FOLLOWING reports in January that Slovak cultural heritage group Matica Slovenská was allowing a magazine produced by its Nitra branch to be published by a far-right organization, Matica removed the link to the magazine from its home site, www.matica.sk. 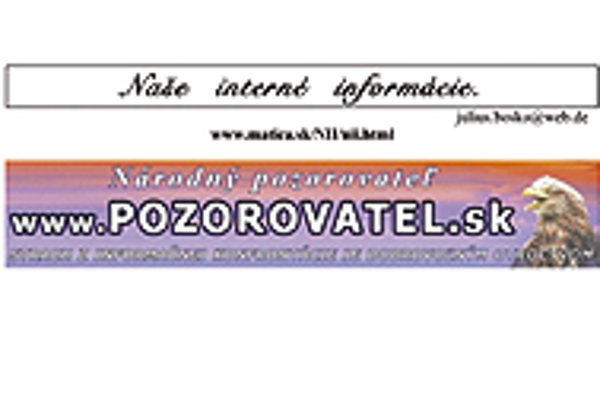 Font size:A-|A+0
FOLLOWING reports in January that Slovak cultural heritage group Matica Slovenská was allowing a magazine produced by its Nitra branch to be published by a far-right organization, Matica removed the link to the magazine from its home site, www.matica.sk.

However, although purged of Slovenské Hnutie Obrody (Slovak Awakening Movement), Matica's site continues to provide a link to Naše Interné Informácie (Our Internal Information, or NII), a periodical for the Slovak minority in Germany. And NII continues to carry an advertisement for the Národný Pozorovateľ (National Observer) web site, which as The Slovak Spectator wrote last week contains texts praising Hitler as well as crude jokes featuring Jews and Roma.

The link between the two groups is confirmed by Národný Pozorovateľ on its website: "Apart from Slovenské Hnutie Obrody, many other web sites and press direct people to Národný Pozorovateľ, such as Naše Interné Informácie, which is created by our compatriots living in Germany. Matica Slovenská offers web space to this bulletin."

While there are many such far-right groups in Slovakia publishing racist literature, Matica Slovenská draws funding from the state - Sk40 million in 2007.

Matica Slovenská Chairman Jozef Markuš told the Slovak press that his organization had cooperated with Slovenské Hnutie Obrody in order to bring together people with different views on March 14, 1939, the day that the Slovak wartime fascist state was declared. However, he told The Slovak Spectator that Matica officially had nothing to do with the regional publication.

"Matica Slovenská's articles of association list its official publications, and Matičné Zvesti is not one of them," he said. "Matičné Zvesti is published by some regional Matica branches to serve regional needs, and has a small print run. They are also published independently, and in its difficult financial situation the Nitra branch was looking for something Matičné Zvesti could "piggyback" on as an insert. One of the few suitable offers came from the group you mentioned."

With Matica rejecting any association with far-right groups, the media questioned Róbert Švec, the chairman of Slovenské Hnutie Obrody, about his cooperation with Národný Pozorovateľ. Švec told the aktuálne.sk news server that "we promote Pozorovateľ because we have a lot of joint themes. But I have no idea who is behind their web page. We'll look into those anti-Jewish and anti-Roma jokes and take a clear position."

Other Matica Slovenská publications do not conceal an approval of the Slovak wartime state and its president, Jozef Tiso, and even cast doubt on the historical event of the Holocaust.

In the January 2005 version of Historický Zborník (Historical Digest), which is published by Matica, a certain Ivan Mrva reviewed a book called Tragédia Politika, Kňaza, Človeka (The Tragedy of a Politician, Priest and Person), written about Tiso by historian Ivan Kamenec.

"He [Kamenec] alleges that Jozef Tiso as a politician, priest and human being cannot escape responsibility for the Holocaust in Slovakia. But we have to ask: Was there really a Holocaust in Slovakia at all, if we work from the Greek definition as "a sacrifice of Jews"? The deportation of part of the Jewish population to be resettled in another state cannot be regarded in any way as a Holocaust."

From 1942 to 1944, around 70,000 Slovak Jews were deported to Nazi death camps, mostly to Auschwitz, and died in the gas chambers as part of the Holocaust.

The Slovak Spectator asked Markuš for an explanation of these statements, but he did not respond.

Kamenec, however, takes a kind view of Matica as an institution with a long history dating back to the mid-19th century. "We have to draw a distinction between Matica Slovenská, which did a lot of good during its history mainly in the sense of national awakening, and the politicized Matica, which we are seeing among its current leadership," Kamenec told The Slovak Spectator.

As for Národný Pozorovateľ, police spokesman Martin Korch told The Slovak Spectator that the police were studying the portal, and that if they believed it promoted ethnic hatred and intolerance, charges could be laid against concrete individuals.