MANY of Slovakia's castles are reported to be in a critical state of disrepair and even though plans are underway for their rescue, some have found that they won't be able to afford the fix. 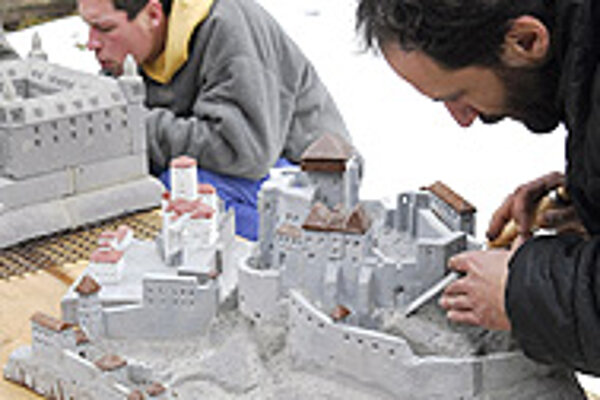 Font size:A-|A+
MANY of Slovakia's castles are reported to be in a critical state of disrepair and even though plans are underway for their rescue, some have found that they won't be able to afford the fix.

Slovakia's 180 castles and chateaus are one of the country's largest tourist attractions. Last year, Spiš Castle alone drew 170,000 visitors from around the world in only six months.

Unfortunately, due to years of neglect, many of these historical treasures are literally crumbling to the ground. Restoration efforts are being made but some administrators are having more luck than others when it comes to finding the necessary funds.

Slovakia's largest castle, located in the eastern Slovak Prešov region, has received Sk15 million from the SPP Foundation to install a sewage system and drinking water to better support the crowds of tourists the castle receives every year.

Kamil Tomčovčík, the castle's administrator, stressed the importance of the project: "This is very important for us because Spiš Castle has really never had its own source of water. As the castle is one of the most visited tourist destinations in Slovakia, we had to deal with the situation by having water brought in by a fire truck almost every day. Finally we're going to have normal drinking water here. Work on the plumbing will start in March and is scheduled to be completed by the end of October [2007]."

The Spiš Museum in Levoča has promised further funding that should go toward restoring some of the older parts of the castle.

One of the main priorities is the castle's Romanesque palace, followed by parts of the courtyard that have fallen into disrepair.

Bytča Wedding Palace: One of a kind

Commissioned by Hungarian palatine Juraj Thurzo in 1600 as a place to marry off his seven daughters, this chateau just outside the town of Žilina in northwestern Slovakia will soon be undergoing reconstruction.

Its wedding hall was the largest room in the region at the time, and even today experts still consider it unique: "It's not possible to find a comparable building in all of Central Europe," said Marián Mrva, director of the Považské Museum in Žilina.

It was given a steel roof and used as a House of Culture under communism. Now its walls are suffering under the weight and its structural problems are made worse by the dampness of the ground that it was built on.

Funds from the state budget have been earmarked for its repair, and Pavol Holeštiak, director of the Žilina Region Office, has reported that the project could receive over Sk40 million from a Norwegian financial grant. "They will decide whether to support the project in the next few months, and we expect to see some real progress within the next half year," he said.

Even though it has been five years since work started on Bratislava's outermost walls, which border the Old Town across the New Bridge roadway, the needed repairs have been left out of the city's budget once again this year.

Stretching from St. Martin's Cathedral in the south to Kapucínska Street in the north, the historical wall is owned by the city. It was rented to a medieval re-enactment group from 1993 until 2000, and in 2001 was put in the care of Paming, an organisation that cares for historical monuments and which is partly financed by the state.

The whole wall is in need of repairs, and the construction of shops and a café is also being considered. The cost of the project is estimated at around Sk30 million.

Paming was hoping to have the renovation completed between 2006 and 2008, but once again the project has been left out of the city budget.

"We would like to make at least partial repairs to the wall," said Zdenka Turzíková of Paming, "so we will request that changes be made to the budget."

However, the municipal government is currently working on a four-year plan for the city's development and has said that it will not be able to give a definite timeframe for the completion of the wall until the plan is finished in April or May.

Built in the 10th century, and then later rebuilt and extended, Trenčin Castle in now literally falling down before people's eyes.

In 2003, a 15m by 10m piece of a 15th-century wall collapsed as a crowd of people watched, and just last year a rock fell to the street below, almost hitting a woman walking past.

According to research on the castle, the recent instability is due to water seeping into the wall and freezing.

The castle has been under the care of the Trenčín Region Office since 2002, and at the moment officials are looking for funding to save the historical monument.

Šajbidorová estimated the cost of the project at Sk79 million.

"[We have applied for] government support as well as for a grant from Norway. It's useless to suggest that we might be able to make complete repairs for a lesser sum. [Sk79 million] is not an exaggeration."