Sunshine through the rain

TOLSTOY wrote "all happy families are alike; each unhappy family is unhappy in its own way."
At first, it's hard to know which applies to the Hoover family, stars of the brilliant new comedy Little Miss Sunshine, which premiered in Slovak cinemas on February 1. 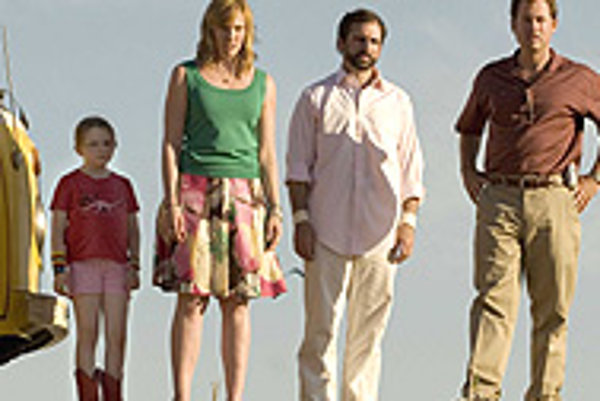 TOLSTOY wrote "all happy families are alike; each unhappy family is unhappy in its own way."

At first, it's hard to know which applies to the Hoover family, stars of the brilliant new comedy Little Miss Sunshine, which premiered in Slovak cinemas on February 1. In the film's first extended scene, we learn about their individual struggles through interactions around the dinner table.

Richard (Greg Kinnear) is a wannabe motivational speaker, who constantly lectures his family on how to win in life; Grandpa (Alan Arkin) was kicked out of his retirement community for using drugs; Dwayne (Paul Dano), the Nietzsche-obsessed teenaged son, has taken a vow of silence until he makes it into flight school; and Uncle Frank (Steve Carell) is a former scholar recovering from a nervous breakdown and suicide attempt.

Only Shery (Toni Collette), who's struggling to keep her family together and quit smoking, and chubby, innocent Olive (Abigail Breslin), who dreams of winning a beauty pageant, seem to have their heads screwed on right.

Yet they eat dinner together, which is more than many families can say these days. And when Olive gets a shot at competing in the Little Miss Sunshine beauty contest in California, the whole family, albeit with some initial resistance, packs into their broken down jalopy to make the 700-mile trek.

What follows is a classic road movie with heartwarming twists. Obstacles are overcome, and dreams are broken in a fraction of the time it took them to be made. Dwayne discovers he is colour blind and, therefore, cannot be a pilot; Richard's plans for a book based on his motivational speeches falls through. Even the car breaks down completely and has to be push-started every time.

But instead of falling apart, the Hoovers pull together. In one of the most touching scenes, Grandpa works his way to the front of the car to reassure Richard, who has just heard about his book deal, that the family is proud of him for trying, and loves him. Richard can only utter simple thanks, but the effect is clear.

Similar moments are peppered throughout, including the hilarious conclusion to pudgy little Olive's pageant, which show just how close the family has grown.

The entire cast is exceptional. Kinnear, who played a more serious role in As Good as It Gets, gives a wonderful comic performance here, while Carell, better known for The 40 Year-Old Virgin, is intense and sympathetic. Alan Arkin strikes the perfect balance of crass, yet tender. And the film's two young stars, Abigal Breslin and Paul Dano, steal the show.

It's no surprise Little Miss Sunshine received a rare standing ovation at the Sundance Film Festival 2006 and recently earned an Oscar nomination for Best Picture.