GOVERNMENT sessions will officially cease to be public as of March this year, according to a change to an obscure law approved by parliament on February 9. 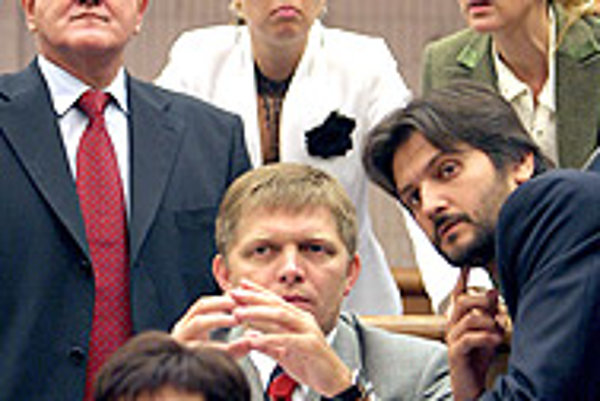 Font size:A-|A+0
GOVERNMENT sessions will officially cease to be public as of March this year, according to a change to an obscure law approved by parliament on February 9.

The change went through as part of a revision to the Law on the Tripartite, submitted by Labour Minister Viera Tomanová. It says that, unlike parliamentary sessions, which the public can attend, government sessions henceforth will be closed to the public. Critics fear that the government will use the rule to refuse to provide sound recordings of cabinet sessions, which until now have been accessible through the Freedom of Information Law.

The opposition also suspects that the government does not want the public looking over its shoulder, and that it hid this important change in an unrelated law - the Tripartite Act governs relations with labour and business - in order to try and sneak it past civil society watchdogs.

"The government can now reject requests for sound recordings by arguing that government sessions are not public," former Justice Minister Daniel Lipšic said, making it impossible for the public and even opposition MPs to keep track of what the government is doing.

Earlier last week, MP Edita Angyalová from the ruling Smer party also attempted to push through a legislative change that would have limited public access to information through a revision to the Freedom of Information Law.

According to her proposal, which was eventually withdrawn from parliament following protests by the opposition and the NGO sector, the authorities would have been entitled to deny public requests for information that they judged to be "clearly unreasonable".

Angyalová argued that some state offices have literally been flooded with nonsensical requests for information, which has left them paralyzed.

But although the opposition helped prevent this revision from being passed, it was unable to preserve public access to government sessions.

Miroslav Číž, the deputy speaker of parliament, argued that the content of cabinet sessions should be confidential because "the information [discussed by the government] could have an impact on economic and political affairs as well as on the country's foreign interests".

On the other hand, it was the previous government that approved the Freedom of Information Law, which was seen as a major step towards greater transparency in public administration.

The current government is now suggesting it does not wish to maintain the existing level of openness with the public. Angyalová's effort to change the information law was regarded as a concrete example of that trend.

"We [in Slovakia] are so disoriented by democracy that we would probably relieve ourselves in the middle of the city because everybody wants to know everything in the name of democracy," said Ján Slota, the leader of the far-right Slovak National Party (SNS), one of the three ruling coalition parties.

Opponents of the approved revision, however, say that if the government tries to make sound recordings inaccessible to the public, it could be breaking the law.

"The fact that the law states that cabinet sessions are not public has no impact whatsoever on the provision of information on the basis of the Freedom of Information Law," said Ondrej Dostál, the deputy chairman of the non-parliamentary Civic Conservative Party.

"The government was probably trying to limit access to sound recordings of cabinet sessions with this proposal, but this law does not achieve that goal," Dostál added.

Members of government have not taken a clear stand on how the new law will be interpreted.

Culture Minister Marek Maďarič admitted that opinions differed on whether sound recordings should remain accessible to the public.

"Some say that they should be left [accessible]. However, the point is that internal government debates have become non-public," he said.

"The government operates in a different way from parliament and needs peace and quiet for its sessions. So internal debates are non-public, but all materials are still public and the results [of the sessions] are public... The Freedom of Information Law has not been affected. Full stop."