PM ROBERT Fico's much-publicized five-day trip to China seems to have brought no immediate results beyond a vague promise allegedly made by Chinese government officials to support Slovak business interests in China. 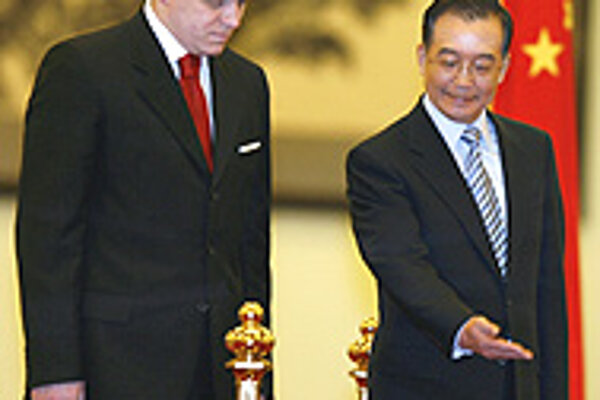 Criticism of Fico's decision to visit China climaxed shortly before his departure as human rights groups called on the PM to be sure to raise the issue of human rights in communist China at least once.

But despite statements that human rights was part of Fico's agenda for the trip, no member of the Slovak delegation is known to have raised the issue even once while in China.

The Slovak entourage, which included entrepreneurs trying to forge closer ties with their Chinese counterparts, focused on business issues as part of the Fico government's proclaimed foreign policy orientation towards economic concerns.

Yet on returning home from China, Fico was unable to name any concrete project or deal that had been agreed on during the trip.

"I had eight projects prepared - eight concrete projects. We talked about these companies, and the Chinese government promised that these situations will be monitored much more carefully than anything else," Fico said for the STV public broadcaster after arriving back in Bratislava on February 9.

Fico reported that contracts were signed in the areas of agriculture and schooling, and said that he planned to urge Slovakia's economy and agriculture ministers to maintain ties with China.

"We simply have to go there. That's what we have to work on. Their market is incredibly important for us. The whole world goes there and so must we," the PM said.

Trade statistics show that 3.5 percent of Slovak imports come from China, while only 0.5 percent of the country's exports go there.

Opponents of Fico's trip noted the negligible trade turnover between the two countries, and criticized the PM for neglecting to bring up the issue of human rights. They argued that taking a stand on human rights in China should be part of every democratic leader's agenda.

According to Pavol Hrušovský, leader of the right-wing Christian Democratic Movement, the Slovak PM's foreign policy "looks as if he is trying to narrow it down to merely looking for new economic interests for Slovakia.

"That's fine, but on the other hand we mustn't avoid the political dimensions. We shouldn't be afraid of criticizing things or calling a spade a spade in the area of human rights, even if it may be unpleasant. Let's not say that just because Slovakia is a small country it can't afford to criticize large states," Hrušovský said.

According to Agriculture Minister Miroslav Jureňa, who was also on the China trip, the need to discuss human rights never came up.

"We didn't find it necessary, because there is already an ongoing dialogue between China and the European Union [on these issues]," the minister said.

With its huge trade potential, China has become an economic target for many more mature democracies. In this sense, Fico's premise for going to China has not been doubted by foreign policy analysts.

"China is a priority for the EU in terms of both business and politics. It is a potential superpower, and forming business and political contacts is the basis for securing any future advantages from bilateral relations," Ivo Samson, an analyst with the Slovak Foreign Policy Association, told The Slovak Spectator.

Samson added that while it still makes sense to bring up human rights in China, "it also requires a certain amount of political will. The Slovak prime minister does not have the will to criticize the communist system, and he apparently did not feel like doing any extra work in China.

"Criticizing the state of human rights in China, or bringing up the Tiananmen Square Massacre in Beijing in 1989, is not really part of an EU politician's standard agenda. It's a matter of their personal choice," Samson said.

According to Culture Minister Marek Maďarič, critics of the Slovak delegation's silence on human rights should realize that China is a different civilization and cannot be expected to adopt all of Western Europe's standards.

"China has over one billion inhabitants and in terms of civilization it has followed a different path. It is completely different from European civilization and we cannot expect that they will automatically and immediately adopt European values. That's a bit naive," Maďarič said.

"We should concentrate [on problems] here instead of making a fuss over raising these issues with China," he said.