"National carrier" put out of its misery

SLOVAKIA'S national carrier, Slovenské Aerolínie (SA), announced on February 6 that it would soon file for bankruptcy. SA director Christiane Böhm-Mayer said the airline had taken the decision after its majority shareholder, Austrian Airlines, took back two of its three operating aircraft. 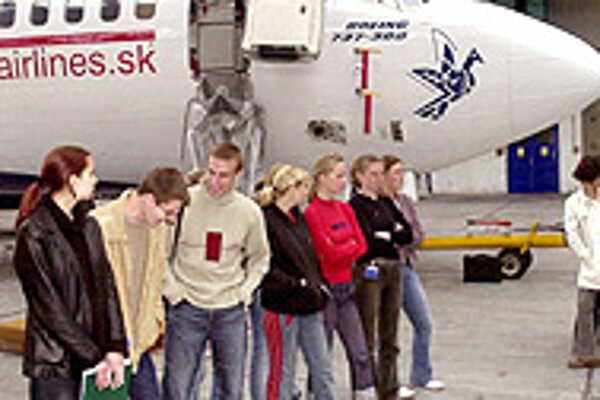 Font size:A-|A+
SLOVAKIA'S national carrier, Slovenské Aerolínie (SA), announced on February 6 that it would soon file for bankruptcy. SA director Christiane Böhm-Mayer said the airline had taken the decision after its majority shareholder, Austrian Airlines, took back two of its three operating aircraft.

"We have had to cancel all air operations, and we are preparing further steps. But without flights our company has no future, and we will have to file for bankruptcy," Böhm-Mayer said.

Austrian Airlines reclaimed a Fokker 100 and a Boeing 737-300 aircraft on January 31 as part of its continuing feud with the Slovak government, while an Australian leasing company took the third of SA's airplanes.

The government indicated that it would not make any moves to try to bail SA out of its troubles. "It's a company like any other, let it act in compliance with the Commercial Code," said Transport Minister Ľubomír Vážny.

The state has a one-third stake in SA. Before Christmas last year, Austrian Airlines management warned SA that it would halt its operations as of February 2007 if it did not repay Sk473 million in debt.

Austrian Airlines gained an almost 62-percent stake in SA at the end of 2004 through a "backdoor privatization" with the agreement of then-Transport Minister Pavol Prokopovič after guaranteeing a Sk200 million (€5.3 million) loan that SA took to avoid bankruptcy. In January 2005 AUA then increased SA's assets by Sk114.6 million (€3 million), gaining a controlling stake.

Since that time, Austrian has been in a dispute with the Slovak government over a €6 million SA debt that the firm says the former government promised to pay. The Fico government, which is against privatization in principle, failed to make good on the debt by the deadline Austrian set of December 31, 2006.

The bankruptcy leaves SA unable to follow through on Sk500 million in contracted summer charter flights. According to the STV public broadcaster, several companies have indicated interest in SA's foregone business and flight crew, including the small Seagle Air carrier currently operating in Slovakia.

"We see great opportunities to do business abroad in the winter as well," said Seagle Air director Peter Hanák.

"We are currently looking at the financing that would be necessary to operate large-scale air travel and charter travel in Slovakia," said Peter Beník, director of the small VIP Air operator.

The state has been trying to operate an airline in Slovakia for over 11 years now. Unsuccessfully: SA never showed a profit in the nine years it actually flew.

Following the division of Czechoslovakia, the air transport sector in Slovakia was in a difficult situation. The country had no network of air destinations, not a single airplane, and few direct air links with the rest of the world. When the Mečiar government decided in 1995 to create Slovenské aerolínie as a national carrier, it came at an unfavourable time, as Europe was liberalizing air transport.

The state originally held a 34 percent stake in SA, with the rest in the hands of the Devín Group (part of the Slovak-Russian Devín Banka) and the Wili company of current HZDS party MP Viliam Veteška. In 1996 the airline got an operating license, still without owning a single plane.

SA then acquired a Tupolev TU 154M jet through the settlement of Russia's debt to Slovakia, leading to the state's securing a majority stake in the airline. SA's first direct flights were to Moscow and Košice, with charter destinations in southern Europe.

After the 1998 change in government, however, new Transport Minister Gabriel Palacka took the airline's license and status as a national carrier due to its murky ownership structure. The ministry also found that SA was using its airplanes illegally. However, following talks with SA management, the ministry returned the airline's license in July 1999.

Palacka's successor, Jozef Macejka, tried to get rid of the money-losing company in 2000, but SA's other shareholders refused to exercise their right of purchase on the state stake. As a result, in November 2001 the state decided to give SA the three aircraft it had until then rented, thus raising SA's basic capital and the state's share in the airline. By the end of 2002 this stake had climbed to 90 percent.

At the same time, the low cost operator SkyEurope was starting up, representing fierce competition for the state-owned carrier. SA's Tupolevs used much more fuel than equivalent-capacity Boeings, while it was also burdened with unprofitable routes like Poprad/Tatry - Moscow, Bratislava - Tel Aviv and Bratislava - Warsaw.

In late 2004, Austrian Airlines de facto secured two-thirds of SA shares, but in a secret appendix to the deal, Transport Minister Prokopovič promised that the state would pay any SA debts over Sk200 million.