VLADIMÍR GODÁR's new CD, Mater, counts as yet another fascinating release by arguably the most prominent and versatile Slovak composer today. 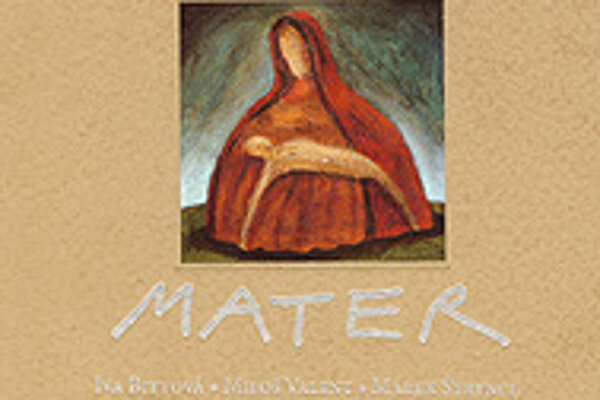 VLADIMÍR GODÁR's new CD, Mater, counts as yet another fascinating release by arguably the most prominent and versatile Slovak composer today.

Born in Bratislava in 1956, Godár trained in the classics, but is known internationally for his film scores, which he began composing in 1984. Shortly after the fall of Communism, he formed a Williams-Spielberg-like cooperation with Slovak director Martin Šulík, scoring all 7 of his films over 14 years. The music to Krajinka (Landscape) earned Godár the Best Music Award at the Flanders International Film Festival in 2001.

As someone who cares deeply about music history, Godár has also been a driving force in the effort to revive the works of 19th century Slovak composer Ján Levoslav Bella. And he has formed his own close working relationship with Czech violinist and singer Iva Bittová, who uses a unique mixture of emotion, body language, and vocal technique to blend Czech folk and contemporary music.

"The first time I worked with Iva was while making Krajinka," Godár said recently in an interview with a Slovak music website. "When she asked why I wanted her I said 'Your voice is pure, you sing understandably, and you have that certain emotion. What else could I want?'"

Mater is Godár's examination of the Catholic cycle of life, death and resurrection as demonstrated through the life of Christ. As he states in the CD's liner notes, "the protagonist is Woman-Mother who gives life, shapes [it], buries and mourns and praises. This is complemented by two meditations on the passing of time - the musings of an anonymous yeshiva student and the reflections of a modern-day intellectual."

To achieve the right musical and emotional content for the role of Woman-Mother, Godár once again turned to Bittová.

"[Mater's] compositions for female voice and period instrument ensemble were in many ways inspired by Iva: her art, personality and perhaps even her life," he writes. "A 'depth of time' is very much present in her art, going back to the very beginnings of music and reaching all the way to our problematic present."

Mater begins with Maykomashmalon, a song in Yiddish set to a slow, meditative accompaniment. The breathy opening string solo evokes the sound of a shofar, and Bittová's pure tone imitates Irish folk music, which turns out to be one of the CD's recurring themes.

The text exudes Schubertian bleakness of the external - "my boots are getting worn out, and the streets are wet and muddy; I don't have a winter greatcoat, that can warm me as I study - and the spiritual - "thus I sputter in the chapel, like the candle burning weakly; till I too will be extinguished, near the East Wall, dying meekly - which symbolizes the hopelessness that existed before Christ's birth.

The next track is Magnificat, the prayer of thanks the Virgin Mary chanted following the Annunciation. It opens with Bittová chanting 15th century Biblical text in Czech with a system of strong and weak beats similar to the recitative heard in Italian Baroque operas, then is transferred to a choir, led by choirmaster Dušan Bill. As the choir emits soft, drawn-out repetitions of the word 'magnificat', the strings chime in with sharp, jarring disonances that express the burning anticipation of the Lord's arrival. This back-and-forth between the choir and strings continues for quite some time, and, although the music gradually builds louder, it never loses its repetitive, meditative centre.

The track Ecce Puer is where the CD's concept switches from contemplations about life to lamenting death. Set to a text by Irish writer James Joyce upon almost simultaneous news that both his father and grandson had died, it is a chilling reflection on mortality's fragility.

Godár set this piece to instruments common in seventeenth-century music, such as a harpsichord and harp, because it was inspired by the madrigal Amor by Claudio Monteverdi, one of early opera's greatest composers. As the harpsichord roles chords, Bittová's delivery turns especially mellifluous, carefully descending each line and, at times, uttering painful words with a thin squeak.

This leads to the CD's central track, Stála Matka (Mother Stood), a cry of compassion for the Virgin Mary, who saw her only son crucified. "Her soul, sighing, anguished and grieving was pierced by a sword," the Biblical Czech text reads. "Who would not share her sorrow, seeing the loving Mother grieving for her Son?"

Bittová churns the tormented melody with the support of the chamber orchestra, then sings full voice as she begins to plea: "O Mother, fountain of love, make me feel the power of your grief that I may mourn with you."

Many times, the chamber orchestra floods forward with the melody, but pulls back once it reaches the peak of the phrase. Like the Magnificat, this is repeated over and over throughout the piece by singer and ensemble, both of whom deny the listener what's expected. The result is the almost torturous feeling of having your emotions "on the tip of your heart" without hearing them fully expressed.

Mater has met with acclaim abroad. When it showed at the Enjoy Jazz festival in Germany, critics called Vladimir Godár a "masterful composer of modern classic music" and the piece a "highly emotional performance carried out by an extraordinary ensemble."

But more than that, it is a confession of faith by a great music historian and composer, as well as proof that the tradition left behind by Slovakia's greatest modern composers - Eugen Suchoň and Ján Cikker - is very much alive and well.