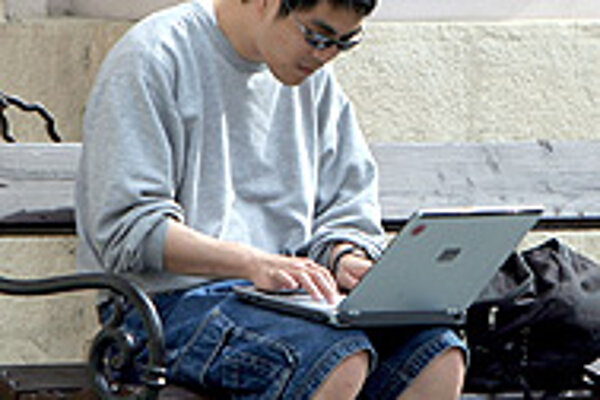 Font size:A-|A+
THE CENTRAL Slovak town of Martin has started offering free unlimited internet access to all its inhabitants.

Martin residents who apply for the service will be granted unlimited internet access and will also be given a complimentary phone line from which they can make free local calls.

Launched on February 16, the project's main goals are to provide the public with better access to information, improve their connection with the local bureaucracy, and support the town's socially disadvantaged.

The project's architects hope to help catapult this town of 60,000 into the Information Age and they see widespread internet usage as an essential step in this direction. The largest obstacle in the way of internet penetration in Slovakia today is the high monthly service charges involved, so the town of Martin decided to cut this financial Gordian knot and offer the services for free.

"As we knew that many families are not capable of paying monthly internet bills, which usually come to several hundred crowns, we decided that we would provide the internet free of charge," said Martin's mayor, Andrej Hrnčiar.

The town of Martin carried out the project in cooperation with Gaya, a company that owns the telecommunication infrastructure in the Turiec region and also in the city of Martin itself; their total network covers approximately 50 kilometres of optical routes.

According to Gaya's general director, Roman Zábronský, those interested in free internet will have to cover the installation and connection costs themselves, but afterwards all services will be provided for free. Connection costs come to approximately Sk2,000 in residential areas where blocks of flats with connections to the optical network already exist, and around Sk7,000 in detached houses, which will have to connect to the network using Wi-Fi technology.

"Of course we'll make it possible for clients to pay for the equipment on an instalment plan," said Zábronský.

According to Zábronský, the necessary information has been posted on billboards around the city and can also be found on the company's webpage, www.bezplatnyinternet.sk (toll-free internet).

Those who wish to take advantage of the offer are able to register by phone.

"After registering, clients will be given a unique phone number that they will be able to use to check the progress of their installation and connection to the network. We have tested the service in a trial run and we are now ready to connect around 7,000 people living in detached houses and practically innumerable people living in blocks of flats around town," Zábronský said.

Martin's mayor, Andrej Hrnčiar, praised the project at a press conference on February 16, saying that it should help facilitate communication between the town's citizens and the local government, as well as offer them the option of submitting administrative forms electronically.

"The first thing that we want to do is to improve access to public information so that citizens will be better informed about town events and the different projects that are being organised," said Hrnčiar.

Through e-government, Martin residents will be able to download the different forms and applications that they need and will be able to send them to the town hall electronically. "We also want to introduce a system that will allow people to monitor the status of their current requests and submissions," Hrnčiar said.

Nataša Patrová of Martin's town hall told The Slovak Spectator that the project had not dipped into any public funds and that it would continue to be financed completely by Gaya.

"We are trying to provide services in areas where other operators have been considering investing. The project has helped from the point of view of building up a complex network and at the end of the day it has proved to be profitable for us," Gaya's sales manager, Miroslav Hanajík, told The Slovak Spectator.

According to Hanajík, interest in free internet has been growing continuously since the project's launch. "We are pleased that older inhabitants are also starting to show interest in being connected to the internet. We want people to think of the internet as a standard household utility like electricity or gas," he said. "They should not be prevented from having it because of their financial situation."

Free access to the internet is already available in quite a few other Slovak town centres, most particularly in Bratislava, where open wireless connections can be found on the city's Primaciálne, Hviezdoslavovo, Hlavné, and Františkánske squares. The service is offered using wireless Wi-Fi technology, which users do not need cables, sockets, or a mobile phone to use. They only need a laptop with a Wi-Fi card, which will enable them to connect to the internet.

Visitors to and residents of the central Slovak town of Prievidza also have access to free wireless internet in the town's centre. Ivona Vojtášová, Prievidza's town hall spokeswoman, informed the SITA news agency that users can use the wireless network for one hour at a time after which they will be disconnected and will have to wait for an hour before connecting again. The system can currently handle only 30 users at one time. Vojtášová reported that the Wi-Fi service costs around Sk200,000 a year to operate.