A PUBLICITY campaign has been launched by Slovakia's homosexual umbrella group Inakosť (Otherness) to help raise awareness of the country's gay and lesbian community. 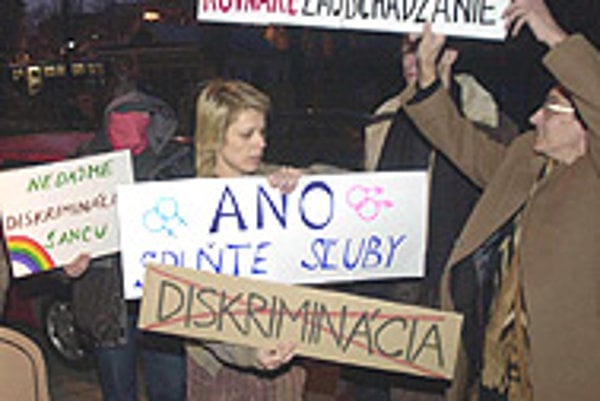 Font size:A-|A+
A PUBLICITY campaign has been launched by Slovakia's homosexual umbrella group Inakosť (Otherness) to help raise awareness of the country's gay and lesbian community.

The project, which will run for the whole of this year as a part of the European 'Year of Equal Opportunities for All', a designation that was set in 2005 by the European Commission as a concentrated effort to promote equality and non-discrimination in the EU.

Slovak gays and lesbians want to make use of this opportunity to raise public awareness of their community. Their campaign, entitled 'We are here - the days of otherness', was launched on February 21.

"Our project's main aim is to make Slovak gays and lesbians more visible as an equal part of society. Together with other minorities in Slovakia, they contribute to the development of society in the Slovak Republic just as much as anybody else," said Inakosť's Július Kolenič at a press conference held on February 22.

Inakosť announced that the campaign will consist of various media events, seminars, and the promotion of the establishment of a help line at the Slovak National Centre for Human Rights.

"We are not asking for anything out of the ordinary. All we want is for our human rights to be respected," said Kolenič.

Homosexuals complain that they still encounter numerous problems in everyday life. One example is their difficulty when trying to obtain information about their partners' health condition, which Slovak doctors only provide to family members.

"Last year my partner died and when I contacted the authorities I repeatedly ran up against the argument of the 'rights of the bereaved family', in which I was not included," said Marián Vojtek, who is one of Inakosť's founding members.

The strongest ruling party Smer, which describes itself as being social democratic, is generally expected to be sympathetic to the homosexual cause as this is a normal part of the agenda of other social democratic parties around Europe.

Smer's Monika Flašíková-Beňová, who is also one of Slovakia's MEPs, even suggested that it was up to Smer's chairman, PM Robert Fico, to promote this cause within the ruling coalition.

"I am convinced that a social democratic party, which Smer undoubtedly is, would have moves supporting this agenda prepared, but I can't say just now what the time frame for the agenda's submission to parliament will be," said Flašíková-Beňová in an interview with the TA3 news channel.

Given the composition of the ruling coalition, however, there is good reason to believe that registered partnerships for homosexuals in Slovakia will remain a wish for the future rather than a possibility that will be realised any time soon.

Smer's ruling partners, the Movement for a Democratic Slovakia and the Slovak National Party (SNS), are both known for their sometimes extreme political and social stances.

SNS leader Ján Slota in particular is known for his controversial opinions on Slovakia's minorities, national, racial, and sexual. Before the June 2006 elections, Slota encouraged voters to support him in the polls if they wanted to "help prevent perversities such as homosexual marriages".

Supporting homosexuality is obviously not on the SNS' agenda, but most of the party's members hold to the standards of political correctness when commenting on the possibility of the government recognising homosexual partnerships.

"As far as I know, this issue is not a part of the government's programme, so I'd say it's irrelevant," said Rafael Rafaj, the head of the SNS parliamentary caucus.

Homosexuals do not find much support among the opposition parties either.

MP Peter Gabura of the opposition Christian Democratic Movement recently angered the homosexual community when he described them as "deviant and sick people" who should go in for professional help.

"These are just the kind of statements that encourage discrimination," said Kolenič.