PRIME Minister Robert Fico has announced that the Mochovce nuclear power plant's last two units, which were left unfinished when the facility was opened in 1998, should be up and operating within the next five years. 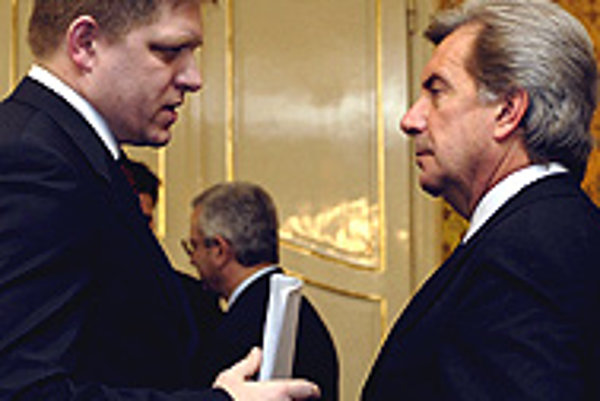 Font size:A-|A+0
PRIME Minister Robert Fico has announced that the Mochovce nuclear power plant's last two units, which were left unfinished when the facility was opened in 1998, should be up and operating within the next five years.

The Italian power company Enel agreed to take the job on a year earlier than originally planned after a discussion between Enel boss Fulvio Conti and the prime minister on February 23.

Work at Mochovce will therefore be finished a year earlier than specialists in the field had originally estimated.

"Based on the available data, I would say that it is possible," said Juraj Kopřiva, spokesman for Slovenské Elektrárne (SE).

Enel took ownership of SE last year when it bought up 66 percent of the Slovak power company's shares.

The prime minister and Conti have denied that the government had made any promises to Enel in return for moving work at Mochovce forward, though there have been speculations in the Slovak press that Enel's increased investment in Slovakia's nuclear sector might be in return for the prime minister's taking a more reasonable approach to the Gabčíkovo issue.

The previous government, led by Prime Minister Mikuláš Dzurinda, signed a 30 year lease on the Gabčíkovo hydroelectric plant with Enel. Fico has since attacked the contract as being "null and void" and pushed for the plant to be put back under state control.

Even though Fico is not about to drop the issue, he has agreed to leave it in the hands of the experts.

"We agreed that we would form a task force whose job will be to go through and examine all the arguments that are on the table today," he said. "We [in the government] don't have any problems with Enel, but rather with the gentlemen who were treading these carpets before July 2006," he continued, referring to the previous cabinet who lost last year's elections.

SE is planning to start construction work at Mochovce, located east of Nitra, in the second half of 2007 and will employ around 5,000 people in the project over the next five years.

The Fico government has promised that they will support the project by helping arrange all the necessary permissions and documents.

The prime minister, whose cabinet has confirmed that he is quite nuclear oriented, did not hide his satisfaction with Enel's promise to move work forward a year. Slovakia's power situation has been a concern of his since two of the four reactor blocks at Jaslovské Bohunice nuclear plant near Trnava were taken off line in order to satisfy entry terms laid out by the European Union, who considered the plant to be "unsafe".

Fico described the move as "energy treason" and has been anxious to find a way to stabilise the country's power situation ever since.

In the past, the prime minister criticised Enel for its reluctance to finish the Mochovce project, but after his meeting with Conti he said that he would like to discuss the possibility of further cooperation on nuclear projects with the Italian power giant. He added that possible locations for such projects include the already functioning Jaslovské Bohunice site north of Trnava and a greenfield site near the town of Kecerovce, east of Košice, which was first considered as a possible nuclear site 30 years ago.

The expenses involved in finishing the two Mochovce blocks should not come to more than Sk70 billion, but the exact sum will not be known until after the project analysis is finished in April.

Enel plans to finance the project using profits earned from SE and credit. Fico has promised that not a crown will come from the state budget.

Economy Minister Ľubomír Jahnátek confirmed the PM's statement: "We didn't grant Enel any special advantages or economic subsidies," he said. "We made it very clear that we're not going to take part in the financing."

The state, as the third owner of SE, will only participate in the completion of Mochovce indirectly. As all of the company's profits will be put toward further investment, all of SE's shareholders can be sure that they will not be seeing any dividends for the next four years.

Conti announced after his meeting with the prime minister that SE wants to invest Sk110 billion crowns in building new energy sources in Slovakia, Sk30 billion more than originally offered near the end of last year. Sk70 billion is earmarked for Mochovce and the other Sk40 billion will be put toward modernizing the Vojany thermoelectric plant, building a new hydroelectric plant on the Ipeľ river, and possibly investing in biomass processing.