AS TWO of the victims of the Nováky explosion were buried on March 7 and 8, attention focussed on the causes of the blast, which killed three people and left five missing. 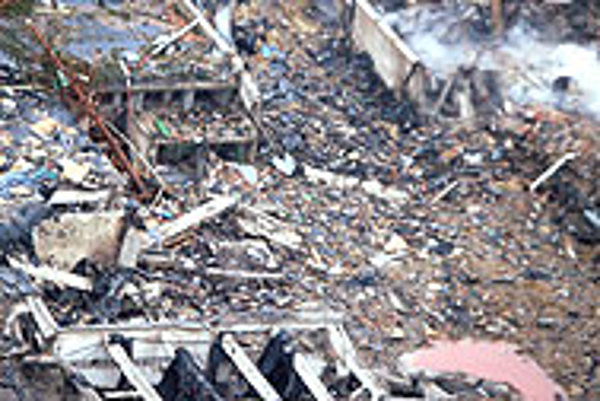 Font size:A-|A+0
AS TWO of the victims of the Nováky explosion were buried on March 7 and 8, attention focussed on the causes of the blast, which killed three people and left five missing.

The explosion took place on March 2 in the western Slovak town of Nováky.

The government has promised compensation of Sk1 million from its own coffers to the families of the missing and deceased, to which the Defence Ministry, the Labour Ministry, and the Union of Slovak military employees will add a total of Sk175,000.

Investigators now believe the blast, which levelled an area larger than two football fields and left a 20-metre wide crater, was caused by an excess of ammunition being held in the disposal hall.

Defence Minister Robert Kašický said on TV Markíza on March 4 that munitions defusing bomb disposal units such as the one at the Military Maintenance Company (VOP) in Nováky are only supposed to hold as much ammunition in the disposal hall as can be removed over one working shift. He said that the explosion might have been triggered by people not adhering to this rule.

"We believe there must have been excess ammunition in the hall, considering the size of the explosion and the fact that it managed to destroy the whole building," he said.

Witnesses to the catastrophe reported three consecutive explosions around 16:20, followed by a shockwave that broke windows as far away as in Prievidza, some 11 kilometres from the epicentre.

Restaurant owner Marcel Pažický of Opatovce nad Nitrou, about one and a half kilometres from Nováky, said he ran outside when he heard the first explosion, thinking that his car might have blown up.

"We were in my restaurant when we heard the first explosion," he told the Pravda daily. "It was followed soon after by the second, which completely lit up the smoke cloud... it was full of fire. Then a third explosion came... After that we felt a strong shockwave, which must have been really strong since we felt it from over a kilometre and a half away."

He said that there was a gap of about a minute between the first and the second explosions, while the third came right after the second. "The shockwave was so strong that we were sure that many people must have died."

"It's scorched land," said Štefan Svitok of the Health Ministry, who arrived on site to coordinate rescue efforts. "There have been small explosions in the past, but this was catastrophic," he told the Sme daily. According to Sme, a disaster of this scale has only been seen in countries like China and Russia, but never before in Western Europe.

Fire-fighters from Nováky and other nearby towns were dispatched to the site and managed to get the fire under control, but stayed until around 07:30 on March 3 to cool down the remaining unexploded ammunition at the site, which included around 3,000 artillery grenades.

Kašický called a government crisis meeting at around 21:00 with Prime Minister Robert Fico, Interior Minister Robert Kaliňák, Environment Minister Jaroslav Izák, and Police President Ján Packa also in attendance. After the meeting, Kašický and Fico went to the site of the explosion to organise rescue operations.

Thirty people were rescued at the site and treated for injuries in nearby hospitals, including those in Banská Bystrica, Bojnice, and Partizánske.

Two soldiers who took part in the rescue efforts were later taken to the hospital for examination after they both inhaled chemicals and one received first-degree burns at the site. However, Kašický said that people in the area should not be worried as no harmful chemicals had been found in the atmosphere. Air, water, and soil samples were taken from areas surrounding the explosion and no toxic materials that might hurt local inhabitants were found.

According to Defence Ministry spokesman Daniel Gemela, clean-up operations might take weeks, or even months to complete. Workers must proceed carefully due to the danger of hidden live ammunition, which also rules out any possibility of using heavy machinery on the site.

This is the third disaster that the people of Nováky have experienced within the last three years.

"Unfortunately, this is the third tragedy that we've had in our town," said Nováky's Mayor Dušan Šimka.

"The first was the explosion of the Nováky chemical plant in September 2005. Luckily enough nobody was hurt, but there were many injured. A year later, in November 2006, the was the cave-in at the mine where four miners died. But this [explosion at the VOP] was the biggest disaster that we've had yet. We had to call in help from Prievidza, Bojnice, and other surrounding towns. I've never seen so many police cars, fire engines and ambulances here in my life," he said.

According to the Pravda daily, Slovakia became NATO's leading country for defusing ammunition in 2005 and was set to prepare instructions for disposing of obsolete weapons that would be adopted by the other 26 or NATO's member countries.

The daily reported on March 5 that NATO had plans to build a state-of-the-art defusing facility at the VOP, which distinguished itself in the 1990s for its defusing of the Soviet SS 23 rocket system.

Kašický has said that Slovakia will now have to readdress the issue along with its commitments to NATO.