Bugár and Duray square off as SMK congress nears

TENSIONS seem to be mounting within the opposition Hungarian Coalition Party (SMK), which has so far been one of Slovakia's most stable parties with voter support holding at around nine percent. 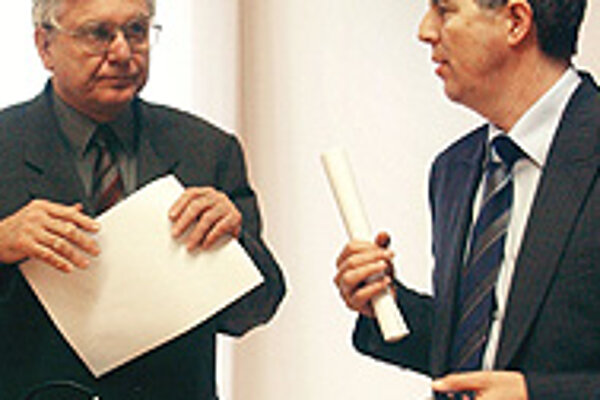 Font size:A-|A+  Comments disabled
TENSIONS seem to be mounting within the opposition Hungarian Coalition Party (SMK), which has so far been one of Slovakia's most stable parties with voter support holding at around nine percent.

The SMK will hold a congress at the end of March where members will elect a party chairman and change their statutes. The idea to tweak the SMK's statutes came from the SMK's co-founder and incumbent chairman, Béla Bugár, who is again running for re-election after eight years as party head.

One of the biggest changes that will be discussed is cancelling the post of SMK vice-chaiman, currently held by party co-founder Miklós Duray, who is far more radical on the score of Hungarian nationalism than the moderate Bugár.

Changing the party's statutes would be a test of power for Bugár, who is the only candidate in the running for the post of chairman so far. The statutes change is expected to pit Bugár against Duray for the first time during their eight years of cooperation.

The SMK was established in 1998 after Slovakia's three Hungarian parties were forced to merge to avoid being barred from elections under Vladimír Mečiar's amendment to the Election Act.

Based on the agreement, Bugár, who was then the leader of the Hungarian Christian-Democratic Movement (MKDH), became chairman of the new party while Duray , then the head of the Coexistence party, became deputy chairman, but with powers virtually identical to those of the SMK chairman.

Bugár denies that the proposed changes to the party statutes are aimed against Duray. When asked the Hungarian Magyar Nemzet daily whether the changes were meant to sideline Duray, Bugár ducked the question, saying that it was not certain whether the post would be cancelled at all.

Duray said that if his post were cancelled he would run for the head of the SMK's national board, its governing body.

Even though the SMK is a one-issue party, representing Slovakia's Hungarian minority, it was always considered the most stable member of both of former PM Mikuláš Dzurinda's governments, and had a reputation for abiding by its coalition committments.

However, after a new government was formed after June 2006 without the SMK, its more radical members started to feel that their time had finally come to confront Bugár.

While never engaging on open conflicts, Bugár and Duray have often differed on policy, with the latter in favour of changing the Slovak-Hungarian border, revisiting the land settlement between Slovakia and Hungary following the Second World War, and pushing for territorial autonomy for the Hungarian minority in Slovakia. Bugár has always seen this agenda as damaging for both the party's election prospects and its internal unity.

According to Duray, under Bugár's leadership the SMK as only been concerned about projecting a positive image. Duray told the Sme daily that since 1998, the SMK had not pushed for any of its most important goals out of fear that the party's coalition partners would find them unacceptable.

Duray is in regular contact with nationalist Hungarian politicians and does not hide his sympathies for the nationalist- oriented policies of Hungary's former prime minister, Viktor Orban.

Duray caused an uproar in June 2006 when he complained at a conference on autonomy in Budapest that ethnic Hungarians living in Slovakia were denied the right of self-determination. The Slovak media cited him as saying that "Albanian citizens in Kosovo might get it [autonomy] sooner than Hungarians in Slovakia. We'll keep our fingers crossed for them."

Duray said he does not intend to give up his post at the SMK congress and instead wants even wider powers. Bugár, on the other hand, argues that Duray has not even used the powers he now has in his current post.

"As executive vice-chairman, he was responsible for taking care of the basic organization and structure of the SMK. However, whenever a problem occurred, I was the one who had to solve it," Bugár said.

The SMK leader has used the same argument to claim that the executive vice-chairman post is unnecessary. The SMK's district wings will be canvassed in March to see whether there is the will at the lower party levels to make the change.

Bugár has said he would be happeier if he faced an opponent for the top party post.

"It hasn't been discussed much yet, but there are some who might be considering it," he told the ČTK news wire.

Bugár said that SMK Deputy Chairman Pál Csáky is the most likely contender, and said he would keep his fingers crossed for him. Duray also said Csáky would make a good chairman for the SMK as he is an "educated and rational man who was also a good deputy prime minister".

However, Csáky has not said whether he will run.

"We will see when the time comes," he said.

Although Duray has said he does not want to run for chairman, territorial autonomy remains one of his priorities.

He described autonomy for the Sme daily as a type of "democratic self-administration".

"We could define the principles of cultural or personal autonomy in cooperation with Slovak experts," he said.

However, Bugár claimed that Duray was just trying to gain the pre-election support of congress delegates.

"For the last eight years, Mr Duray has been a member of a team that could have proposed anything within the party, but he never did, unlike those of us who constantly strove to ensure that minorities had as many rights as possible in culture and education. Now it's time to concentrate on other things than Mr Duray's private fantasies," Bugár said for Sme.