BRATISLAVA'S buzzing business life has outgrown the blocky architecture that it inherited from its socialist past and is now searching for more interesting and original office designs. The office architecture business has made so much progress that it now has its own category in the CE ZA ARs, the Slovak "Oscars". Last year's prize went to Márius Žitňanský's design for the Montex office building. 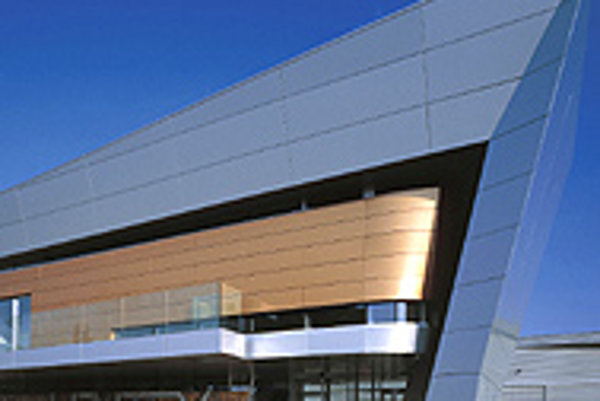 Font size:A-|A+
BRATISLAVA'S buzzing business life has outgrown the blocky architecture that it inherited from its socialist past and is now searching for more interesting and original office designs. The office architecture business has made so much progress that it now has its own category in the CE ZA ARs, the Slovak "Oscars". Last year's prize went to Márius Žitňanský's design for the Montex office building.

The Montex building in Rovinka spans two-floors and has a modern style loggia above the entrance. The inside of the building is an original play of stairs and corridors. Žitňanský deliberately used the same materials that Montex uses in its work (a steel structure with coloured or waved metal plates) along with natural stone, giving it a pleasant country touch.

Žitňanský was awarded the 'CE ZA AR for Architecture' by the Chamber of Slovak Architects for what Bratislava's Main Architect, Stefan Šlachta, called "the best architectural solution in Bratislava".

With a height of less than 50 metres and costs coming to only Sk36 million (€1 million), the Montex building proved that good architecture does not depend on size or price. The National Bank of Slovakia (NBS) tower, the Ingsteel building in Ružinov, and the Tax Office in Petržalka are also on the list of Bratislava's architectural beauties.

However, the main problem for every investor planning to construct a new office building is finding an architect "with golden hands", someone who can design a building that gives the company a positive image at the same time as providing its employees with a pleasant space to work in.

"The majority of administrative buildings are dominant landmarks in a town and also serve as an advertisement. They form the company's image," Šlachta told The Slovak Spectator.

Experts have said that this trend has pushed developers to try to construct buildings that are as economical as possible.

"The current trends try to squeeze the most out of a parcel of land while still keeping three architectural rules - to design a good, attractive, and practical building," said Martin Kusý, the co-designer of the NBS tower.

Kusý said architectural principals really haven't changed since he worked on the NBS tower in 2000.

"Trends in architecture don't change like fashions. Most of them stay valid for 10 to 15 years," he said.

Architect Juraj Hermann disagreed, stating that trends are different now than they were seven years ago.

"There were practically no A-class office buildings in 2000," he said.

Hermann added that these days, construction quality is on the rise and big renters often dictate what they need and expect from a project.

Radomil Kachlík from Global Group, who worked on the Tatracentrum building on Hodžovo Square, agreed with Hermann.

The use of low energy solutions is economically more demanding. However, Metodiy Monev from the Cakov-Makara architect studio said that this still does not discourage their clients from wanting to return to natural sources of light and heating, even if it does mean a higher initial investment.

"Saving energy over the lifespan of a building insures the recovery of the investment because by saving energy, companies save money as well," said Monev.

New and innovative solutions can make a great difference in work conditions, Monev said, citing the NBS cooling system as an example. The bank uses chilled ceilings instead of air conditioning to cool down the offices.

"There is no extra noise in the office or a draft blowing on people's backs," he said.

According to Šlachta, the majority of Bratislava's office buildings are based on a cubical design. "There are only a few examples of open space solutions, which is a pity," Šlachta said. "Cubicles are less flexible and choosing a bad office module might cause unnecessary expenses for a company."

"People aren't 'locked in' between four walls, their workspace looks more spacious and they can move freely," he said.

Hermann added that projecting an interior of an administrative building means also designing a comfortable place to work in from the employee's view.

"I see a modern, quality administrative building as a mental work factory - and a factory makes good products when everything is functioning and everyone there feels good," Hermann told The Slovak Spectator. Hermann participated on projects like Panorama City, Tower 115, and Millennium Tower III.

The Panorama City project (also called the Bratislava Twins) is scheduled to open in 2009. Its developer, J&T Real Estate, is ready to pour Sk17 billion (€495 million) into the complex, which will make it the biggest real estate project in Central Europe to date.

Tower 115 (formerly the Press Centre) with its 115 metres will remain the tallest building in Slovakia until Panorama City is finished, topping Tower 115 by 15 metres.

Kusý said that the interior design of an office building depends mainly on the individual investor's requirements and their workflow method. The NBS requested a cubical solution simply because it suited the bank's work system the best, he said.

According to Kachlík, when a client has its own dress code and a strong corporate identity, it makes it much easier to design an interior but on the other hand the work usually ends up lacking in creativity.

As for colours, Kachlík said the trends prefer a neutral look of the office space.

"Pastel colours are trendy, and are sometimes used in a combination with a dominant," he said.

After almost a decade of preparation and work, Bratislava still lacks a master architectural plan, which basically allows investors to build what they want and where they want. To use their property most effectively, they often choose to build tall.

Hermann said that without a plan, some office buildings might end up deforming the face of Bratislava.

"Skyscrapers will stick out on the city's ground plan like weeds in a flower bed," he said. He added that badly placed buildings that are currently being built might cover up some of the city's best-known landmarks.

Šlachta offered Bratislava's Aupark shopping centre as an example of this architectural anarchy: "The Aupark building is killing the dominancy of the subtle pillar of the New Bridge and its restaurant on the top (generally known as 'the flying saucer' thanks to its shape)." He added that there is already a draft set of regulations for the city, but even without them, an architect should still know where a skyscraper should or should not be built.

As Bratislava's main architect, Šlachta often receives other complaints too, such as a recent one from the VÚB Bank, which complained that the mirror stripes on the surface of the building that has just been built next to its headquarters are reflecting sunlight through the bank's windows and disturbing employees

Hermann said that priorities need to be set as to what problems should be solved first. He said the city badly needs height zoning regulations as well as to determine which areas of the city would be most suitable for skyscrapers.