"There was total chaos" even before explosion, witness says

THE INVESTIGATION into the explosion at the VOP Nováky military facility is continuing in tight secrecy, but details are emerging of a laxity in bomb disposal practices that could have caused the blast. 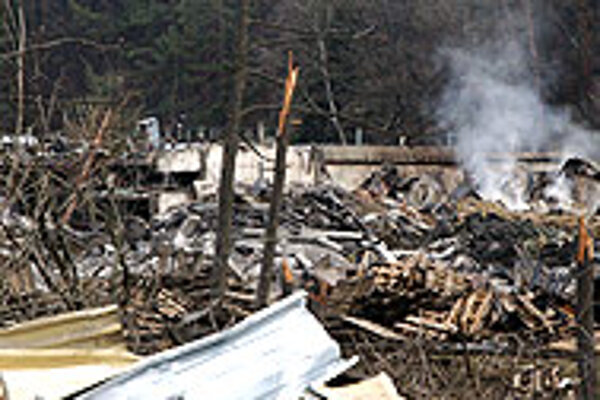 Font size:A-|A+
THE INVESTIGATION into the explosion at the VOP Nováky military facility is continuing in tight secrecy, but details are emerging of a laxity in bomb disposal practices that could have caused the blast.

A defence sector source that spoke to The Slovak Spectator on condition of anonymity said that "there was total chaos" at the depot even before the explosion due to poor management and the amount of work the bomb disposal unit had been engaged to do.

"It is absolutely clear from the size of the shock wave that there was more ammunition in the bomb disposal area than there was supposed to be," said the source, who inspected the area after the blast.

"The rules say that after each shift, the explosives that have been removed from the shells and mines must be removed, but they were being allowed to build up. We can tell that also from the fact that there were three flashpoints.

"It is also clear that there were people at that site that had no business being there."

Various media have reported that in an effort to satisfy client demands, the facility had engaged part-time workers with less experience and training.

According to the source, VOP Nováky performed bomb disposal work not only for the Slovak military but also for the Czech Republic, Hungary and the United States, among others. It also had private clients, such as the arms trader SMS Dubnica nad Váhom, which engaged it to do contract work.

"It had a good name abroad, a lot of credit," the source said.

Jozef Tuchyňa, the former chief of staff of the Slovak army, claimed that private companies had even started renting space from VOP Nováky within its ammo dump.

"It was a mistake to allow other companies to move into the premises, because that reduced the room available to VOP Nováky, and meant that ammunition piled up where it shouldn't have," he said.

"Last year, VOP Nováky was turned into a joint-stock company [owned 100-percent by the state]. The main aim of joint stock companies is to make a profit. But the business they get from the Slovak armed forces is so small that to keep the company going they have to import material from all over the place."

Defence Minister František Kašický said two days after the blast that he was "very angry" about what he had found when he arrived at VOP Nováky to take command of crisis operations, although he did not specify what shortcomings he had discovered.

However, he conceded that in April 2006 an inspection of VOP Nováky had found shortcomings, although again he was not able to say what action if any had been taken.

Jozef Vida, whose 21-year-old son was missing in the explosion and presumed dead, said he too believed that too much removed explosives had been allowed to build up in the bomb disposal hall.

"They had no storage facilities," said Vida, who worked for VOP Nováky for 23 years. "They used to, but recently they only had the bomb disposal line and the halls around. The management of the company allowed material to be stored on the premises. Some of it is extremely sensitive to static electricity, which is why there are rules on how much can be in one place at one time."

Tuchyňa said that responsibility for the "chaos" at VOP Nováky lay also with the ministry.

"The labour inspectorate has no access to VOP Nováky, but the Defense Ministry does. And what do we have a military intelligence service for if not to keep control of things and make sure such things don't happen? This is virtually a matter of state security!"