IN A MOVE that could be seen as daring, Tokyo Sushi-Bar doesn't have a sushi bar at all. What it does have is an extensive sushi menu, a large and diverse selection of Japanese dishes with a few Thai and Indonesian entries thrown in, an attentive English-speaking staff, reasonable prices and, in summer, a quiet, shaded courtyard in which to enjoy your meal. 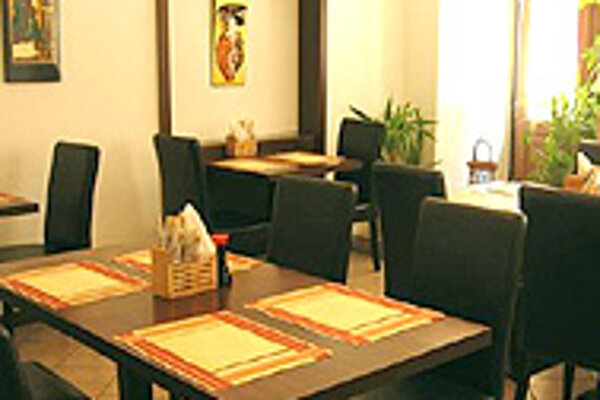 IN A MOVE that could be seen as daring, Tokyo Sushi-Bar doesn't have a sushi bar at all. What it does have is an extensive sushi menu, a large and diverse selection of Japanese dishes with a few Thai and Indonesian entries thrown in, an attentive English-speaking staff, reasonable prices and, in summer, a quiet, shaded courtyard in which to enjoy your meal.

Now let's begin with the sushi. Tokyo Sushi-Bar offers an impressive list, from sashimi - various types of fresh raw fish pieces laid across pressed sushi rice patties - to tekka maki - bits of raw tuna enclosed in sushi rice and wrapped in a thin sheet of nori, made from seaweed. Each sushi platter comes on a wooden board, with a dab of hot wasabi (horseradish paste) and a pile of tender, paper thin, pickled ginger. We chose the maki mix, small bits of avocado and cucumber rolled in sushi rice and wrapped in nori (6 pieces, Sk119). The vegetables were crisp and the rice firm; the nori tasted sweetly of ocean salt. Having been raised on the ocean and sternly cautioned against eating seafood out of its sight, we were too timid to try the fish in landlocked Slovakia, but it looked clean and fresh, and the large number of Japanese patrons enjoying it suggested it was both authentic and delicious.

The soups at Tokyo Sushi-Bar are spectacular. Tom Kha Gai, Thai chicken and coconut soup, is rich with coconut milk, tender chunks of chicken, and thin slices of red pepper, gently spiced with lemongrass and chili (you can add more chili if you want). The spicy and sour vegetable soup is the spiciest, sourest and most delicious soup of its kind I've ever drained to the last drop. A deceptively thin-appearing broth with a few slivers of bamboo and carrot, the flavor bursts with garlic, vinegar and black and red pepper (Sk69 for either).

Moving on to appetizers, we selected spring rolls Thai style (Sk109) and chicken wings with Thai sauce (Sk89). The spring rolls were two flaky fried rolls stuffed with lightly spiced sausage, scallion, and cabbage, served with a sweet, fruity dipping sauce. The only objection was that the rolls are large, and might make a better main dish than appetizer. The chicken wings were crunchy and sweet, smothered in a thick, coconut-chili sauce so addictive that when the wings were gone we found ourselves surreptitiously spooning the leftover sauce onto rice, vegetables and anything else at hand before the waiter could take it away.

Main dishes are numerous, with something for everyone, from fish to pasta, chicken and duck to beef and pork, vegetarian dishes, salads, and several rice combinations. We tried the beef and broccoli in sesame oil (Sk189), vegetable tempura (Sk149), yaki soba (Sk169), and chicken and cashew (Sk189). All were satisfying, though some more so than others.

The beef and broccoli, for example, featured perfectly cooked, tender but not mushy, broccoli in a sizzling, garlicky sauce. The beef, however, was tough, even rubbery. Chicken and cashew, in a similar light sauce, was a bit bland, but the chicken was tender and plentiful. Vegetable tempura was very good - a mixture of carrot, onion, mushroom, eggplant, and zucchini fried in a light batter and piled high in a basket - but perhaps a bit greasy, and the batter could have been crispier. Yaki soba was the best of the bunch, with nutty buckwheat noodles tossed with crisp cabbage and carrot strips and bits of scrambled egg in a complex, smoky sauce.

The ambience at Tokyo Sushi-Bar is quiet and unassuming. A small ante-room is for smokers; the larger room behind it is non-smoking. Japanese paintings adorn white walls. Tables are brown Formica, with black straight-backed cushioned chairs. The music is low and unobtrusive, and waiters are attentive and speak English. In summer, the shaded courtyard dining area, set back from the noise of the Old Town streets, is a particularly relaxing place to enjoy a leisurely meal.

Tokyo Sushi-Bar boasts a long list of wines, Japanese, local, and non-alcoholic beers, spirits, and, of course, saké, and there are a few desserts, too: fried bananas, coconut ice cream, sticky rice with mango and honey (Sk69 each). But we were stuffed long before our meal was finished, and had to defer dessert for another day.

Completely refreshed and satisfied, we rolled out the door and staggered toward the tram, vowing to return as soon as possible to try those bananas... and the chicken salad... and the coconut shrimp... and how about more of those chicken wings with the sauce?