SOME 150 supporters of Slovakia's Nazi-puppet Second World War state gathered to celebrate the 68th anniversary of its founding at the grave of its president, the priest Jozef Tiso, in Bratislava on March 14. 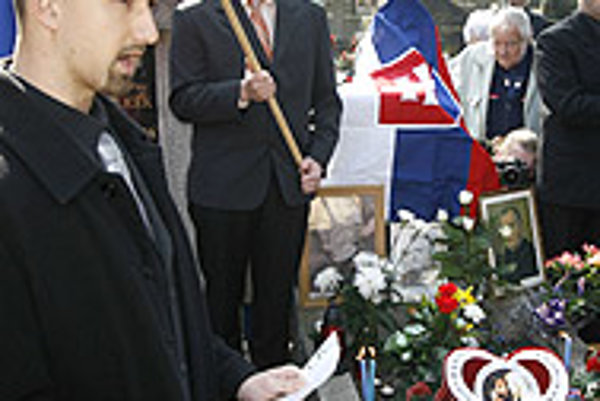 Font size:A-|A+
SOME 150 supporters of Slovakia's Nazi-puppet Second World War state gathered to celebrate the 68th anniversary of its founding at the grave of its president, the priest Jozef Tiso, in Bratislava on March 14. In a traditional display of far-right sympathies, the mostly young and shaven-headed men sang nationalist songs and listened to nationalist speeches, while a few threw Nazi salutes, all under the gaze of plainclothes policemen.

Young skinheads began arriving at the Martinský cemetery in Bratislava at around 11:00, and were frisked by uniformed policemen. Most wore black or camouflage gear with hoods over their heads.

Some stopped by the grave of Vojtech Tuka, the prime minister of the wartime state and a strong supporter of the Final Solution for Slovakia's Jews, to light candles in holders bearing the emblem of the far-right Slovenská Pospolitosť (Slovak Togetherness) civic organization.

Tiso's grave, on the other hand, was surrounded by retirees, Slovenská Pospolitosť members and teenaged skinheads. There they heard a speech from the new leader of Slovenská Pospolitosť, Ivan Sýkora, who called Tiso's execution after the war at the hands of the allies "the shameful murder of a national hero, whose name many dirty today".

Sýkora called on those of his listeners who has pro-Slovak feelings to unite, let the world know about them, and not to fear the consequences. "I'm either for the nation or against the nation," Sýkora said.

The assembly then heard a speech from Stanislav Pánis, the head of the Slovak National Unity (SNJ) party. Pánis called on his young listeners to "fight against those casting shame on our history and our nation". He also criticized the dozen journalists monitoring the gathering, calling them "uneducated" and saying they "write about things they absolutely don't understand," to applause from his listeners.

Asked what he thought about the wartime Slovak state, an elderly man standing at the back of the crowd said: "Slovakia at the time was an asylum for Jews from surrounding countries. It's not true that Tiso was against the Jews."

Historians have calculated that under Tiso, about 70,000 Slovak Jews were sent to concentration camps in two waves in 1942 and 1944.

Pánis called on the crowd several times to sing and pray together. He was supported by about 15 pensioners, but his younger listeners did not know the words to the prayers or the songs. They joined in only with the singing of the nationalist classic Hej, Slováci.

Among those present was MP Jozef Rydlo, a member of the Slovak National Party (SNS). "Why shouldn't I be here? It's not my shame, but the shame of those who don't know how to honour a memorial day for Slovakia," Rydlo said.

After Pánis dismissed the crowd at Tiso's grave, a few individuals lingered by the site. One of them, a tall shaven-headed man, began to throw Nazi salutes and shout at the journalists who remained. He appeared to be heavily under the influence of alcohol. He was eventually pacified by a member of Slovenská Pospolitosť. "You're spoiling the memorial," the pacifier whispered. The young man then moved off to Tuka's grave.

The ceremony was attended by dozens of young people in their early teens. The boys had shaved heads, the girls thick dark make-up. None wanted to speak with the media. Asked what they knew of the Slovak state, one answered: "What are you asking us for? Look it up in a book."