SOUTH KOREAN company Samsung Electronics LCD has signed an investment contract with the Slovak Republic that the government believes will pave the way for a total of 5,700 new jobs. 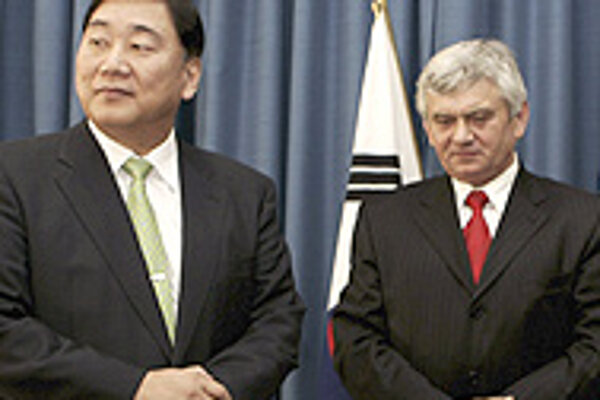 Font size:A-|A+0
SOUTH KOREAN company Samsung Electronics LCD has signed an investment contract with the Slovak Republic that the government believes will pave the way for a total of 5,700 new jobs.

On March 13, Prime Minister Robert Fico, Economy Minister Ľubomír Jahnátek and Sang Wan Lee, president of Samsung Electronics LCD, signed a contract through which Samsung will invest almost Sk12 billion (€320 million) into what will be its biggest plant in Europe, and Slovakia will provide the highest level of financial support European law allows.

"I'm confident the contract will be advantageous for both sides," Fico said after the signing.

Samsung will construct its new LCD screen factory near the village of Voderady just south of the western Slovak town of Trnava. When it reaches full production, it will be producing 10 million screens a year and seeing a roughly Sk80 billion a year turnover.

Work at the site has already started and production should begin as early as March 2008 with full capacity being reached in 2012, though Jahnátek said that it might be sooner.

"It is not out of the question for full production, which is scheduled for 2012, to being sooner," he said. "The company hopes to have two out of four production lines running by next year because its competitor LG Philips will start production in Poland this year."

This will be the third largest greenfield investment in the Slovak Republic to date, only topped by the investments made by the South Korean Kia Motors (€1 billion) and the French PSA (€700 million) auto manufacturers.

In addition to its promised financial investment, Samsung has also agreed that it will offer an average wage of Sk25,500 a month, which is quite competitive compared to the current average Slovak wage of almost Sk19,000.

However, the South Koreans are not the only ones who are putting out for the deal. The Slovak government has offered as much assistance as it is able to within the bounds set out by the EU, with their financial contribution coming to Sk2.7 billion.

"The firm will be given Sk2 million crowns for every job it creates and we will spend Sk170 million on qualification courses," said Jahnátek.

The state has also agreed to build a training centre which will operate in cooperation with experts from Samsung and four of Slovakia's technical schools.

The contract also stipulated that Slovakia will invest Sk1.6 billion into developing the infrastructure needed for the new factory.

On top of the 1,200 new openings promised by Samsung, the economy minister reported that around 4,500 new jobs should also be created through the arrival of seven of Samsung's suppliers, who should be coming to the region and building plants there as well.

Jahnátek said their names would not be made public until the contracts are signed, but according to a report given by the TASR newswire over a month ago, some possibilities include companies such as Hansol, Fine DNC, Samsung CHEIL, Samjin, and Shinwha.

The suppliers would probably build close to Samsung's new factory, but Jahnátek did not give a clear answer as to whether they would also receive financial incentives.