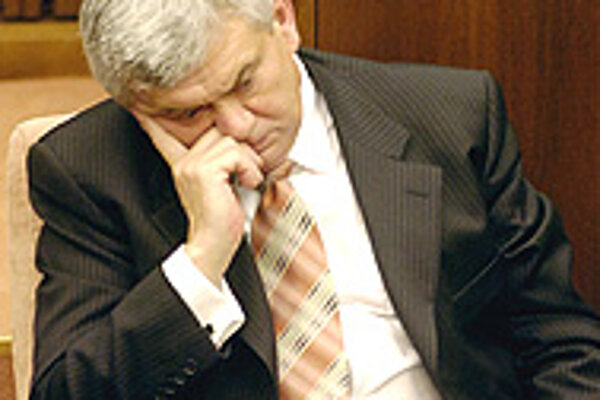 "How does a private company, which also has to obey the laws of this country... generate flows of dirty money to be used in non-traditional forms of doing business?" the minister asked reporter Gabriel Beer in the March 21 issue of Trend magazine. "These can be created only in legal ways. So why can't state firms do it as well?"

Jahnátek was advancing the view that the only way to revive Slovakia's arms industry was for the government to take control of key firms like DMD Holding and use "non-traditional" methods to battle for contracts.

"Because I am in business, I know very well how these money flows work. That's why I think that a state company could do it as well... As long as it was, quote, 'transparent', everything is alright... These are non-traditional forms of business, and we can't afford to close our eyes to them."

As Slovakia is a signatory to the OECD's anti-bribery convention, Jahnátek's statements were held to be in clear contrast to the country's international commitments.

"It is up to the countries that have signed and ratified the convention to respect its provisions," said OECD spokesman Nicholas Bray. "The OECD convention is against the bribery of foreign public officials in international business transactions. I don't think we need to go into what form the bribery takes. It's as straightforward as that."

Riccardo Mosca, a spokesman for the European Commission's commitee on justice, freedom and security issues, said he could not comment on the internal affairs of another country, but said that in general, "justifying behaviour that is illegal is not in the spirit of the European Union, that's logical. Good government is fundamental."

Jahnátek later denied having made the statements, saying he had his own tape of the interview in which he didn't use the expression "dirty money", and only spoke of corruption in a general sense as tactics that were employed in the private sector. However, he refused to release his recording to the media.

"I have been very clear on this. I never said 'dirty money', I only spoke of payments," Jahnátek said.

Trend editor Rado Baťo said he stood by the interview transcript, while the magazine published the interview recording on its web site (www.etrend.sk).

Reactions from the ruling coalition were muted, but critical nevertheless. While Prime Minister Robert Fico did not respond to media questions, Interior Minister Robert Kaliňák told the Sme daily that, "I think these statements are rather unfortunate, but the minister explained to me that he had been speaking of fees that are legal.

"His mouth got away from him, but I think it is clear he was speaking of legal transactions."

HZDS deputy chairman Viliam Veteška told the daily that the matter should be taken up by the coalition council, a senior government body. "I don't like it that the minister chose this way to present Slovakia's trade as a member country of the OECD and EU," he said. "This gives you a picture of the minister."

Meanwhile, the political opposition called on Jahnátek to resign at a joint press conference on March 22.

As news of Jahnátek's statements spread beyond Slovakia's borders, international transparency and arms control groups responded with shock and dismay.

"It's a great shame to see a minister making such statements," said Mark Pyman, defence project leader with Transparency International UK. "The more there is a public reaction in the country and from his government showing the unacceptability of that comment, the better.

"If it led to requests for his resignation, that would be positive as well."

"It's shocking that the minister would endorse bribery as a way to promote arms sales," agreed Lisa Misol, a senior researcher with Human Rights Watch (HRW) in New York.

"Surely he knows that paying out 'dirty money' to secure contracts, whether for weapons or other products, is illegal and contravenes international anti-bribery conventions."

Like Transparency International, HRW is an international non-governmental organization that also supervises the arms trade. Misol is the author of Ripe for Reform: Stemming Slovakia's Arms Trade with Human Rights Abusers.

"If his goal was to improve Slovakia's exports, he may have done the exact opposite," Misol continued. "Such comments are likely to damage Slovakia's reputation overseas in ways that can undermine companies' access to global markets."

Pyman added that Jahnátek's comments betrayed an approach to the arms trade that was out of step with current practices.

"There's a big move amongst arms companies now and their supporting governments to respect the OECD Convention on Bribery of Foreign Officials, and therefore to reduce corruption in defence procurement. So if your minister is proposing the opposite, then he is going in the opposite direction from international opinion."

The Jahnátek interview was published during the same week that PM Fico visited Israel on an official trip with five entrepreneurs, four of whom were from Slovak arms dealers.

On March 20, David Hercky from the Slovak-Israeli Chamber of Commerce in Jerusalem announced that the Israeli Rabintex firm had signed a Sk238 million deal to sell army helmets to the Slovak Defence Ministry through the Willing firm, a Slovak company with close ties to the Fico government.

The executive director of Willing, Ivan Šubrt, was nominated by Fico's ruling Smer party to the state heating company in Martin late last year, while board member Miroslav Výboh is on a first-name basis with both Fico and Kaliňák.

Výboh also accompanied Fico on his February visit to Libya, along with an official from the LOT Trenčín state military refitter, which secured a promise to repair 20 of Libya's L39 Albatross fighters.

In the Trend interview, Jahnátek confirmed that the Fico government was trying to resuscitate Slovakia's moribund arms industry, which before the collapse of communism had employed 80,000 people and accounted for 60 percent of military production in the former Czechoslovakia. In 1988, for example, the output of the Slovak sector was 19.3 billion Czechoslovak crowns; in 2005, it exported military goods worth only Sk1.85 billion.

"The ambition of this government is to put the defence industry back on its feet," Jahnátek said.

Defence industry analyst Ivo Samson said he was not surprised that the sector had become a priority for the Fico government, which contains the nationalist SNS party as well as the populist HZDS of Vladimír Mečiar, a booster of the arms industry when he was prime minister in the 1990s.

"One would expect it of a nationalist-socialist government that it would support the former pride of Slovak industry, which was the arms sector," Samson said.