SLOVAK BANK clients are getting just as internet savvy as their western neighbours. Tatra Banka, Slovakia's oldest bank, reported that 75 percent of its transactions are now being done online, while internet service clients pay four times less for a transaction than high street bank clients (Sk3 instead of Sk12). Online transactions are cheaper at most Slovak banks. 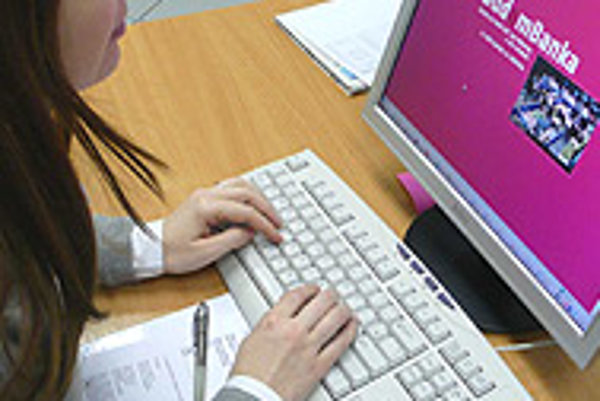 Font size:A-|A+
SLOVAK BANK clients are getting just as internet savvy as their western neighbours. Tatra Banka, Slovakia's oldest bank, reported that 75 percent of its transactions are now being done online, while internet service clients pay four times less for a transaction than high street bank clients (Sk3 instead of Sk12). Online transactions are cheaper at most Slovak banks.

Internet banking in Slovakia comes in two flavours - as a service provided by a normal high street bank in addition to its regular services, or as a bank that operates solely online, a virtual bank. A virtual bank doesn't have a typical chain of branches in different towns and might have only one main office. A virtual bank's clients access their accounts on the internet, by telephone, PDA and mobile.

There is currently no virtual bank serving the Slovak Republic. However, the online bank mBank will start operations here by the end of 2007.

The mBank was started in Poland in 2000 as a subsidiary of one of Poland's largest banks, BRE bank. More than 1.3 million people have opened bank accounts with mBank since its launch and its number of clients is still increasing, with 25,000 new people joining monthly.

mBank's spokeswoman Magdalena Ossowska told The Slovak Spectator that mBank's online service will also be launched in the Czech Republic. The bank will release detailed information about the project and its offers in June.

There are already 24 banks in Slovakia, with a preliminary taxed profit for 2006 of Sk15.9 billion (€466 million) so mBank will have no lack of competition.

"Any new internet bank arriving in the bank sector will have to bring innovation and new ideas to survive in the highly competitive Slovak market," said Juraj Barta, the Market Research Analyst from Slovenská Sporiteľňa.

Internet banks don't have the overheads involved in running branches and paying hundreds of employees. They can thus afford charging lower or no fees and offer higher interest rates. mBank, for example, offers an interest rate of 0.5 percent on their standard account. The current interest rates of Slovak banks are around only 0.1 percent.

However, according to Barta, the advantages of having lower operating costs can be a double-edged sword.

"An internet bank is virtual and it can't be touched. There are no cashiers on hand to assist people so it's harder for such a bank to gain their trust," said Barta.

Although Slovaks are not naturally predisposed to using a virtual bank, Barta said the situation is now much better than ever as average clients have become more familiar with the internet over the last couple of years.

"Today's bank clients have more trust in modern technology and have come to value the comfort of banking from home and the time saved," he added.

According to Eva Horvátová of the Department of Banking at Bratislava's University of Economics, online banking has some good prospects and she expects the number of bank transactions made online to double by 2008.

One reason for this is the online banks' pro-client behaviour, said Horvátová. They are trying to unify services directed at the masses and offer them over the internet without the client having to visit their local branch. At the same time, they offer an individual approach to their top clients, trying to offer them tailored bank products.

Paradoxically, Horvátová said, companies that are joining the market later are using technologies that are more developed and more secure and more efficient than those that were provided by the market's original players.

One such example was Slovakia's first virtual bank, Eliot, which was launched in 2000 and closed in 2004.

Eliot, a project undertaken by Tatra Banka, was launched at a time when only 10 percent of Slovak homes had an internet connection. After four years it had only managed to gain 20,000 users. The virtual bank offered Sk1,000 (€30) to its first 10,000 customers. Eliot didn't provide an interest rate, but provided all its services free of charge.

Rainer Franz, chairman of Tatra Banka, told the Trend weekly in 2004 that it was necessary to launch Eliot in order to avoid an influx of foreign internet banks to Slovakia. He said Tatra Banka would have been badly affected if some online banking providers had entered the bank sector at that time.

"Eliot was also a matter of prestige - it will always remain Slovakia's first internet bank," she said.

Eliot started charging for its services in 2003 and closed a year later.

Tatra Banka said it closed Eliot after the virtual bank had accomplished its goal of making internet banking more accessible for a wide range of people.

"We didn't see a reason to run Eliot together with Tatra Banka's internet banking service, which offered the same and sometimes even better services than Eliot," said Tatra Banka spokeswoman Terézia Copláková.

However, Ivana Brezinská, an Eliot customer, was disappointed when the bank announced its closure.

"I was angry because Tatra Banka offered me a [replacement] product that was nothing like what I was used to with Eliot," she said.

Tatra Banka offered Eliot users the TatraDynamic service. The use of the service was free of charge for the first three months.

Brezinská said she is satisfied with her current bank, but she may consider opening an account with mBank if its offers prove to be appealing.

Nonetheless, mBank will face tough competition from banks that have already added internet banking to their portfolio. According to Barta, Slovakia now has a developed internet banking market, even compared to many other countries. He added that e-banking is on the increase. Currently, 10 percent of Slovak bank clients use e-banking, which is five times more than in 2003.