Government under fire for political nominations

Slovak Prime Minister Robert Fico's government has again come under fire for installing its own nominees to important positions in public administration and state-owned companies - in spite of the fact that before the last elections, Fico promised these positions would be given to independent experts. 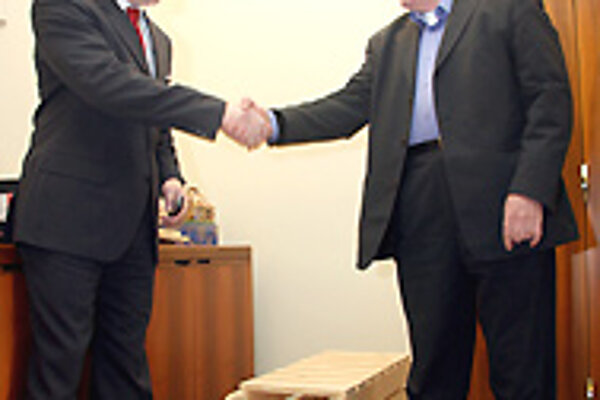 Font size:A-|A+
Slovak Prime Minister Robert Fico's government has again come under fire for installing its own nominees to important positions in public administration and state-owned companies - in spite of the fact that before the last elections, Fico promised these positions would be given to independent experts.

In March, Slovak media reported that Michal Mečiar - the son of Vladimír Mečiar, the controversial Slovak politician and chairman of the HZDS party - had started working at the Foreign Ministry.

Ján Kubiš, Minister of Foreign Affairs, admitted they plan for Mečiar to join the diplomatic service.

"I met Mr. Mečiar some time ago, he quite impressed me, but nothing happened then," Kubiš told the Pravda daily on March 8. "Later we reinforced the office so I fell back on these reserves."

Fico admitted on February 28 that political nominations are necessary for the Slovak diplomatic corps.

"I do not intend to say that political nominations are not right," he said. "You know, there are some positions and some countries where the government wants to have a reliable person... So if an important position is concerned, where we want to have a clear relationship and contact with the ambassador, we will not be against it."

The vice-chairman of the HZDS, Milan Urbáni, sees no problem in Michal Mečiar working at the ministry.

"He is an educated man, so why would he be discriminated against when looking for a job just because his father is a politician?" Urbáni said.

Former deputy foreign minister József Berényi of the Hungarian Coalition Party told the Pravda daily that a minister can call a political nominee to his cabinet.

"However, he should be professionally qualified and have experience with foreign policy," he added.

But he said it would be unacceptable to send Mečiar into the foreign service. For one thing, he is related to the chairman of a ruling party.

Also, he would not live in Slovakia in the long term, but in the US instead, Berényi said. According to the law, a public employee has to be a Slovak citizen or a citizen of a European Union member state living in Slovakia.

Kubiš avoided answering the question of whether Mečiar fulfills these conditions. He just said, "All these things are being dealt with."

Then on March 29, the Sme daily wrote that the son of a famous controversial businessman and president of the Slovak Ice-hockey Association - Juraj Široký, who is reputed to be one of Smer's most influential donors - has been the advisor of the financial director of Transpetrol, Ivan Krivosudský, since last September.

Transpetrol is a company where state has a majority stake.

Krivosudský says that Široký Jr. was chosen by a recruitment process.

"I had about five tips. And finally I chose this person. I am satisfied with him," he said.

The ruling coalition, led by Smer, replaced Transpetrol's board of directors and supervisory board after the last elections. Economy Minister Ľubomír Jahnátek officially proposed the members of the Transpetrol boards. He knows businessman Široký from his work with the joint-stock company Plastika.

The new vice-president of the board of directors was Vladimír Balaník, one of Široký's closest colleagues. However, he resigned after two weeks because of media pressure.

Fico spokesperson Silvia Glendová declined to answer a question from the Sme daily about what the prime minister thought about Juraj Široký Jr.'s position with Transpetrol.

"The government has already become used to the fact that the daily press, especially the dailies Sme and Pravda, operate like newspapers of the SDKÚ-party," she said. "The case you are talking about is ridiculous and it just confirms that anything goes when it comes to criticizing the Slovak government, and above all the Smer party."

In the 1990s, Široký helped found the Czech Harvard privatisation fund, which is the subject of a continuing police investigation into asset stripping.

Last autumn, the original copy of Široký's file disappeared from the Nation's Memory Institute. The copies that have been preserved imply - according to the ÚPN employees - that when Široký worked for six years at the Czechoslovak embassy in the US, he also worked for the counter-intelligence of the communist state security, the ŠtB. The copies of the file are not legally valid, however.