To fly or not to fly?

A TRAIN ride from Bratislava to Košice takes around six hours. But if you choose to fly, you can make it there in one-sixth of the time. 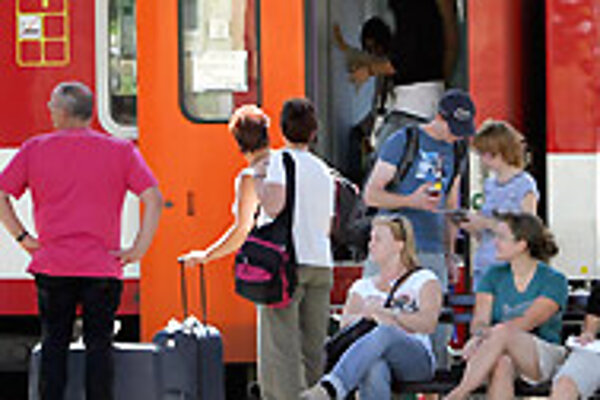 Font size:A-|A+
A TRAIN ride from Bratislava to Košice takes around six hours. But if you choose to fly, you can make it there in one-sixth of the time.

While both airlines and railways say there has been no real war raging between them, there are still some interesting developments taking place in both markets from the customer's point of view, with the result being cheaper fares for one group in particular - students.

SkyEurope lowered the price of its domestic flights between Bratislava and Košice last year to less than Sk500 including taxes. That's even cheaper than a standard train ticket, which cost almost Sk600.

However, Železničná Spoločnosť, the Slovak rail operator, came up with a new business policy this March that is much friendlier to students' wallets. This means students can now take a train from Bratislava to Košice for as little as Sk260.

The SkyEurope discount was arranged in cooperation with the Student Agency travel agency as part of a new campaign targeting students. After five years on the Slovak market, SkyEurope started promoting its domestic flights as an alternative to railways. The airline doesn't just encourage people to fly; it specifically tells them, "Don't rush to catch a train, just fly on a plane" (Neleť na vlak, leť lietadlom).

Katarína Kubašovská, a student at the University of Economics in Bratislava, took advantage of SkyEurope's offer and has already flown four times from Bratislava to Košice, her hometown.

"Of course flying is easier and if it doesn't cost too much, I always prefer it to trains," she said. "Students only fly to Košice from time to time, and it mostly depends on the price of the ticket."

SkyEurope made it simple for students to buy tickets through Student Agency even two days before the trip. However, Kubašovská said that once the special student sale is over, even those students who got used to flying will return to trains. In this case, money really matters a lot, she said.

SkyEurope is aware of the need to appeal to students and other customers on a limited budget, said Gabriela Horváthová, the spokesperson for SkyEurope.

"We are trying to compete with land transportation," she said, hinting that there is still competition between land and air carriers. "We want to democratize flying and make it available to everyone. Besides, and above all, flying is statistically and in reality the safest way to travel."

But rail companies are also trying to keep prices down. As of March, all students under 26 will only pay half price on any domestic rail ticket using their ISIC card, an international student ID card recognized worldwide and issued by most Slovak universities. Before, students could only travel for half price while commuting between home and school.

"These changes weren't made in response to SkyEurope," Pavol Gallo, director of the railway company's business department, told The Slovak Spectator. "We made the changes in response to the social policies of the present government, which is trying to harmonize land transportation tariff policies."

SkyEurope, a private airline, celebrated the fifth anniversary of its first flight on February 13. The first flight went from Bratislava to Košice and is still the only domestic route in Slovakia.

"Košice, as the second biggest city of Slovakia, is a good place for many international companies to have their headquarters," Horváthová said. "Many people travel there on business."

Only a few of Ryanair's 454 routes are domestic and are limited to Ireland, Great Britain and Italy, so he doesn't expect that Ryanair will start offering domestic flights in Slovakia.

Kulakowski said he believes a route between the west and east of Slovakia could be profitable for the company, since the distance is more than 500 kilometres, but he thinks Ryanair's 189-passenger Boeing 737-800 would not get fully booked and they would have to look for a smaller plane.

With only one low-cost airline providing domestic flights, do railways really need to fear competition from above?

"In the short run, the low-cost flights could be put down as competition for the long-distance railway lines," Gallo said. "However, in the long run, after the modernization of the railway corridors, SkyEurope's policies will not work any more. This country is too small for that."

Price will always be on the side of land transportation, he added.

"It's all about advertising," he said. "While only a certain number of plane tickets are sold for a low price, our company guarantees an acceptable price no matter when the ticket was bought."