A whip and a splash: men and women's views on Easter Monday

SINCE TIME IMMEMORIAL, Easter Monday in Slovakia has been associated with a tradition that many abroad find incredible. 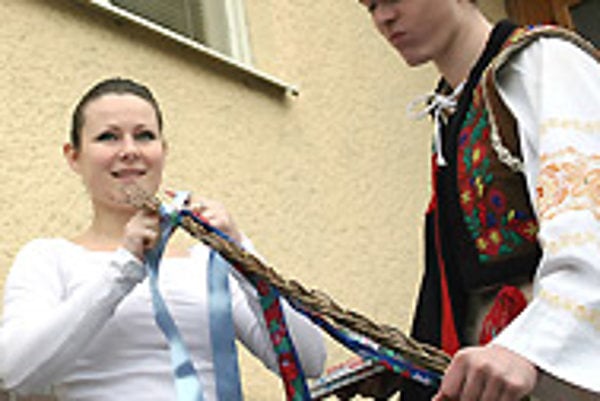 A girl in Banská Bystrica smiles while tying a ribbon onto a young man's korbáč. (Source: ČTK)
Font size:A-|A+3

The tradition involves groups of men going door-to-door to "whip" their female relatives and neighbors with a stick of intertwined willow branches called a korbáč and splash them with water or perfume. The soaking and whipping are variously said to ensure the woman's beauty, health, or fertility for the coming year.

The tradition is probably rooted in Lupercalia, one of the most ancient Roman festivals, which honored Lupercus, the god of fertility.

For their troubles, the women are then expected to reward the men with painted eggs, chocolate, pieces of cake or shots of spirits, such as slivovica or borovička. Recently, some boys have started demanding money.

But what do people really think about this tradition? The Slovak Spectator asked a group of men and women to comment on Easter Monday, and whether their town continues to celebrate the tradition.

Mária, a sales manager from Bardejov: These days, I think the tradition's become more of a game for children and teenagers, so I'm not very affected by it anymore. But I remember when I was around 10 or 12 years old that my classmates would come to my house and put me in the shower. I didn't like it very much. The biggest problem today is that, instead of chocolate eggs or bunnies, a lot of boys ask for money from the girls, and I think that ruins the spirit of the tradition.

Igor, a programmer/analyst from Trenčín: Easter Monday makes me think of fathers with young sons walking around with ribbons tied to their korbáč and plastic bags full of chocolate eggs and Easter bunnies. Personally, I spray my mother, godmother, and grandmother with some perfume as a symbolic following of the tradition, but I stopped really soaking people with water a few years ago after I accidentally sprayed my mother in the eye.

Olga, an asset manager from Prešov: In the eastern part of the country, we follow just the tradition of splashing women with water, not the tapping with the korbáč. But my family has always celebrated it only among each other, so I've always thought of it as fun, like a game. The only thing I don't like is that my father and brothers start splashing me at six in the morning! But I always warn them, the wetter they make me on Monday, the wetter I'll make them the next day.

Michaela, a retail banker from Liptovský Mikuláš: It's not just that I don't like this tradition, I hate it. It's embarrassing. I've always disliked it. My father always splashes me while I'm still asleep in the morning, but at least he's gentle about it. But the other men don't care how much you protest, so I usually go to the mountains, or somewhere else out of town, that day.

Vojtech, a systems analyst from Banská Bystrica: I followed the tradition when I was a child because I had to. A child does what he's told. But I stopped doing it myself about 15 years ago because I felt it was unnatural. I don't splash my wife, or even tap her with the korbáč, and I'm not sure whether I will pass it on to my children.

Radoslav, a developer from Žiar nad Hronom: I always splash my twenty-year-old sister with a big amount of water while she's sleeping. Of course, she calls me stupid for it and complains about having to change her clothes and bedding, but it's all in fun. And I think older women, who are used to the tradition, genuinely like it.

Peter, an applications specialist from eastern Slovakia: I remember my friends and I went around collecting money from the women in our families, and I always ended up with the least, so I was always jealous of them. Nowadays, I celebrate it with my son, but with the emphasis on family time. I think it is better for women in cities than in small villages in which they're soaked by being thrown into the river. Of course, the women there say they don't want it, but no one stops because they don't want to be the one who broke with tradition.