DELEGATES AT the Hungarian Coalition Party (SMK)'s March 31 congress surprised observers by electing vice-chairman Pál Csáky as the party's new leader.
Béla Bugár, who had been chairman of the SMK since its founding in 1998, was thus demoted to a rank-and-filer. 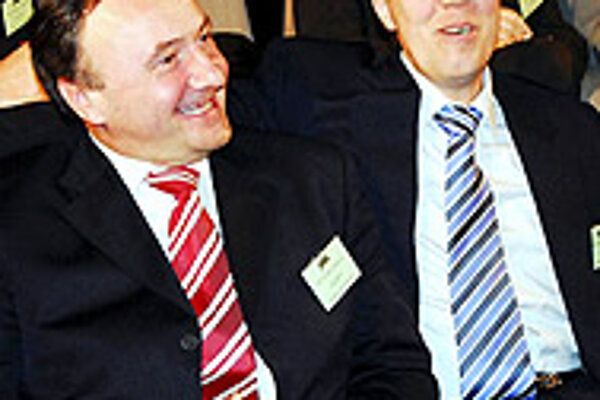 Béla Bugár, who had been chairman of the SMK since its founding in 1998, was thus demoted to a rank-and-filer.

Hardly anyone expected this result.

"The extent of dissatisfaction in the party was probably higher than was apparent," Grigorij Mesežnikov, the president of the Institute for Public Affairs, told The Slovak Spectator. "And Csáky succeeded in using this dissatisfaction several days before the election with his impressive start and work with the congress' delegates."

Even before he was elected chairman, Csáky earned criticism for his attacks on Bugár, alluding to ties between the long-time party chair and Oszkár Világi, a prominent businessman of Hungarian ethnicity.

Csáky told the Plus Jeden Deň daily on March 27, shortly before the congress: "A Hungarian lady journalist asked me if I didn't find it interesting that Bugár was preferred and nominated as a candidate in districts where there are influential people linked to Mr. Világi..."

Világi had been called the "éminence grise" (an influential but unseen presence) of the SMK during Bugár's leadership. Világi is currently the director of the Slovak oil giant Slovnaft, the majority owner of which is the Hungarian MOL group.

Bugár distanced himself from these words after Csáky was elected. On April 2, he told the Pravda daily: "Of course, this is a lie. The congress has resulted in a certain satisfaction for me, because the person who defamed the SMK in this way now has to purge the party. I am curious to see whether Csáky will succeed."

Csáky also drew heavy criticism from the media and political opponents, as well as political partners, when he was supported by Miklós Duray, who is seen as a controversial figure by Slovak politicians. After Csáky was elected, Duray was named the party's vice-chairman for strategy.

Duray's election was immediately seen as a sign that the SMK has started to become more radical in its stance on the ethnic issue.

"I do not think that the SMK is changing its internal nature," he said. "I would say it will stay a moderate party, except that some of the issues that have so far been discussed less officially by individual party members can become part of the official agenda of the SMK."

Mesežnikov said that especially means the question of territorial autonomy - an issue Duray has raised several times and which provokes big emotions on the Slovak political scene.

According to Kusý, Duray provokes the public by raising the issue of territorial autonomy from time to time, but until now he has never included this issue in the realm of a realistic political program.

"Moreover, I think the issue of autonomy is perfectly legitimate," Kusý said. "The point is to create positive relations between the dominant nation, or the government, and the minority, so that this question is not relevant; because it is always relevant when the situation becomes radically worse and more harmful for the minority."

Kusý went on to say the SMK is already becoming more radical, and not because it changed its chairman. The main reason for its radicalization is the fact that it has changed from being a ruling coalition party to an opposition party, and the task of the opposition is to slash at the government.

"Even Béla Bugár could not avoid the radicalisation of the party," Kusý said.

Kusý and Mesežnikov agreed that nationalism in the SMK will not escalate because of its new leadership; however, the ethnic element has already been intensifying on the Slovak political scene since the nationalist Slovak National Party (SNS) joined the governing coalition.

"The SNS joining the government has strengthened the position of people in the SMK who take more radical, or more firm, positions," Mesežnikov said. "Unfortunately, this ethnic element is growing stronger not just in the SMK, but also in Slovak parties."

SNS chairman Ján Slota told the private TV channel Markíza on April 1: "Csáky, if I might speak openly and clearly, in my opinion, is dirt."

This statement seemed scandalous for observers of the Slovak political scene.

"Recently, the SNS tried to eliminate the SMK," Mesežnikov said. "And these words are beyond human decency. They are absolutely inappropriate, wrong, humanly unacceptable."

Kusý sees it in a similar way

"What Slota said about Csáky is a statement that is not suitable even for the cheapest pub," he said.

There were also strong reactions to Csáky's election from the opposite end of the political spectrum.

Vladimír Palko, who is running to become chairman of the right-wing Christian Democratic Movement (KDH), told the Aktuálne.sk news server on April 3: "Let me remind you first what the new chairman of the SMK did. The first thing is that he played the anti-Slovak card, which has not been the custom."

Palko immediately proposed that the other opposition parties, KDH and SDKÚ, not meet the SMK for several months.

"Palko wants to isolate the party because its leaders expressed their opinions," he said. "Such an attitude is absolutely off-the-wall. It divides the opposition. Even until now, there have been enough problems in the opposition. And just when a common oppositional identity was starting to shape up, Palko has frozen it."