TWO WARTIME freight cars set out on a tour around Slovakia on the 65th anniversary of the deportation of Slovak Jews to Nazi concentration camps. 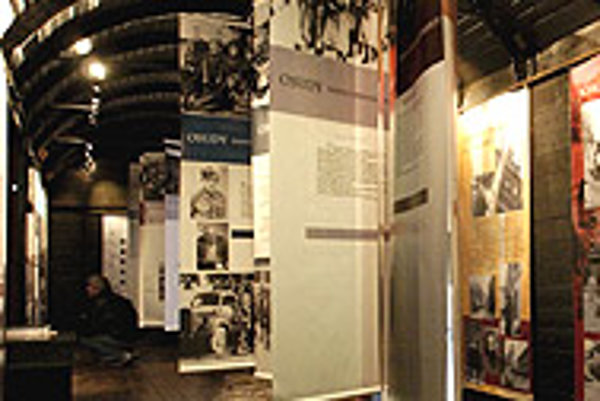 Font size:A-|A+
TWO WARTIME freight cars set out on a tour around Slovakia on the 65th anniversary of the deportation of Slovak Jews to Nazi concentration camps.

The first car, or wagon, holds an exhibition that tells the story of the deportations and the second car has been prepared as an exact copy of the wagons that were used in the deportations. It duplicates the conditions the deportees had to live in.

The wagons started their tour in the northern Slovak town of Poprad on March 25, exactly 65 years after a train loaded with 1,000 Slovak young Jewish women set off for Auschwitz. One of the women did not survive the journey's cruel conditions. After the Second World War, only 20 returned from the concentration camp. The rest perished in gas chambers, or were burned or buried alive.

The train from Poprad was the first deportation of Slovak Jews to concentration camps. By the end of October of that year, 1942, a total of 58,000 Jews had been deported from Slovakia.

The exhibition in the first wagon showcases the history of anti-Semitism from 1938 and its culmination in two waves of deportations. Information on the Roma holocaust in Slovakia is also on display. The history is told by telling the stories of individual people. Posters hanging in the middle of the wagon document the fates of 20 people who suffered racial persecution between 1938 and 1945.

The second wagon is an exact copy of the wagons that were used for deportations. They were also called dobytčiaky (cattle cars) as they were originally used to transport livestock.

The wagon is empty expect for two buckets. One held water and the second served as a chamber pot. The floor is divided into chalk squares covering around half a square metre. This was the amount of space the Nazis allocated for each person. This wagon also has a television playing a documentary in which people who survived the transports, which sometimes took two days, and the concentration camps talk about their experiences.

When the doors of the second wagon are closed, visitors can get a taste of the conditions that the deportees had to go through.

"I have already visited several Holocaust memorials, but I have to say that the way this one brings back these awful events is very sensitive," said Prime Minister Robert Fico at the project's ceremonial opening. "I have the feeling that the Slovak public knows less and less about what happened in concentration camps. It is good to commemorate September 9 (the memorial of victims of the Holocaust and racial violence), but it is also good to remember the first transport of women from Poprad and other events linked with the Holocaust," Fico told the TASR news wire after he saw the exhibition.

During the Second World War, about 70,000 Slovak Jews out of a total of 90,000 were deported from Slovakia. Only a fraction of them survived and returned after the war.

Over the next six months, the wagons will make a tour of 30 Slovak towns. The train will stop in Košice between May 14 and 18, and in Bratislava between July 9 and 13. The tour will symbolically end on October 25 in Čadca at the Skalité - Zwardoň border crossing to Poland. This is where the Jewish transports left Slovak territory.

For a Wagon Project timetable, prepared in cooperation by the Museum of the Slovak National Uprising in Banská Bystrica, the Documentary Centre of Holocaust in Bratislava and the ŽSR railway company, go to www.muzeumsnp.sk.