SHLOMO BREZNITZ was born in Bratislava in 1936. He survived the Holocaust thanks to the Order of Saint Vincent. Soon after the Second World War, he was exiled to Israel. He became a renowned expert on stress. 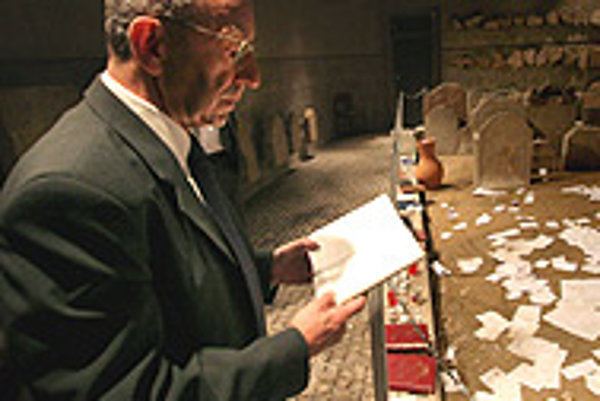 Font size:A-|A+
SHLOMO BREZNITZ was born in Bratislava in 1936. He survived the Holocaust thanks to the Order of Saint Vincent. Soon after the Second World War, he was exiled to Israel. He became a renowned expert on stress. Smiling, he says that the best laboratory in the world for examining stress is Israel, as it experiences terrorist attacks. He published his memoirs, called Memory Fields, in English and Slovak.

There is another interesting fact about Breznitz: he recently became the first Slovak member of the Israeli parliament, the Knesset. This move was spurred by his good friend, Israeli Prime Minister Ehud Olmert, who convinced him to join politics.

Breznitz visited Bratislava a short time ago. He took part in the Wagon Project in Poprad to commemorate the anniversary of the first deportation of Slovak Jews, which happened on March 25, 1942.

The Holocaust had a profound effect on Breznitz and his generation, he told The Slovak Spectator.

"My generation lives on borrowed time," he said. "We were not supposed to be alive. And only because we were extremely lucky, we are here."

Breznitz said the Wagon Project in Poprad impressed him very much.

"The other thing that I found dramatic at the Poprad railway station was that while we were listening to the prayers, there were trains coming in and out and they were being announced. Like, 'There is a train coming to platform two from this and this place.' The prayer was totally drowned out. I think it was very powerful. The wagon full of history was in the middle of real life".

During the Holocaust, Breznitz's whole family was taken to a concentration camp, except for his father, mother and sister.

"Everybody was taken to Auschwitz in 1942. And we never heard about them again. Not a single person," he said. "It included my grandparents, all my cousins.

"We were also taken, by the way. We were taken from the village of Vrbové, where we were hiding, and put in a transit camp in Žilina, from which the trains were going to Auschwitz. We stayed there for one month. My father was not with us. He was the chief engineer of the electric company in Slovakia. After one month, he got some special letter to protect us. So he took us out from transit camp and we stayed in Žilina until 1944.

"After the uprising against the Germans, my father got a message that the following night they will take us again. He had few hours to find a hiding place for my sister and me. He tried several places. A charity orphanage, Saint Vincent, took us. After the war, my mother came back from Auschwitz. And we were waiting for my father, but he never came back. I think if my mother was still alive, she would be still waiting, but she died more than 30 years ago from disease.

"When I was 12 in 1949, I wanted to leave to go to Israel and my mother and sister would not hear of it. They did not want to go. So I went on a hunger strike to convince my mother. After a few days, she let me go. And I left alone. But when I left, she changed her mind. And they both arrived just before the Iron Curtain closed. So we were lucky again."

Breznitz chose his words very carefully when asked for his opinion of the quote from archbishop Ján Sokol, that during the Slovak State in the Second World War, when 70,000 Slovak Jews were deported to concentration camps, there was prosperity in Slovakia.

"This is about democracy. Different opinions have to be tolerated," he told The Slovak Spectator.

Breznitz said the relationship between Israel and Slovakia is excellent. He added that it's important for Israel to be on such good terms with Slovakia.

"Slovakia is a member of the UN Security Council," he said. "Problems which relate to Israel come often before the Security Council, unfortunately. Therefore it is very important to have good friends there."

Breznitz said he was pleased with the country he found on his recent return to Slovakia.

"This is not my first visit to Slovakia," he said. "The first time I came to Slovakia was in 1991. But it was a very different experience. Everything was very, very dark and miserable, not like today."