AS A POLITICAL crisis in Ukraine triggered by President Victor Yuschenko's decision to disband parliament and hold early elections entered its second week, foreign diplomats and well-wishers travelled to Kiev offering to help broker a solution. Slovakia, despite having declared Ukraine its foreign policy priority in 2004, was not represented, nor did it issue any official statements on the unrest. 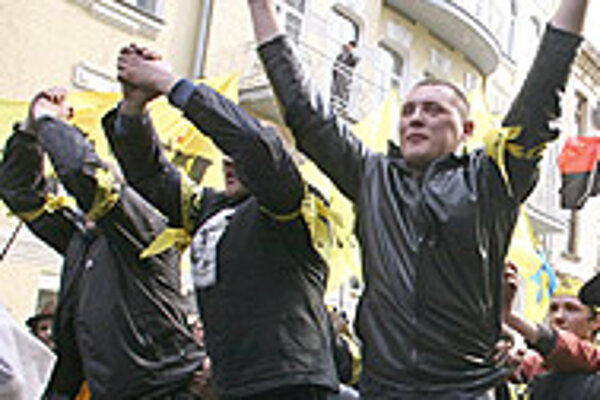 Font size:A-|A+  Comments disabled
AS A POLITICAL crisis in Ukraine triggered by President Victor Yuschenko's decision to disband parliament and hold early elections entered its second week, foreign diplomats and well-wishers travelled to Kiev offering to help broker a solution. Slovakia, despite having declared Ukraine its foreign policy priority in 2004, was not represented, nor did it issue any official statements on the unrest.

Ukrainian Prime Minister Viktor Yanukovych, whom Yuschenko accuses of trying to oust him, met on April 12 with Lithuanian Prime Minister Gediminas Kirkilas and reassured him that the crisis would not affect Ukraine's foreign or economic policy. The country is a major transit route for natural gas to European markets.

A group of European Parliament members was also in Ukraine on a mediation mission, with EP deputy speaker Marek Siwiec urging European lawmakers to pay more attention to what he described as "a power struggle".

Yuschenko and Yanukovych are old foes from Ukraine's 'Orange Revolution' in 2004, when Yuschenko won a repeat presidential vote after Yanukovych's victory in the first round was found to have been accompanied by massive election fraud.

Following the defection last month of some MPs in the Ukraine parliament to Yanukovych's ruling coalition, Yuschenko accused the government of trying to gain enough support to impeach him, and shut the legislature down. The parliament has continued to meet, however, while Yuschenko insists new elections will be held on May 27.

Siwiec said the European Parliament and the European Union should "change their attitude to what is happening in Ukraine, since if we allow the crisis to escalate it could threaten European interests and Ukraine's European ambitions."

Even former Polish President Aleksander Kwasniewski has been on hand to mediate between the two Ukraine leaders. Kwasniewski played a major role in brokering an agreement during the Orange Revolution.

However, in Slovakia, Foreign Ministry spokesman Ján Škoda said his ministry would not comment on a situation it regarded as an internal matter of Ukraine.

"We are monitoring the situation on a daily basis, and of course we support all democratic forces in Ukraine," he told The Slovak Spectator. "What we are doing is adequate for the situation. We cannot compare what is happening to the Orange Revolution."

Following Juschenko's victory over Janukovych in early 2005, then-Prime Minister Mikuláš Dzurinda said in an interview with The Slovak Spectator that "today we are going to pay even closer attention to Ukraine than yesterday... Slovakia will offer Ukraine all of its experiences gained from reform." The country was praised for its engagement on Ukraine by US President George W. Bush during his speech in Bratislava at the Bush-Putin summit in February 2005.

However, the programme statement of the Fico government from August last year makes no mention of Ukraine as a priority, and stresses that "the economic dimensions" of foreign policy will be "thoroughly strengthened".

High-level contacts with Ukraine have continued under the Fico government, including visits by Fico and Foreign Minister Ján Kubiš this year and Defence Minister František Kašický and Speaker of Parliament Pavol Paška in late 2006. Foreign policy analyst Alexander Duleba of the Slovak Foreign Policy Association said it was too early to tell what the nature of Slovakia's interest in Ukraine would be under the new administration - whether business, or Ukraine's democracy and Western integration.

"In Slovakia there is no public pressure, no demand for the Foreign Ministry to respond," he said. "The situation in Ukraine is also very complicated, because it is possible to cast doubt on what both Juschenko and Janukovych did.

"Moreover, Kwasniewski is in Ukraine because that country is part of Poland's internal domestic discourse, whereas there is no public discourse on Ukraine in Slovakia. We had a debate on Turkey and Kosovo, but never Ukraine."

Duleba added that "personally, I would have expected the Foreign Minister to say something on the subject," noting that as the head of the OSCE, Kubiš along with Kwasniewski had played a key role in resolving the 2004 crisis. However, he added, as long as high-level contacts remained, and Slovakia continued at least formally to support Ukraine's integration to NATO and the EU, "I don't see it as any kind of tragedy."

For Martin Lengyel, a former spokesman for Dzurinda who served as a campaign advisor to Juschenko in 2004, Slovakia's current silence on Ukraine is not helping its Western integration prospects.

Prime Minister Yanukovych supports close relations with Russia, and rejects NATO entry for Ukraine because he says most Ukrainians oppose it.

"Compared to this administration, the Dzurinda government was extremely involved," said Lengyel. "This government is different. It should be engaging with Ukraine, and not just paying visits with airplanes full of businessmen."