Bratislava's pipe organ could be silenced

At a recent concert at St. Martin's Cathedral, Pavol Selecký, the conductor of the Slovak National Theatre played his own composition, the monumental Pápežská Hymna (Papal Anthem), on the cathedral's neo-gothic organ. 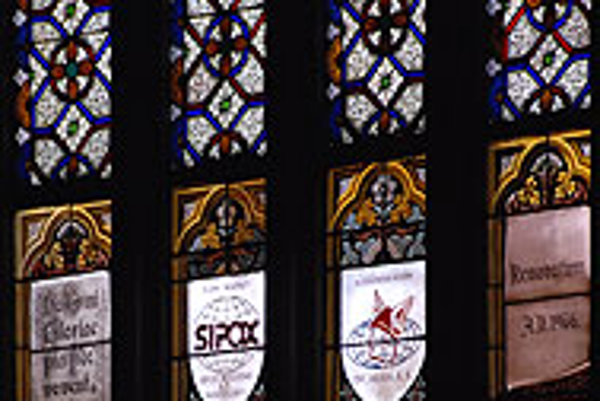 Font size:A-|A+
At a recent concert at St. Martin's Cathedral, Pavol Selecký, the conductor of the Slovak National Theatre played his own composition, the monumental Pápežská Hymna (Papal Anthem), on the cathedral's neo-gothic organ.

But after the performance, Selecký said he was afraid it was the last time the organ's notes would resound in the cathedral.

The 19th-century organ in St. Martin's Cathedral, which has been tied to names like Franz Liszt and Béla Bartók, may be on its way out of the historic cathedral.

The Catholic Church is planning to move the neo-Gothic organ to somewhere else in Slovakia, possibly Žilina. The move could come as early as May.

Stanislav Šurin, the diocesan musician and coordinator of the construction project for the new organ, told The Slovak Spectator the organ needs to be replaced.

"The current organ meets neither the liturgical nor the concert requirements for an organ in a church as important as St. Martin's Cathedral," he said. "The instrument is placed very badly from an acoustic point of view. It is a classic example of how an organ should not be constructed."

Archbishop Ján Sokol of Bratislava refused to comment on the issue.

But many music experts and musicians are opposed to the move. A petition to preserve the organ has so far been signed by 600 artists, including famous Slovak tenor Peter Dvorský, and by many ordinary people.

"The organ is fully functional, I played it last Sunday," Selecký told The Slovak Spectator.

Renowned German organist Bernhard Haas is also convinced about the organ's quality. He praised it profusely in an article published in December 2006 in the periodical Ars Organi.

"The interior of the organ is very dusty after many decades. An overhaul as well as cleaning is necessary," he wrote. "But from the conservationist point of view, the instrument is preserved in a very good state."

He considers the organ's builder, Vincent Možný, the greatest Slovak organ-builder of the second half of the 19th century.

"One would take it for granted, with regard to the national aspect, that his organ in St. Martin's Cathedral would be preserved," he wrote.

Further, he explained that demolishing an organ in a church is not done any more, as important organs from the 19th century are already protected as older instruments with historical value.

But Šurin had a more negative view of Možný's work.

"The contract for the Cathedral was very lucrative for Master Vincent Možný, and that is why he submitted to demands that were unreasonable for the organ - that it be hidden in the space under the tower, so that it did not stand in the way of the orchestra and choir," Šurin said.

But other musicians say the organ's historical value is more important. According to well-known Slovak musician Ján Albrecht, Možný's organ was respected by many renowned musicians.

Bratislava native Franz Schmidt considered the cathedral's organ "the most wonderful phenomenon in music," and ordered an organ like it to be produced by Možný's company. He later transported the organ to Vienna, where it still sits in the Evangelical church on Gumpendorferstrasse.

Musicologist Miroslav Demko told The Slovak Spectator that this organ was personally sponsored by composer Franz Liszt. He had a very close relationship to Bratislava and the Kirchenmusikverein choir, which performed in the cathedral.

"He spent more than 10,000 golden coins for the activities of the choir and for the construction of the organ," Demko said. "At that time, this was a sum that could buy a house."

Demko added that the organ in Cathedral was connected to other musical greats, including Ludwig von Beethoven, Béla Bartók and Ján Levoslav Bella.

The Catholic Church in Slovakia seems to have a completely different opinion.

"Every church has organs that are connected with its history," Šurin said. "Does that mean that if an organ is more than a hundred years old we cannot build another organ there? If the whole world had this opinion, all organ-building companies would go bankrupt."

He also downplayed the connection with Liszt and Bartók.

"Franz Liszt might not have ever seen this organ," Šurin said. "Or maybe he saw it, but never played it. For Liszt's compositions cannot be played on the old organ. Every organist can tell you that. You simply cannot play Liszt's organ pieces on it."

The Regional Monuments Board gave the approval to the move the organ. But the Ministry of Culture does not agree with this and it has asked a higher authority - the Monuments Board of the Slovak republic (PÚ SR) - to reappraise this decision.

"The Culture Minister asked the head of the PÚ SR to take fully into consideration the international treaties that Slovakia has signed (including the Venice Charter and UNESCO's Convention for the Protection of World Cultural and Natural Heritage), according to which it is necessary to protect artefacts of cultural heritage first of all in their original place and in their authentic state, when assessing the request to move the historical organ," Culture Ministry spokesperson Jozef Bednár told The Slovak Spectator.

The ministry made the request in February. So far, the ministry has not received any answer to its appeal.

"The Monuments Board has not issued any statement yet, as it has not received all necessary documents from the church," Bednár said.

The general director of the Monuments Board, Katarína Kosová, told The Slovak Spectator that the Regional Monuments Board issued its decision in compliance with Slovak laws.

"Maybe if we did not allow the Church to move this organ a wave of criticism would come, saying that we were the hold-up for presentations of important musical works by our musicians," she said.

She also said that if PÚ SR did not allow the Church to move the organ, the Church could ask for compensation for not being allowed to handle its property freely.

When asked whether the Culture Ministry could settle the compensation for the church if the PÚ SR did not allow them to replace and move the organ, Bednár said, "We will answer such questions after the PÚ SR decides this issue."

Haas wrote that Gerhard Woehl, who has been approached by the Slovak Catholic church and asked to construct a new organ for St. Martin's Cathedral, is known for his respect for history, so he hoped that Woehl would refuse the job for this reason.

Selecký said if the organ was moved, it might have to be taken apart and put together again in a completely different space than the one it was originally constructed for.

"If it was moved, then it should be called a complete rebuilding and repositioning of the organ in a different space and in a different church, not a mere reassembling," he said.