WITH THE automotive industry doing better than ever in Slovakia, so are the country's two international car shows.
This month, 42 car makers will take part in the 17th annual edition of Autosalón Bratislava. It will be held from April 17 to 22 at Bratislava's Incheba Expo exhibition centre. It is expected to draw more than 200,000 visitors. 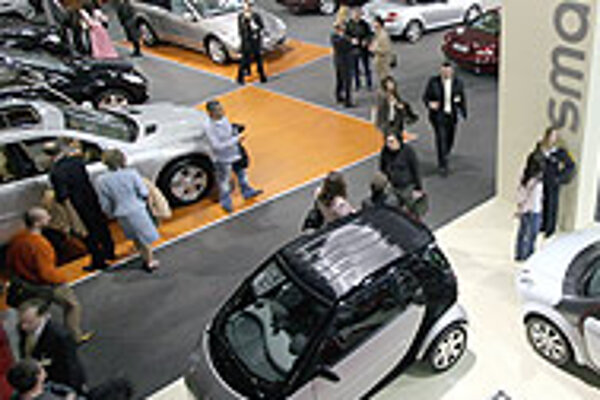 Font size:A-|A+
WITH THE automotive industry doing better than ever in Slovakia, so are the country's two international car shows.

This month, 42 car makers will take part in the 17th annual edition of Autosalón Bratislava. It will be held from April 17 to 22 at Bratislava's Incheba Expo exhibition centre. It is expected to draw more than 200,000 visitors.

The third annual Car Suppliers International Logistics (CSIL) exhibition for automotive industry suppliers will be taking place there at the same time.

Meanwhile, plans are already underway for the international Autosalón Nitra, an annual autumn show held at the Agrokomplex in the western Slovak city of Nitra.

The fact that a country of this size has two international car shows is unusual.

"When I am abroad and speak with Kia representatives, they find it unique that we have two major car shows in Slovakia," said Juraj Vydarený, marketing manager for Kia Motors sales in Slovakia.

Both car shows are quality events and Kia is impressed with the work of the organizers, he added.

Slovakia is becoming an important player in the world's automotive industry. The three carmakers operating in Slovakia - Kia, Volkswagen and PSA Citroen Peugeot - are expected to manufacture almost 800,000 vehicles in 2010, which would make Slovakia the world's number one per capita car manufacturer.

The recent arrival of new carmakers in Slovakia has resulted in more interest in Autosalón Bratislava.

"Since it was first announced that the PSA plant would be constructed in Trnava, the exhibition area and the number of exhibitors has almost doubled," Incheba Expo Bratislava's commercial director, Slavomír Machala, told The Slovak Spectator.

The car companies have also been involved in Slovakia's car shows, something that pleases the organizers of Autosalón Nitra, said Marek Baluška, spokesperson for the Nitra Agrokomplex.

"We focus on these important world manufacturers," he said, adding that the organizers also cooperate with the many suppliers linked to the carmakers.

The newest player on the Slovak automotive market, Kia Motors, sees both of Slovakia's car shows as good opportunities to address the domestic audience.

"Even though both car shows have the word 'international' in their title, they are mainly important on a national level," Vydarený said.

Both car shows are becoming more important each year, as seen by the growing number of visitors, he added.

"I think that in the near future [the visits] will peak, but I do not anticipate a drop in the importance and interest," Vydarený said.

This year's Autosalón Bratislava will feature 232 exhibitors from 12 countries, over an area of 45,000 square metres.

Separate exhibition halls will be devoted to personal and specialty vehicles, car accessories and garage technology, and caravans. Visitors can also take part in skid school, test drives and a road safety workshop. Two transport playgrounds will also be available for the kids.

Nitra organizers expect 250 companies to have exhibits in this year's show, and they are gearing up to start contacting businesses and organizing events and contests, Baluška said.

For the last five years, the Nitra car show has been included in the official calendar for the OICA (an international organization of motor vehicle manufacturers), essentially making it one of the top 14 car shows in the world.

But Machala said the Bratislava car show's sheer size and the number of visitors who attend make it more attractive for exhibitors.

"We do not see the Autosalón in Nitra as a competitor," he said.

Moreover, Bratislava and its surrounding areas make up the region with the most purchasing power in the country, with 40 percent of the total new vehicle sales in the Slovak Republic, he said. So it makes sense that there is more interest in attending car shows there, he added.

But Nitra's exhibition, in Baluška's view, has found its own niche. It is different because manufacturers participate through direct importers.

"I think that the situation on the market shows that both events have found their supporters, as they do not take place at the same time," he said.