NOW THAT Slovakia has become the "Detroit of the East" it has a new challenge on its hands: staying attractive to the auto industry even after countries further east start luring manufacturers with cheaper labour and bigger tax breaks. 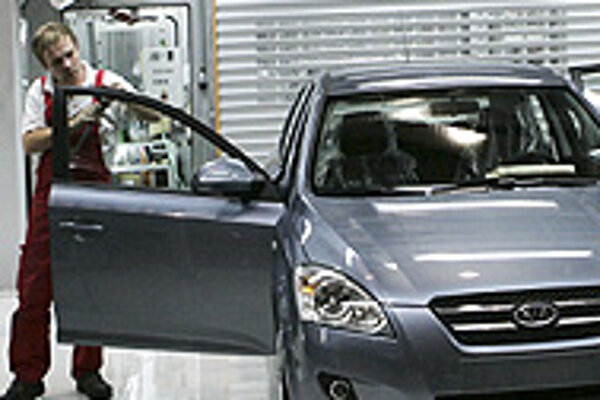 Font size:A-|A+
NOW THAT Slovakia has become the "Detroit of the East" it has a new challenge on its hands: staying attractive to the auto industry even after countries further east start luring manufacturers with cheaper labour and bigger tax breaks.

Slovakia is already home to three auto giants: Volkswagen in Bratislava, KIA in Žilina and PSA Citroen Peugeot in Trnava. Business professionals agree that the rising standard of living in Slovakia - or more importantly, rising production costs - might make the country less attractive to international manufacturers.

But if the country develops a strong support structure for the industry, the car giants are likely to stay longer rather than opting for cheaper labour, said Peter N. C. Cooke, a professor of automotive industries management at the Nottingham Business School in England.

"The automotive industry is strong in other high-cost areas such as Germany and the United Kingdom, which shows that it is possible to be both higher cost and successful," Cooke told The Slovak Spectator.

"Germany, for example, has a huge sub-structure of sophisticated mid-size engineering companies, logistics companies, R&D facilities and universities that can help support the industry," Cooke said. "Slovakia will need to develop a similar supporting structure so that the original equipment manufacturers will have all the technical and local support they require close at hand rather than needing to look elsewhere. Those services, if they are of good quality, can encourage the major players to remain."

A support structure also has to include things such as a steady supply of trained employees, supervisors and managers, Cooke said.

"It is important that over time, Slovakia can provide home-grown management," he said. "Many managers running those new companies have been 'parachuted in' and will move on to other international appointments. To be able to replace them with indigenous managers adds stability to the businesses."

Government grants and incentives should not seek to move businesses to remote areas or areas with poor communication, or to absorb small or isolated pockets of high unemployment.

Well-developed infrastructure and electronic communication are increasingly important, he said. It is also crucial that companies in the same sector are close to each other and thus are able to minimise logistics costs and exchange ideas.

"Ideally the industry rather than local political benefit should be the motivating element," Cooke said.

Marián Králik, the vice-dean for cooperation with the industry at Slovak Technical University, agreed that the rising costs would be balanced by having higher productivity per worker, because foreign investors are now more interested in the quality of the workforce.

"The product's quality plays the most important role in terms of competition," Králik said.

"Not only car producers, but also the component suppliers have looked for young people with a technical university education and good language skills," Králik said. "Automotive companies are not interested only in automotive course graduates, but also in those who have a good command of engineering technologies, logistics, production control, quality management and computer skills."

Education, though, is not the only issue that the Slovak workforce has been struggling with. Cooke stressed the importance of migrant and local workers.

"If the workforce consists of migrants who have moved to Slovakia from other countries, why should the original equipment manufacturers not move their manufacturing facilities to the source of the labour, where costs may be lower?" Cooke said.

Though this is not an immediate threat, once factories require major refurbishment or significant capital investment, or the manufacturing needs change, their owners may review the whole investment situation and make a decision to move elsewhere. That is the time when the support structure and the quality of the labour force becomes critical, he said.

"The workforce has to move from a philosophy of 'low cost' to one of 'value added'," said Cooke.

Many other countries would like those jobs and have people who will work for less than Slovaks are paid, he added.

"A workforce has to be careful not to be greedy - or the jobs will move," Cooke said.

In order to keep the country competitive, the industry needs to focus on research and development, Jozef Uhrík, president of the Automotive Industry Association, told the Hospodárske Noviny daily. They especially need to focus on the areas of products, technologies and control systems, including logistics.

According to Cooke, it is important that Slovakia develops itself as a 'centre of excellence' in at least two or three areas.

"Perhaps there are certain universities, companies or technical institutes that already have that necessary 'spark of excellence' that could be nurtured to world class," he said. "Realistically, to begin with, those centres will be quite small. But government encouragement, not necessarily just through financial support, may be necessary to help them to move ahead."

The department of automobiles, ships and combustion engines at the Slovak Technical University's Faculty of Mechanical Engineering in Bratislava is one of the most important Slovak automotive research centres.

"For certain reasons, such as the decrease of oil resources and the ecological effects of the engine's operation, we can no longer count on using oil for motor vehicle engines," Viktor Ferencey, a professor from the department, told The Slovak Spectator. "Therefore we target our research on the projects that offer solutions for the future of the humankind. Namely, we are trying to develop hybrid engines for vehicles, which is a transition stage in the development of the electro engine."

In fact, there are many attempts to improve cooperation between universities and the industry, such as the Automotive Industry Association's efforts to establish five research centres - one at the Slovak Academy of Sciences and at four other universities.

"Together with Volkswagen we are working on the so-called 'Centre of Technological Quality Transfer'," Králik said. "The centre's activities will be focused on the control of automotive products' quality, but also on common research and training in the area of production quality."

They also want to establish a council where the most important automotive companies in Slovakia will be represented. The council's aim will be the exchange of information to help make education and training more effective.

Researchers from the Faculty of Mechanical Engineering have been trying to cooperate with the big automotive industry factories since they first started operating in Slovakia. Today they have many common projects with Volkswagen and PSA Peugeot Citroen, and are working on building links with Kia.

The usual ways of cooperation are an expert lecturer exchanges between the university and the companies, building shared laboratories and making opportunities for students to carry out research for their final theses at the factory.

Ferencey believes that both Slovakia's qualified workforce and its research projects can help convince big auto manufacturers to stay.

"If our projects are successful, we can convince the big companies that we are able to apply sophisticated technologies to their products," Ferencey said. "The stumbling block, however, is the cost of the technological innovations, because these days economists worry about every crown that raises production costs. At the end of the day, technical perfection is limited by economic decisions."