THE NEW vice-chairman of the Hungarian Coalition Party (SMK), Miklós Duray, says Slovak public officials should apologize to the Hungarian minority for the treatment they received in the post-war period of 1945 to 1948, and give financial compensation to any Hungarian citizens who were unjustly punished. 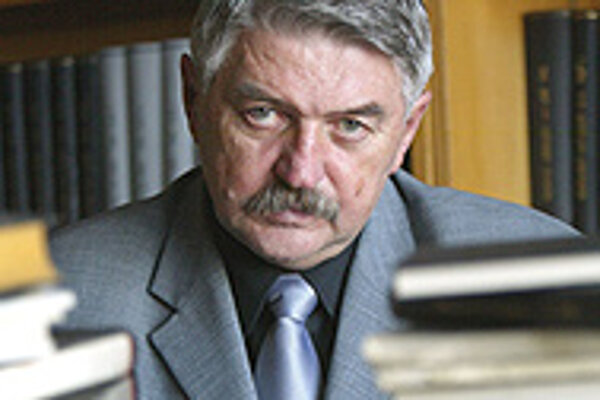 Font size:A-|A+0
THE NEW vice-chairman of the Hungarian Coalition Party (SMK), Miklós Duray, says Slovak public officials should apologize to the Hungarian minority for the treatment they received in the post-war period of 1945 to 1948, and give financial compensation to any Hungarian citizens who were unjustly punished.

"Hungarians were stripped of all civil rights and were considered criminals, just because they were Hungarians," Duray told the Hospodárske Noviny daily on April 10. "Apologies are not enough, the wrongdoings should be rectified and righted.

"Those who were wronged should have their properties restored. If they can't get the same properties, then they should be financially compensated."

With these words, Duray re-opened the issue of the so-called Beneš decrees (Benešove dekréty), and provoked a strong, mostly negative response from both ruling and opposition politicians.

While Duray said he did not intend to start another debate around the Slovak-Hungarian borders, critics said he did so regardless.

"I think that Duray has already been writing a programme of autonomy," said Anna Belousovová, the vice-chair of the Slovak National Party (SNS). "Opening the question of the Beneš decrees is only about changing the borders. The Beneš decrees are resolved and closed for us, so there is nothing to discuss anyway."

"I think that the idea of re-examining the Beneš decrees can only be proposed by someone whose intention is to break the good relations between Slovaks and Hungarians and open old wounds," he said.

Duray's boss and the new chairman of the SMK, Pál Csáky, did not oppose his vice-chairman's statement, but he did omit the demand for financial compensation.

"Slovakia should at least say sorry to those people who were persecuted just because of their nationality, due to the principle of collective guilt," Csáky said.

From 1940 to 1945, when Czechoslovakia did not exist because it was de facto occupied, exiled president Edvard Beneš issued about 230 presidential decrees solving issues concerning Slovakia and the Czech Republic.

Degree No. 33, drafted after consultations with the Slovak National Council, stripped citizens of Hungarian ethnicity of their civil rights. Their property was expropriated and about 90,000 ethnic Hungarian were deported to Hungary. Reciprocally and just as involuntarily, around 70,000 ethnic Slovaks were sent from Hungary to Czechoslovakia.

"The toughest measure against Hungarians was that the ruling powers resettled them in the Czech borderlands - empty areas from which the Germans were displaced," Dušan Kováč, a historian and vice-president of the Slovak Academy of Sciences, told The Slovak Spectator.

"After 1948, citizens of Hungarian ethnicity were granted citizenship. A number of them also had their property returned. But not all of them, because in the meantime the law about the expropriation of property came into force and it applied to all citizens of Czechoslovakia, not only those of German and Hungarian nationality."

Kováč has a different opinion of Duray's statements than the Slovak politicians who criticized them.

"This question poses a problem, no doubt. It should be discussed," he said. "Many people definitely were treated unjustly. We should not be insensitive to the fact that someone was treated by the ruling power as an enemy, although not convicted and sentenced, just because he or she belonged to a certain ethnic group.

"However, it has to be said that after the war things like this happened everywhere."

When asked whether the latest debate had to do with the fact that Slovakia has not yet come to terms with the impacts of the Second War World, Kováč answered: "Surely we have not. We tend to see many things in a simplified, black-and-white way. So far, nobody has found the time for discussion."

Kováč said the matter could be resolved if parliament adopts a declaration apologizing to the Hungarian minority.

"A declaration would be useful, as it would show that the Slovak parliament has, at least, the will to reflect on this period and admit that citizens of Hungarian origin were wronged, as they were affected by the principle of collective guilt," he said.

However, he immediately added that when it comes to financial compensation for the property of ethnic Hungarian citizens that was confiscated in those times, every case should be assessed individually.

Currently, more than half a million ethnic Hungarians live in Slovakia.

Political scientist Grigorij Mesežnikov shares Kováč's view, but he thinks the issue of compensation will be ignored.

"Although the correction of historical injustices is important for many members of the ethnic Hungarian community and is politically alive and legitimate, the nationalist nature of the present ruling coalition makes the issue impossible to address," Mesežnikov told The Slovak Spectator.