MPs to decide on Labour Code

THE DRAFT revision to the Labour Code, which PM Robert Fico has dubbed "the law of the year", was approved by the cabinet on April 18. But with many of its key provisions still to be firmed up, or even written, unions and business groups are gearing up for a decisive battle over the bill in parliament. 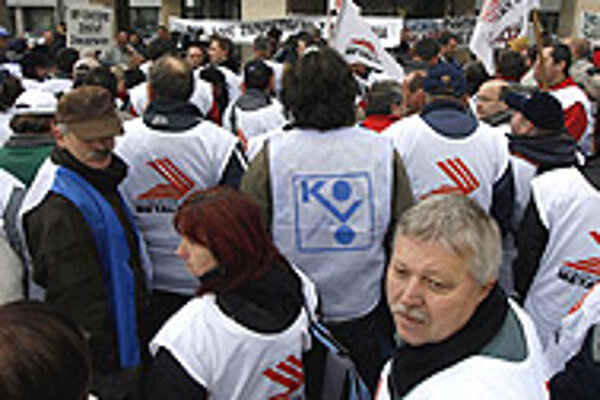 Font size:A-|A+
THE DRAFT revision to the Labour Code, which PM Robert Fico has dubbed "the law of the year", was approved by the cabinet on April 18. But with many of its key provisions still to be firmed up, or even written, unions and business groups are gearing up for a decisive battle over the bill in parliament.

According to the left-leaning Fico government, the Labour Code revision seeks to give greater protection to employees, such as by limiting their overtime, increasing layoff settlements, and entrenching the power of union representatives in the workplace.

Following weeks of intense pressure from employers leading up to the cabinet meeting, the Labour Ministry was forced to back down on some of its more controversial provisions. The bill that the cabinet finally approved, for example, does not allow union reps to share decisions over how much work employees are required to do, nor does it limit overtime to 100 hours annually.

Nevertheless, labour representatives said they were happy with the outcome so far. "If parliament approves it in this form, it will be a good thing," said Emil Machyna, head of the KOVO metalworkers' union.

Fico also declared his satisfaction with the draft. "The status of employees will be much stronger than it is at the moment," he said at a press conference following the cabinet meeting.

Employers, on the other hand, were disappointed at the results of weeks of lobbying. On emerging from last-ditch talks with Fico and the unions on April 17, Jozef Špirko, the vice-chairman of the National Employers' Union, said that "of the 30 problematic issues we wanted to debate with the prime minister, 28 remained unresolved."

Business groups promised to fight to secure further concessions once the next session of parliament begins on May 9. "We will now meet with all parliamentary parties and the heads of every caucus," said Rastislav Machunka of the Association of Employers' Unions. "We will be talking with them about those 30 problematic issues, and the prime minister himself has said that these issues will be resolved in parliament."

Among the main points that remain to be resolved in parliament, the proposal that employees who are laid off receive a two-month notice period, and then two months' pay on top of that as a settlement, is probably the most serious. In effectively raising the settlement amount from two to four months' pay, the proposal is among many that employers say will increase their costs.

According to the Slovak Entrepreneurs' Alliance, the Labour Code amendment in the form it was originally proposed in January would have increased business costs by 2.75 percent on average. The bill approved by cabinet, while watered down, would still raise costs by 1.54 percent, or Sk56 billion, the group said.

The unions have offered a compromise - a five-day notice period, plus three months' wages - but it was rejected by business representatives. Fico, on the other hand, said he regarded the dismissal compensation proposal as "very important", and one that he would fight for in parliament.

Another issue that remains unresolved is the definition of "dependent work", according to which the government proposed to forbid employers from allowing any work that could be done by full-time employees to be done by self-employed contractors.

In a compromise deal reached before the cabinet meeting, it was proposed that the "dependent work" definition be tightened to make it almost impossible to prove that independent contractors were doing employee-style work. "In practice, what we agreed on will rule out cases in which Tesco clerks are forced to become independent contractors," Fico said.

Given that employers in Slovakia must pay a 35.5-percent surcharge on the salaries of full-time employees to social funds, some have abused trade license rules to force regular employees to become self-employed, and thus bear the costs of their social fund payments themselves.

Other unfinished business includes a requirement that employers pay the wages of full-time union reps, and a rule that temporary employment contracts can be signed for a maximum of three years.

While the government has a solid majority with 82 votes in the 150-seat legislature, easily enough to pass the amendment, the coalition partners of Fico's social democratic Smer party have indicated they may go along with further changes proposed by employers.

Milan Urbáni of the Movement for a Democratic Slovakia said his party still wanted to debate dismissal pay. "There are a few differences there that I am convinced we can resolve," he said.

Ján Slota, chairman of the far-right Slovak National Party (SNS), said his party would have several changes to make in parliament.

"The Labour Code proposal gives too much room to unions and is somewhat off-putting for foreign investors," he said. "The SNS is definitely a conservative party. Smer will not take it as a betrayal if we vote for some amending motions, because they are social democrats, and if we all wanted the same things, we'd all be social democrats.

"Details, such as paying the salaries of union reps, or allowing union reps to halt production because they don't think it is safe, will be up to parliament to decide."