Luxury in the capital

MOST Slovaks can only dream of a designer flat with an internet connection, air-conditioning, a security monitoring system and French windows opening onto a terrace with a spectacular view. 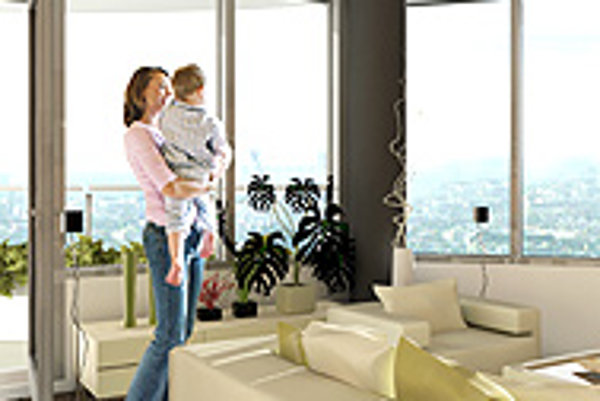 Font size:A-|A+
MOST Slovaks can only dream of a designer flat with an internet connection, air-conditioning, a security monitoring system and French windows opening onto a terrace with a spectacular view.

However, a Sk5 million (€150,000) investment into housing is all it takes for those who no longer wish to live in socialist architecture to raise their living standards.

More than half of the Slovak population lives in blocks of flats known as paneláky, massive concrete blocks built with second-rate construction materials and a low quality design.

A third of all blocks of flats in Slovakia (more than 11,000) are in the Bratislava Region. However, it is still the capital alone that has a market strong enough for the booming growth in luxury housing.

One of the first above-standard housing projects in Slovakia was the Karloveské Rameno residential estate containing 144 above-standard apartments, built by developer J&T Real Estate. The project surpassed all expectations when the expensive apartments - selling for about Sk15 million (€450,000) - sold out in less than two days.

The success of the project, which was finished in September 2006, showed that a market for this type of housing really exists. The same developer began constructing the River Park complex, offering 340 luxury apartments, on the bank of the Danube last May.

The developer said this project might be the first on the market to fully meet all the attributes of high-standard housing. Even apartments that are often categorized as luxury lack at least one attribute, said J&T Real Estate spokesman Maroš Sýkora.

The deluxe apartments in River Park will have the services of the five-star Kempinski Hotel included in the price. The hotel, along with shopping centres, restaurants, office space, a fitness centre and a bank, will be part of the complex, creating a space that the developer describes as a "town within a town".

Since some of the apartments will be located right above the river surface, the water from the Danube will be used to air condition the building.

The Danube riverbank could soon become the new downtown of Bratislava, attracting crowds not only with River Park but also the Eurovea multi-purpose project by Irish developer Ballymore Properties. The first phase of construction is expected to be completed by late 2009.

With an average gross wage of Sk18,761 (€560) most Slovaks would theoretically have to work about 20 years to afford a 40-square-metre flat in Eurovea or River Park. But developers are quite frank about not building these projects with the average Slovak in mind.

While Sýkora said J&T would like to appeal to the most solvent group of clients, the project manager of Lexxus (developer of III Towers), Michal Pauer, imagined the future residents of the housing project as: "Successful people around the age of 28 and older, enjoying their (often hectic) life, looking for sports activities and culture."

The III Towers project, which is still under construction, has either sold or reserved almost all of its 633 apartments and maisonettes by now. Pauer said every fifth buyer was a foreigner.

The foreign clients (mostly British and Irish) purchase the flats as an investment, usually planning to rent them out. Experts agree they are not likely to regret their investment. In the last five years, the prices of flats have doubled in Bratislava and the trend is likely to continue since the supply is still not meeting the demand.

The architects thought about the "green side" of the projects as well, surrounding the residential buildings with parks. In the case of Lipový Park on Bottova Street, they even "placed" the park on one building's roof.

But the Parkville residential complex located in Bratislava Vinohrady on Koliba hill will have the closest contact with nature. The developer Orco Property Group is offering 92 luxury apartments in 10 villas with a panoramic view of the capital. Each apartment will have either a balcony, a roof terrace or its own garden. Prices start from Sk78,000 (€2,340) per square metre.

The residential complex, designed by London's Jestico & Whiles architectural group, will have its own surveillance system to ensure security. Construction started in February and is expected to end in 2008. Thirty percent of the apartments are already sold.

"Building higher-quality apartments will force flats currently considered luxury housing down to a lower category," Sýkora said. As a result, better housing might be available for the middle class in a couple of years, he said.