Socialist housing project will get another facelift

BRATISLAVA'S southern suburb of Petržalka, with its dilapidated concrete blocks of flats inhabited by over 100,000 people, is still the most visible part of the city's socialist legacy. People often call this labyrinth-like part of town a concrete jungle. 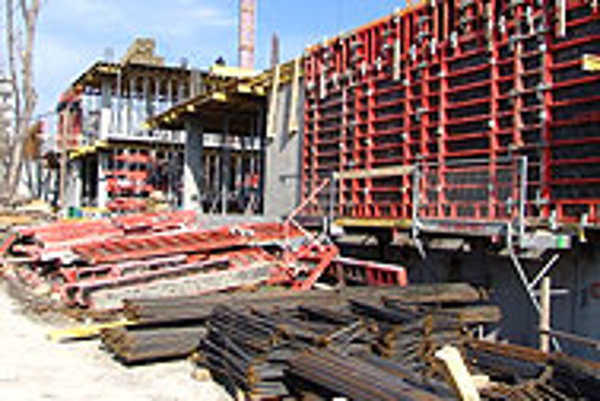 Font size:A-|A+0
BRATISLAVA'S southern suburb of Petržalka, with its dilapidated concrete blocks of flats inhabited by over 100,000 people, is still the most visible part of the city's socialist legacy. People often call this labyrinth-like part of town a concrete jungle.

However, cheaper prices and a good location also made Petržalka an attractive location for hypermarkets, logistics centres and shopping centres. Now, the Vienna Gate development sprouting up next to Petržalka's railway station and the Petržalské Korzo (Petržalka Promenade) demonstrate that the suburb's qualities are also luring residential real estate investments to Petržalka.

Petržalské Korzo, completed less than two years ago, was an attempt to give the concrete jungle a human face and make it a more pleasant place to live. It is a foot and cycle path that connects the Petržalka railway station to the Bratislava city centre.

Construction on Petržalské Korzo started in February 2003 and finished in June 2005. It cost approximately Sk80 million (€2.4 million) to build. Most of that was covered by a PHARE fund (EU development fund) subsidy and the rest came from the state budget and the local government.

The Korzo intersects five busy roads. All the crossings are barrier-free and evenly paved to make them safer for blind people.

"The Korzo is something that is more connected with the Bratislava Old Town and its streets, with the historic part of the capital, but we in Petržalka thought that we also deserve something similar," said then-Petržalka mayor Vladimír Bajaník at the opening of the promenade in September 2005. "I look forward to times when Korzo meetings and walks become popular among both young and old, and the promenade really becomes a pulsing place on the map of Petržalka."

Petržalské Korzo, said the former mayor, will grow further with the extension of the promenade, new cafeterias, and green space. His deputy Dušan Vávra, who still works for the local government, said the project received a positive response even in its initial stages and it is already getting popular.

For pedestrians, cyclists and inline skaters, the Korzo is an ideal connection to the Janka Kráľa public park, Bratislava's downtown and the international bike path that runs along the Danube from Győr, Hungary, to Passau, Germany, Vávra told The Slovak Spectator.

The new Vienna Gate complex will also take advantage of the promenade.

"Vienna Gate connects directly with Petržalské Korzo, and the walkway will go through a glass passage between shops on the complex's ground floor," said Jana Kľúčiková, executive director of Key2B Marketing Communication Company, which handles the marketing for the complex.

Kľúčiková told The Slovak Spectator that this part will be extended even further to the Matador outdoor swimming pool, creating part of a revitalized sports and leisure zone.

Construction on Vienna Gate, a multi-functional apartment complex with a view of the Austrian landscape, was launched in April 2006. Its investors are Vienna Gate 1, and developer MEI Slovakia, a member of the Dutch Central Europe Group.

The first floor, which will be shared by both high-rise apartment buildings, Vienna and Gate, has already been built. There will be a commercial section with restaurants, shops, a fitness centre, and other amenities such as a pharmacy, bank, children's area and dry cleaners.

Vienna Gate has already attracted interest from both Slovak and foreign clients because of its location, Kľúčiková said.

"The location is constantly becoming more important, not only because of its closeness to downtown, but also because of its connection to the Austrian and Hungarian motorway networks," said Kľúčiková. "The coming high-speed TGV train connection [linking Paris to Vienna with an extension to Bratislava] also adds to the project's attractiveness."

The French TGV, which can reach speeds of up to 300 kilometres an hour, is to be extended to Bratislava by 2013 at the earliest, the Hospodárske Noviny daily wrote.

But the arrival of Vienna Gate could also cause complications, Vávra said.

"The Vienna Gate complex will certainly bring more people to the Korzo, and I can see a [possible] negative effects in terms of transportation there - both a static one, with parking, and a dynamic one, as a result of the larger number of cars and the design of the existing crossroads," Vávra said.

However, if Vienna Gate is willing to participate in a solution to this problem, the complex will make the whole area more attractive, he added.

Private companies like IDO Hutný Projekt and Vodohospo-dárska Výstavba that are constructing their buildings next to the Petržalské Korzo can significantly contribute to the promenade's attractiveness, said Vávra.

"The companies want to incorporate their buildings into the Korzo by building green spaces with fountains and planting trees," Vávra said. The Petržalka council will require developers to build barrier-free access for wheelchair users and cyclists next to Einsteinova Street, he said.