AFTER 21 long years of construction, Bratislava has a new theatre. The new house of drama, opera, and ballet, designed by architects Peter Bauer, Martin Kusý and Pavol Paňák during the socialist regime, was ceremonially opened on April 14. 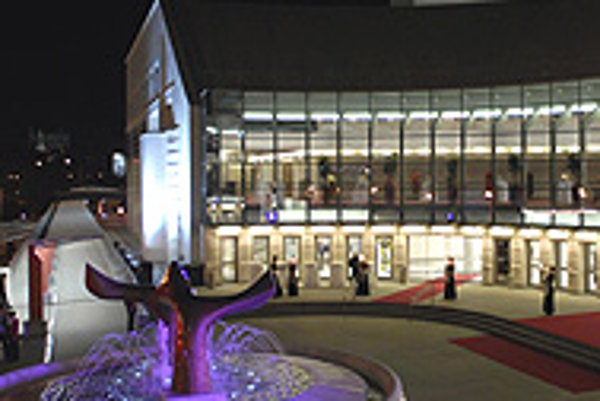 Font size:A-|A+0
AFTER 21 long years of construction, Bratislava has a new theatre. The new house of drama, opera, and ballet, designed by architects Peter Bauer, Martin Kusý and Pavol Paňák during the socialist regime, was ceremonially opened on April 14.

That evening, all problems concerning the time- and money-consuming project, as well as discussions as to whether the state should keep the building or sell it to developers or how many films could have been made for the money invested into it, were forgotten, and all the attendees just wished the building all the best.

In the opening speech, SND director Silvia Hroncová thanked former as well as current ministers of culture and finance, SND employees, and the public and civic initiatives supporting completion of the new building.

"I wish this theatre to become an honourable home to all the theatre people in Slovakia. I hope that visitors love this theatre, attend performances here, and feel happy here," she said.

Originally, the opera Krútňava (Whirlpool) by Slovak composer Eugen Suchoň was to open the new premises. But after Teatro alla Scalla in Milan refused to allow tenor Miroslav Dvorský to miss rehearsals there in order to sing the lead in the opera, the SND postponed its premiere and replaced it with a gala evening featuring such stars as sopranos Gabriela Beňačková and Eva Urbanová, mezzo soprano Jolana Fogašová, soprano Adriana Kohútková, tenors Peter Dvorský and Sergej Larin, and baritone Martin Babjak, all of whom sang a selection of opera arias under the baton of the chief conductor of the SND Opera, Rastislav Štúr.

Due to its new premises, the SND had to leave P.O. Hviezdoslav Theatre and Malá Scéna and move its dramatic performances to the new edifice, although some plays will be performed in the historical SND building at Hviezdoslavovo Square. The SND kept this building, where it will also continue to present some of its opera and ballet pieces.

In April, SND audiences can look forward to premieres of the opera Ariadne auf Naxos by Richard Strauss, scheduled for April 27 and 28, and the new ballet, Warhol, to be premiered on April 20. A drama by Slovak author Viliam Klimáček, Kto sa bojí Beatles (With a Little Help From My Friends), premieres on April 21, and R.U.R., a play by Czech playwright Karel Čapek, will take place on April 22.

The white building, faced with travertine from the Spiš region, contains two large theatres, one smaller recital hall, rehearsal rooms, 200 offices and many other spaces. The opera and ballet theatre has a capacity of 900 seats, and there are 640 seats in the drama hall. The recital hall holds 150 to 190 spectators.

Construction on the theatre started in April, 1986. Costs were projected at 874 million Czechoslovak crowns, but rose as the construction was prolonged by 15 years to about Sk5 billion (€149.3 million).

The entire area by the Danube is now experiencing a huge construction boom. J&T has reconstructed the nearby business centre, Tower 115, and Irish developer Ballymore Properties is constructing a development to include apartments, shops, office premises, and leisure facilities.