LAST December was a bright time for the award-winning string orchestra of the Rajter Academy for Young Artists in Bratislava.
Its aspiring musicians, ranging in age and experience, were fresh off the success of their annual Christmas concert, and already tapping their toes in anticipation of their next appearance: a celebration at the Slovak Philharmonic in April to mark the academy's fiftieth anniversary. 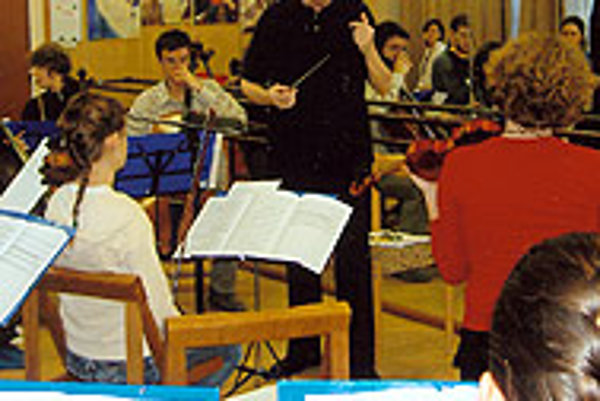 Font size:A-|A+0
LAST December was a bright time for the award-winning string orchestra of the Rajter Academy for Young Artists in Bratislava.

Its aspiring musicians, ranging in age and experience, were fresh off the success of their annual Christmas concert, and already tapping their toes in anticipation of their next appearance: a celebration at the Slovak Philharmonic in April to mark the academy's fiftieth anniversary.

But just as plans got under way, tragedy struck. Around New Year, the orchestra's beloved conductor, Miroslav Šmíd, who had led the ensemble since 1995, passed away, with no replacement in sight.

"We didn't know what to do," Mária Krnová, the academy's sprightly director, told The Slovak Spectator. "It's such an honor to play at the Slovak Philharmonic, the greatest institution in the country, and we had guests coming from at least three different countries. We couldn't cancel."

So as soon as the semester restarted in January, the Rajter Academy began the search for a substitute. They were actually lucky enough to find one, but that cooperation ended up lasting only a few weeks.

"By that time, we were beyond anxious," Krnová recalled as she nervously shifted the papers and pens on her desk at the academy's administrative building on Sklenárova Street.

But then the academy remembered Larry Newland, the American conductor who had organized and led the Philharmonic's popular series of Young People's Concerts during its 2005/2006 season. The academy had helped Newland out with one of the concerts by lending him a few of their students to entertain the arriving guests.

"That was how I came to know the Rajter Academy," Newland explained, "so when they needed someone, they called me, and I was happy to take it."

Named after Ľudovít Rajter, Slovakia's iconic conductor and composer, and the first principal conductor of the Slovak Philharmonic, the Rajter Academy is the oldest of Bratislava's twelve private music academies, which have taken on an increased role in arts education since the end of communism. The academy employs 50 professional musicians who instruct over 1,000 students, nearly half of whom study instrumental music, as well as art and dance.

"It's very touching that the academy was named after [my husband] because he always kept a lively relationship to young people," said Alžbeta Rajterová, the conductor's widow, who sits on the Rajter Academy's advisory board. "And that's why the academy's so vitally important, because nothing is as beautiful or beneficial in the long term as exposing children to the miracle of art, discovering their exceptional talents and shaping their first steps."

Since taking over the rehearsals, Newland has been impressed with the orchestra's musicianship.

"Some of them are extremely fine players, and the whole group is so enthusiastic about working together," he said. "My tempos can be faster than Šmíd's, but they just pop right up, then go home and practice it."

And surprisingly, some of the orchestra's players are new to the world of music.

"There's one Korean cellist who's only been playing for six months, but she just works like crazy, and she's been doing great," Newland said.

The program for the anniversary concert will be light, with pieces by Šmíd, Mozart, and two Peter Breiner concerto grossos based on songs by The Beatles. Students from the academy's partner schools in Prague, Brno, Vienna and Seyssins-Grenoble will also perform.

For Newland, there are, of course, some differences between preparing a youth orchestra and adult professionals.