THE RELATIONSHIP between the government and the Slovak media grew even more tense last week.
At a meeting in Veľký Krtíš on April 22, Prime Minister Robert Fico did not even try to hide his disappointment with the media's conduct. 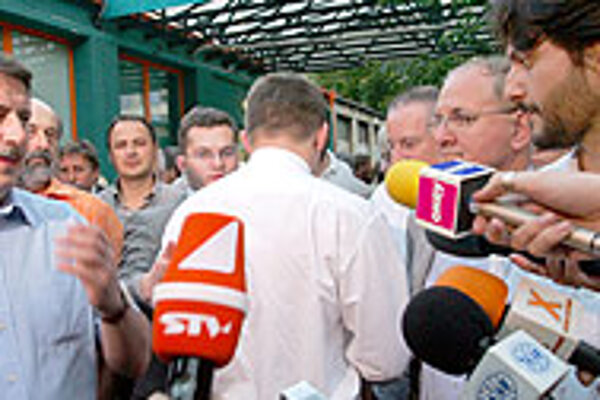 Font size:A-|A+
THE RELATIONSHIP between the government and the Slovak media grew even more tense last week.

At a meeting in Veľký Krtíš on April 22, Prime Minister Robert Fico did not even try to hide his disappointment with the media's conduct.

"The media have become the political opposition of this government and therefore citizens do not have access to objective information about our activities," he said.

At the meeting, Fico also expressed his disappointment that not even the public media reported on the government in a way that pleased him, and called it a mistake.

"We pay the public media to report objectively," he said.

Government spokesperson Silvia Glendová did not respond to an e-mail request from The Slovak Spectator for comment on Fico's statements.

Then on April 25, the Slovak government approved a resolution to protect citizens from media bias. This includes the right of reply in the Press Law, which would let people react immediately to untrue or distorted information published in the media.

"The number of untrue and un-objective reports aimed at the government, its representatives and the political parties representing the government has increased in much of the Slovak media," said the government statement on the matter. "(The government) also finds that the legal institutions that allow people to seek redress, especially the immediate correction of untrue and distorting information, practically do not work, and they are often bluntly ignored. It is also worth mentioning the growing number of attacks that ignore all moral and professional principles."

In this way, the basic right of the public to have access to objective information is being violated, Fico said.

At a journalism conference on the same day, media experts reacted to Fico's statements.

"It is sad when a prime minister perceives the media as his enemies," said Arne König, the president of the European Federation of Journalists, who was in Slovakia at the time.

Commenting on the government's proposal to increase the effectiveness of the right of reply when untrue information is published, Zuzana Krútka, the vice-president of the Slovak Syndicate of Journalists (the professional journalists' union) said that a similar issue has already been solved legislatively.

Jiří Pehe was the chief political advisor to former Czech president Václav Havel, and is currently a political analyst and the director of New York University in Prague. He said the government's statements are a typical example of the fact that in central Europe's new democratic countries, politicians do not understand the media and do not know how to work with them.

"Very often, this gives the impression that the media are anti-governmental, as if they would want to harm the government in some way. Governmental politicians very often understand it that way. They are trapped in a communist way of thinking and are convinced that the task of the media is to ... promote the government's programme.

Political scientist and professor Miroslav Kusý told The Slovak Spectator that Fico has felt degraded by media ever since he took over as prime minister.

"He got into a confrontational position with media and he cannot extricate himself," Kusý said. "The media represent a threat to him. This is a very unfortunate step for him, as it would be for any politician.

"A politician cannot win the fight with media. A confrontational tone towards media is a deadly danger for every politician."

Pehe said Fico has a similar stance towards the media as most of the post-communist politicians in central Europe, including the leaders of the Czech Republic, Poland and Hungary.

"It means that he cannot handle the media well, he cannot work with them and he takes every criticism too personally," he said. "This is not just a problem in Slovakia. It is the general symptom of a low political culture and the immaturity of politicians, who instead of using the media to their advantage, get involved in conflict with the media and begin to behave arrogantly.

"Even after 17 years, politicians have not yet learned the standards of democratic culture."

However, Pehe admitted that the relationship of the media towards politicians has changed recently. When countries like Slovakia were going through the European Union accession process, there was a certain consensus between politicians and journalists, he said.

"There simply was a quite strong social consensus that this was a good thing. So media were a bit - I would not dare to say they were not critical towards politicians, but they were playing a bit of the same game: we have to join the European Union," he said. "And now, these two poles seem to be separating. The media are much harsher towards politicians and politicians are much more populist, and thus they give the media much more fodder for criticism."

From the beginning, it was clear that Fico would not have very good relations with the media. Following the June 2006 election, journalists had to wait all night outside Smer party headquarters without a word from Fico.

In an interview with the Sme daily on September 2, Glendová explained the move by saying: "The media have never been much in favour of Smer and now they are not much in favour of the government. Election night might have been the expression of our stance towards journalists."

In the same interview, she openly expressed Smer's antagonism towards journalists by saying, "We are waging a fight against the opposition and against the media, and these are two very strong blocs, so our work will be very difficult.

Before last week's cabinet meeting, Fico attacked the dailies Sme and Plus Jeden Deň very sharply in a statement signed by Glendová. She referred to an article in Sme from April 25 about allegations regarding Miroslav Šlouf, a controversial figure in Czech politics, who is now advising Fico.

She said about Sme that, "It is not a coincidence that the authors of the articles did not take the trouble to address the Prime Minister with questions concerning this issue, either directly or through his spokesperson, and thus allow the person who was the subject of the article to respond."

The author of the Sme article demonstrated to The Slovak Spectator that he had tried to contact Glendová prior to publishing the article and that she never responded.