WHILE SLOVAK and foreign tourists prefer to visit the same regions in Slovakia, foreign visitors are less interested in history and more concerned about the quality of services.
Almost half of Slovaks think the High Tatras are the most attractive region for tourism, according to a survey from the TNS SK polling agency conducted in November. One fifth chose Slovak Paradise (Slovenský Raj) as their favourite region, and one tenth chose the Low Tatras. 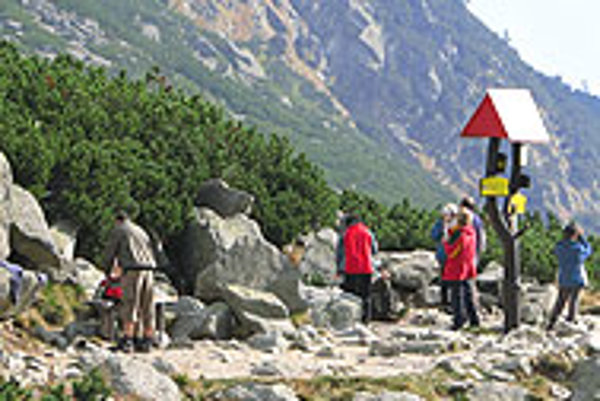 Font size:A-|A+0
WHILE SLOVAK and foreign tourists prefer to visit the same regions in Slovakia, foreign visitors are less interested in history and more concerned about the quality of services.

Almost half of Slovaks think the High Tatras are the most attractive region for tourism, according to a survey from the TNS SK polling agency conducted in November. One fifth chose Slovak Paradise (Slovenský Raj) as their favourite region, and one tenth chose the Low Tatras.

Orava in the northwest and Bratislava, Slovakia's capital city, were also at the top of the list.

According to the country's tourism board, foreign visitors seem to have similar preferences.

"Lately the most visited regions of Slovakia have been Liptov, the High Tatras, the Low Tatras, Orava and Kysuce," Jana Horečná Budínska from the Slovak Tourist Board (SACR) told The Slovak Spectator. "We have visitors from The Netherlands, the Czech Republic and Poland who come in the summer to hike or do mountain trekking."

"Bratislava registered an enormous growth in the number of foreign visitors last year, amounting to 11 percent," she said.

That's even more impressive when you compare it to the growth in tourism in other European cities, she said - for example, the number of foreign visitors in Vienna only grew by three percent in 2006.

Most Slovaks seek entertainment and cultural experiences during their vacations. They also look for a chance to relax in the mountains and at spas, and to see historical sites, when choosing their trips.

Slovaks are gradually paying more attention to healthy lifestyles and that is influencing their vacation choices, with many travelling for sports.

Foreign visitors, however, are more concerned about the quality of services offered.

"Services are improving in general, but they differ depending on the region and the standard of the facility," Budínska said.

Most tourists who visit Slovakia are fascinated by the beautiful natural scenery and wide variety of activities, she said. But they complain of closed information bureaus, bad transportation connections, a lack of information on opening hours, no information in foreign languages and poor-quality tour guides.

Even more surprising, the traditional welcoming smile and warm words seem to have disappeared from the repertoire of Slovak service providers, she added.

Budínska said she hopes this will improve as private accommodation and catering facility owners realize they have to provide high quality services if they want to survive the tough competition.

Over the past three years, the number of tourists from Finland, Lithuania, Latvia and Estonia has been growing. Finnish travel agencies carry pamphlets that include destinations such as the High Tatras, the Greater and Lesser Fatras and Slovak Paradise.

"After a 10-year decline, the number of visitors from Hungary has started to increase and Ukrainians are also visiting Slovakia more frequently," Budínska said.

Slovakia offers a broad selection of tourist attractions, she said. While it doesn't have a seaside, health spas and thermal open-air swimming pools that operate year-round can make up for that to a certain degree.

SACR experience shows that foreign tourists prefer the mountains and the spas, she said.

Budínska suspects the reason why Slovak spas are not as popular in other countries might be a misunderstanding about what Slovak spas are like. In Great Britain and the Netherlands, a spa is seen as a classic 'beauty farm'.

"We could potentially attract a large number of British and Dutch visitors by offering medical spa care," she said.

More than 1.6 million foreigners visited Slovakia in 2006, up 6.4 percent from the year before.