At US Embassy, community art speaks to security

LIKE many Bratislavans, the students of the Academy of Fine Arts and Design (VŠVU) have strong opinions on the fence that's cordoned off the US Embassy from Hviezdoslavovo Square for the past three years. 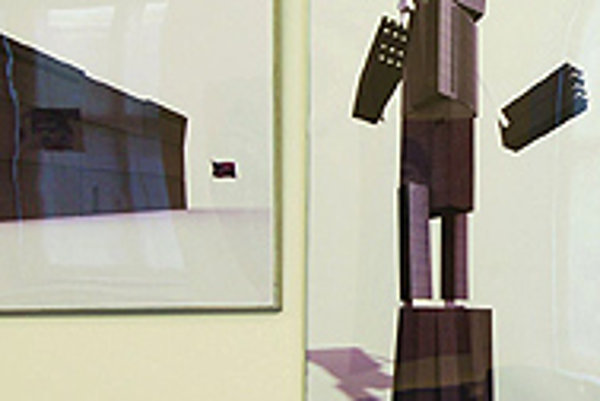 Font size:A-|A+0
LIKE many Bratislavans, the students of the Academy of Fine Arts and Design (VŠVU) have strong opinions on the fence that's cordoned off the US Embassy from Hviezdoslavovo Square for the past three years.

So when Janeil Engelstad, a Fulbright Scholar and Visiting Professor at VŠVU, began teaching a course on theory and practical skills there, feelings about the fence became one of the topics for a new project.

That project is I Have a Dream ... za plotom (beyond the fence), an art exhibit that opened at the American Embassy Art Space on April 17.

"I think the students have such strong feelings because their school is right across the street from the embassy, so it's shared space," Engelstad told The Slovak Spectator. "They feel this square is one of the most beautiful in the city, and that the fence cuts it in half, and makes people want to stay away."

Engelstad has spent much of her career inspiring communities to express the impact of current social, political and cultural issues through art. In 1999, she worked with youths from Los Angeles to create Color Wars, a project that used colors and murals to relate the effects of gang violence.

But I Have a Dream casts a wider net than just debating the necessity of the embassy fence.

Each of the exhibited pieces was carefully designed by the Slovak and foreign students in Engelstad's course at VŠVU.

Some combined urban and rural environments, like the works of Martin Mistrík, who placed colorful outlines of animals in the frames of the embassy windows. Others commented on tourism, a major human issue of our time, such as those by Dutch student Illah van Oijen, whose photographs show a couple exchanging position on a grass field to take a picture of each other in front of a statue.

But three works in particular stood out for me.

Matej Vakula's poignant Transformer portrays the American Embassy as a segmented block that looks sedentary, but can transform into a towering, almost robot-like figure, with a rectangular head and missile launchers for hands.

The artist gave a benign explanation of his work.

"I wanted to give the idea of a mobile embassy that could move anywhere, any time," he said at the exhibit's opening.

Štefan Papčo's Niečo sa stane (Something Is Coming) shows three framed portraits - one each of President Bush, Vice President Cheney and Secretary of State Rice . Across a doorway are three identically-framed portraits of applicants for visas to the US, with only the backs of their heads showing.

"This work is framed in the same way as the photographs of the U.S. Government officials to represent the symbolic relationship between the people who govern and the people who are governed," the artist wrote in a statement accompanying his work.

And Zuzana Šestáková's Urob si mier (Make Peace for Yourself) instructs the viewer on how to fold a piece of paper into the shape of a dove - the international symbol of peace - in order to literally "make peace for yourself." It struck me as simple and playful, yet profound.

"We're very proud that this is the first exhibition created entirely for our space," Ambassador Vallee said. "It's about creating a dialogue on security, boundaries and freedom between us and the community."

What: I Have a Dream ... za plotom and Color Wars
When: April 17-June 15
Where: American Embassy Art Space, Hviezdoslavovo Square.
To make an appointment, call 02/5443-0861 or e-mail your requested date and time to contact_bratislava@state.gov.