COLOR AND INTERACTION were the dominant themes at the world premiere of the ballet Warhol, which opened at the new SND on April 20.
But as much focus was on this colorful and daring production - the first choreographed and directed by the new head of the SND Ballet, Mário Radačovský - perhaps even more was on its venue, which opened only two weeks ago after two decades of construction. 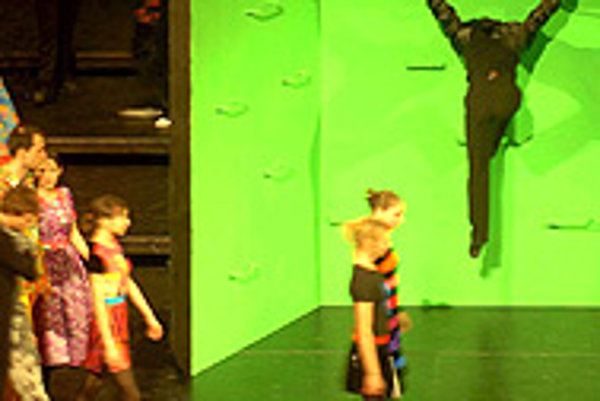 COLOR AND INTERACTION were the dominant themes at the world premiere of the ballet Warhol, which opened at the new SND on April 20.

But as much focus was on this colorful and daring production - the first choreographed and directed by the new head of the SND Ballet, Mário Radačovský - perhaps even more was on its venue, which opened only two weeks ago after two decades of construction.

True, some of the building's exterior details betray its socialist roots (such as the misshapen, incomprehensible monument that mars the fountain outside the main entrance), but when it comes to the interior, you can't help but be deeply impressed.

Much of its charm comes from how understated and hospitable the luxury inside is. Instead of high, ivory ceilings, crystal chandeliers and gold-trimmed banisters, the main hallways are naturally lit through a funnel-shaped skylight and tall bay windows; soft crimson carpets lead to the dark, wooden floors of the intimate new performance space; and glass tables line the walls near the multiple buffets, where guests can mingle comfortably throughout the evening.

The theatre also has several new interactive elements that bring it closer to its audiences. Near the main entrance is a billboard showing pictures of the evening's performance and performers. On the next level, costumes from the SND's historic opera performances are displayed in the hallway. The third level has a gallery of pictures of some of the SND's m.ost famous artists posing in the new building. And around the corner from the theatre's main entrance is an inviting stage entrance, where guests can meet and greet their favorite performers.

For those reasons, and many more, Warhol was the ideal inaugural production. A musical collage based on the life and art of pop artist Andy Warhol, whose parents emigrated to America from Miková, a village in eastern Slovakia, the piece was perfectly in synch with its environment's experimentation and boldness.

Radačovský based his choreography on four periods of Warhol's life and career: his move to New York City from Pittsburgh in 1949; his pop and portrait art in the 1960s and early 70s; his fixation on death in the 1960s; and his notorious Factory art studio, where music, art and film stars gathered for wild, drug-induced parties of creation and indulgence.

Each scene featured reproductions of Warhol's famous art and used themes and colors from it in the lighting (thrillingly designed by Jerguš Poršal) and costumes (brilliantly conceived by Katarína Holková). The most stunning visuals were in the scene entitled Heroin, in which women dressed as fluorescent flowers floated by in a haze as Warhol and his entourage at the Factory threw down their inhibitions in the background.

Igor Holováč was a compelling and powerful Warhol. A dancer of relatively small physique, his style ranged from gymnastic control and plasticity in the scene entitled New York to booming authoritativeness in much of the rest of Radačovský's athletic, demanding choreography.

During intermission and even during one of the scenes in the ballet's second part, the ballet made extra clear that audience interaction was essential to the production by sending Holováč (dressed as Andy Warhol, of course) into the audience to be chased after and photographed by an adoring entourage. This could've come across as gimmicky, but it worked because Warhol's art and the character of the whole evening emphasized the role of the surroundings in the appreciation of art.

But other than its choreography and performers, Warhol's greatest triumph was in bringing experimentation and modernism onto the stage of the SND. For any ballet company to stay relevant in today's world, it must give its classically trained dancers modern dance, set to modern music. The audiences demand it, but only Mr. Radačovský had the courage and leadership to deliver it.