PRIME MINISTER Robert Fico and Foreign Minister Ján Kubiš planned to talk to Russian President Vladimir Putin about the proposed American anti-missile shield in Europe during their one-day visit to Moscow on May 4. But they would be presenting vastly different views on the matter. 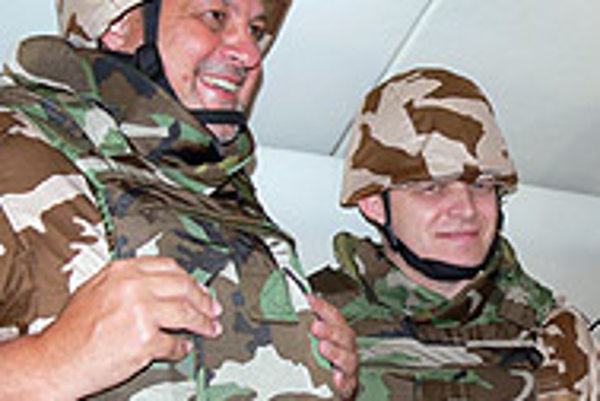 Font size:A-|A+
PRIME MINISTER Robert Fico and Foreign Minister Ján Kubiš planned to talk to Russian President Vladimir Putin about the proposed American anti-missile shield in Europe during their one-day visit to Moscow on May 4. But they would be presenting vastly different views on the matter.

Fico and Kubiš were to travel to Moscow for a day of meetings with Putin and Russian Prime Minister Mikhail Fradkov. The Slovak defence, transport and economy ministers were also to be on the trip, along with Slovak businessmen.

A key issue was expected to be an anti-missile shield proposed by the United States to protect against missiles from countries like Iran or North Korea. The shield would include a radar station in the Czech Republic and an anti-missile base in Poland.

Putin has come out strongly against the plan. Fico said he would tell Putin that he would never agree with such a move in Slovakia.

To the surprise of other NATO member states, Fico said during his recent visit to Germany that he understands Putin's concerns about the anti-missile system.

"I understand that there is a great worry there, but who would not be afraid when some missile or radar bases are starting to be built in his close vicinity?" Fico said on April 27 in Germany, during his meeting with the prime minister of the German federal state of Rhineland-Palatinate, Kurt Beck.

Fico's spokesperson, Silvia Glendová, told the media that the government has never addressed this issue, nor has it passed any resolution connected with it, so the prime minister was not presenting any government standpoint on the issue.

"This is his personal opinion as the party chairman," Glendová told the Sme daily.

He compared the radar to the American Pershing missiles: "The threat is exactly the same."

The Russian president later said that Russia does not feel bound to observe the Treaty on Conventional Forces in Europe from 1990. He justified it with the argument that not all EU countries have ratified it, including Slovakia.

Jaap de Hoop Scheffer, Secretary General of NATO, and US Secretary of State Condoleezza Rice said they see no real reason for concern.

"Putin's message was received with great fear, disappointment and regret," he said.

The former Slovak ambassador to the United States, Martin Bútora, was concerned by the extent to which Fico echoed Putin's opinions about the anti-missile shield.

"Unfortunately, certain signals are being sent by such comments," he said. "They suggest that the Slovak prime minister is inclined to express a stance with a direct or indirect anti-American sentiment wherever possible.

"It does not mean that the discussion about the planned anti-missile shield is not legitimate. The way in which Robert Fico expressed himself is in question, how unequivocal and categorical he was. And with these words, he played into the Russians' hands even before the start of the visit. It was a diplomatic gesture against Poland, the Czech Republic and the United States."

Unlike Fico, the Slovak foreign minister supports the plan for anti-missile bases, saying they would contribute to security. Kubiš, who was nominated to his position by the ruling Smer party, has defended the plans several times.

"Our allies will contribute with their planned steps, which they are discussing today, to boosting the security in the whole region," he said.

Kubiš was scheduled to talk about foreign policy in Moscow.

"The prime minister and I agreed that I will discuss these issues first," he said shortly before the departure. "I will also have a separate discussion with the Secretary of the Russian Security Council, Igor Ivanov, that will include anti-missile defence issues."

Kubiš said several times that he did not find it strange for the foreign minister to have a different opinion than the prime minister.

"In this way, rifts are uncovered and that can never be good," he said. "It can be problematic especially because we are not coming to a country which is our unconditional ally, but a mere partner."

Another problem, Bútora said, is the fact that in Russia, where a presidential election is looming, tension is growing towards Slovakia's allies in the European Union and NATO.

"We hear critical words against our allies, Poland and the Czech Republic, coming from Russia," he said. "And also against Estonia, another of our allies ... there is literally a campaign.

"The European Union and NATO have expressed objections against this. In such a sensitive situation, Robert Fico should consider every word, and not be blatantly inclined to Putin's side."