Observers: Veteška no challenge to Mečiar

WITH ABOUT A month to go before the Movement for a Democratic Slovakia's (HZDS) national party congress, observers aren't putting much stock in the candidacy of party vice-chairman Viliam Veteška - the second person ever to challenge Vladimír Mečiar for the top post during the party's 16-year history. 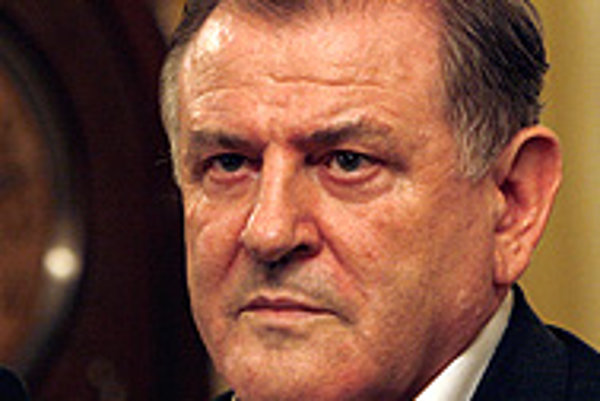 Font size:A-|A+0
WITH ABOUT A month to go before the Movement for a Democratic Slovakia's (HZDS) national party congress, observers aren't putting much stock in the candidacy of party vice-chairman Viliam Veteška - the second person ever to challenge Vladimír Mečiar for the top post during the party's 16-year history.

"Veteška has no agenda of his own," political analyst Miroslav Kusý told The Slovak Spectator. "He basically has nothing that he would like to do different from Vladimír Mečiar ... He honours Mečiar, praises him, yet he is running [against him]."

Veteška announced on April 17 that he would run for the post of chairman at the next national party congress on June 9 in Nitra.

He has not responded to a request from The Slovak Spectator to specify his reasons for running, but he told the Markíza TV channel on April 17 that he was running because of declining support for the HZDS.

"It has been declining more and more," he said. "We have lost more than one million voters since the establishment of the HZDS."

"The HZDS started collaborating with the former ruling coalition, which caused a decline in voter support for the party," he said three days later on the De Facto talk show on the Joj TV channel. "Silly mistakes were made. The voters have seen through us and they have stopped trusting us."

Kusý said Veteška was right when he claimed that HZDS was in crisis.

"However, whether this crisis could be solved by removing Mečiar - that remains questionable, in my opinion," he said.

Moreover, Kusý thinks HZDS members do not care about the party platform, but rather about Mečiar himself.

"Mečiar has always been God to them, always," he said.

Since the candidacy of Milan Kňažko, Mečiar's first and only other challenger, in 1993, it has never occurred to anyone besides Mečiar to run for the party presidency.

Veteška has also expressed his loyalty to Mečiar numerous times.

"As long as Vladimír Mečiar lives, he will be the chairman of the HZDS," he said on the Slovenský Rozhlas public radio station in 2005.

Even after Veteška announced his candidacy, he has still continued to publicly praise his party boss and current rival.

When asked in an interview with the Pravda daily on April 19 what Mečiar was like as a chairman, Veteška said: "Probably a good one, or even brilliant. Remember, he loses but he still performs. He is ambitious, he can succeed in convincing and persuading everybody. He is super."

Media have started to speculate that Veteška might have decided to run for the HZDS leadership after a deal with Prime Minister Robert Fico's Smer party. The idea is that Veteška's candidacy would cause a split in Mečiar's party and Veteška and his faction could join Smer later.

However, Kusý does not think this is very probable.

"That does not make too much sense," he said. "[Veteška] held quite a strong position in parliament for the HZDS. In the last term, he was the vice-speaker of parliament and the chairman of the party parliamentary club. He is the party vice-chairman."

Instead, Kusý suspects Veteška started to feel pressure from Mečiar, who has gotten rid of anyone in the party he perceived as a competitor or rival, and announced his candidacy in order to save himself.

"Maybe Veteška has sensed such signs and the impending danger. Veteška has been a servant until now, but he has appeared in public too much, and he has started to be a famous face, and this probably annoys Mečiar. Mečiar wants to be the one who represents the party."

"Mr. Veteška has a chance, a big chance to succeed in the secret ballot for the post of chairman, the executive chairman," he told STV, the public television channel, on April 18.

"We propose that Mečiar stay in the party as its honorary chairman and Veteška become an executive chairman."

The only regional congress that has taken place so far - on the last weekend of April, in Košice - supported Mečiar unanimously.

Immediately following the congress, Mečiar told the media he was thankful for the region's support.

Veteška absolutely refused to admit the possibility that he has already become the "crown prince" in Mečiar's party.

"In the HZDS, there has never been a crown prince," he said. "That is not a fashion there and it would never be allowed. I say that absolutely openly because that is the way things are."

If Mečiar is no longer chair of the HZDS, the party structure will probably change dramatically, Kusý said.

"After some breaking up, another, new party would be born," he said. "Like after Milan Kňažko left, the Alliance of Democrats of Slovakia emerged; or after the departure of Ivan Gašparovič, the Movement for Democracy," he said.