Save a trip to the cash machine

CUSTOMERS paying by bankcard might soon hear a new question at Slovak supermarket check-outs: "Would you like cash back?"
Cash back service lets retail customers add an extra amount of money to their bankcard purchases that they can keep in cash. For instance, a customer paying for Sk1,000 worth of purchases might also ask for Sk1,000 cash back - the customer will pay a total of Sk2,000 with the card, but will receive Sk1,000 in cash. 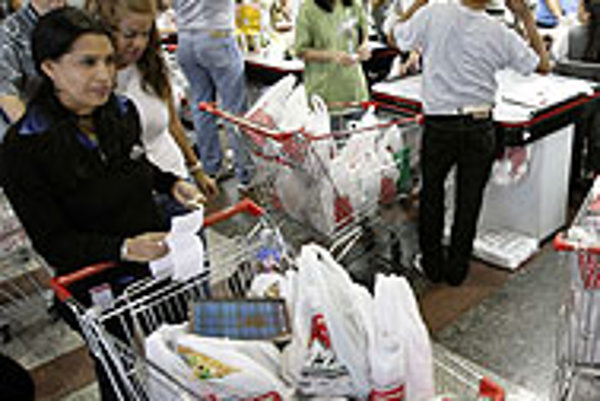 Font size:A-|A+
CUSTOMERS paying by bankcard might soon hear a new question at Slovak supermarket check-outs: "Would you like cash back?"

Cash back service lets retail customers add an extra amount of money to their bankcard purchases that they can keep in cash. For instance, a customer paying for Sk1,000 worth of purchases might also ask for Sk1,000 cash back - the customer will pay a total of Sk2,000 with the card, but will receive Sk1,000 in cash.

The service is widely known and popular in the US, Canada, Great Britain and the Netherlands, and has already been offered to Hungarian, Polish and Czech bankcard holders.

Slovenská Sporiteľňa is looking at introducing the service in the first quarter of 2008, according to the head of the card products department, Juraj Tomanka.

The ČSOB bank became the first bank in the Czech Republic to offer cash back at the end of 2006. However, the service is only targeted at their own clients who can use it for free in Albert and Hypernova supermarkets.

In Slovakia, however, all the banks that agree to offer the service will introduce it at the same time, said Roland Katona, the manager of the cards department for ČSOB in Slovakia.

The cash-back service will be convenient not only for customers, but for retailers as well - they usually pay a percentage of their transactions to banks as a commission, with the rate changing based on their revenue. A higher revenue results in a lower commission fee, leaving supermarkets in a better position than smaller merchants.

Supermarket chains will be the main retailers that offer cash back, Katona said.

Katona said the card associations (Visa and Mastercard) initiated the practice by offering cash back to the bankcard market. Banks and retailers are now about to discuss the details of the service - such as the withdrawal limits, the minimum purchase price required to get cash back, and whether the service should be free of charge.

However, there are several other steps to be made before Slovak bankcard holders can receive cash back. Work on setting up the service is expected to start this autumn and clients should be able to use it by next spring. The preparations will involve setting up point-of-sale terminals, as well as promoting the service to retailers and clients and training retail employees to use the system.

Katona said the service will not have any impact on bank clients.

"I know that cash back exists but I haven't been offered it yet and the Czech branch hasn't informed me about it," he told The Slovak Spectator.

He added he would welcome the service, especially if it was available in all shops and if the Slovak branch of ČSOB offered it as well.

"I could kill two birds with one stone using the cash back service," he said, explaining that he only uses his bankcard to pay for shopping and take out cash.

The Czech ČSOB bank hasn't published any information about the number of clients who have used the cash back service, nor their feedback on the service. However, bank experts expect it to become popular in Slovakia.

"Sooner or later people will adopt the service, especially now that the European Union has declared war on cash," said Katona. He added that bankcards will also become the main form of payment here when Slovakia adopts the euro.

Eight out of 10 people in Slovakia own a bankcard, according to the Slovak Bankcard Association.

The number of non-cash transactions in shops grew by 300 percent compared to 1996.

"However, the scales will soon tip as customers pay for their shopping by card more and more."

Katona said he mainly uses his bankcard to pay for purchases on the internet and in shops.

"I don't like paying in cash and it bothers me if I have to give instructions to the staff at the terminal because they can't handle it," Katona added.

The older generation has the fewest bank account owners and thus the fewest bankcard holders. Anna Slezáková, 74, from Dlhá nad Váhom (a village with a population of 890 in southwest Slovakia) has never used a bankcard in her life.

"A bank account would only mean more fees for me," she told The Slovak Spectator. "I prefer to be able to see my money, know exactly where it is and be able to use it whenever I need to."

"A bank account wouldn't save my feet," she said. "I would still have to go to the cash machine anyway."

She added she would probably have to carry her PIN code with the card because otherwise she might forget it, but then she would be afraid of thieves.

"There's a difference if thieves steal my purse with 500 crowns or if they steal my bankcard with all my earnings on it," she said.