ANOTHER MAJOR international banking house has entered the Slovak market, which is already supporting five major banks.
The Netherlands-based ABN AMRO Bank N. V. announced on April 19 that it was opening an official branch in Slovakia as part of its Eastern European market strategy. 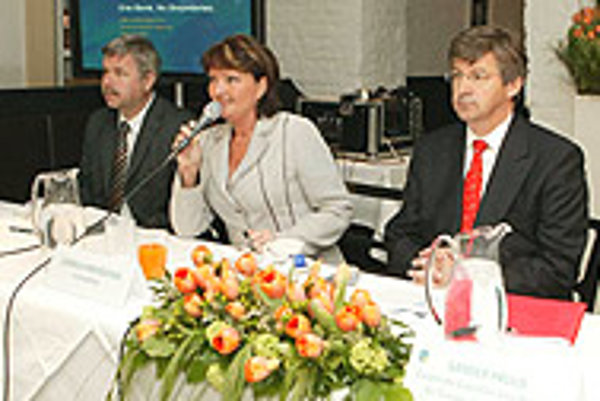 The Netherlands-based ABN AMRO Bank N. V. announced on April 19 that it was opening an official branch in Slovakia as part of its Eastern European market strategy.

Up until then, the bank had only had an office in Slovakia.

The bank promises direct access to its international network and a range of products in financial consulting, acquisitions and mergers, bonds and transaction banking.

"The bank is confident about its strategic move towards Slovakia," said branch head Anders Ljunggren, the bank's executive director for the Czech Republic and Slovakia.

"However, the bank's strategic focus is on the medium-sized segment of the market, where we have a competitive advantage," said Ljunggren.

First ABN AMRO will have to build its client base. It will offer local services tailored to Slovakia, such as local payment and clearing solutions. The bank's trading team in Prague will serve the Slovak market using its global trading network, Ljunggren said.

"I believe that this foreign bank branch will contribute to an increase of mutual competitiveness on the Slovak bank market," Šramko said.

Some banks already on the Slovak market are similar to ABN AMRO in their size and focus, such as Calyon, Commerzbank or Citibank, HSBC and ING, said VÚB bank chief economist Zdenko Štefanides.

"In Slovakia, a number of banks specialise in corporate and investment banking," he told The Slovak Spectator.

However, much more significant on the Slovak domestic market are banks that focus on individuals, retail clients and small- and medium-sized companies.

In total there are about 24 banks and branches of foreign banks on the Slovak market, Štefanides said. Apart from the top five banks - VÚB, SLSP, Tatra Banka, ČSOB and Unicredit Bank - major players on the domestic retail market include smaller banks like Dexia Banka, OTP, Istrobanka and Ľudová Banka.

A spokesperson from one of ABN AMRO's Slovak competitors, VÚB bank, says the Dutch bank will have a tough time making any significant inroads.

"The competition on the Slovak banking market is relatively strong so it will not be easy for ABN AMRO," VÚB bank spokeswoman Alena Walterová told The Slovak Spectator.

She said VÚB expects that ABN AMRO will focus mainly on international corporate clients that are using its services abroad and also operate in Slovakia.

Dexia Bank will react to the new bank by continuing to focus on the quality of its services and the satisfaction of its clients, said Dexia Bank Slovensko spokesperson Michal Fúrik.

"Dexia Bank will continue in its strategy of increasing its share on the retail market by coordinating activities with the international level of the Dexia group," he told The Slovak Spectator at the branch opening.

Dexia will continue focussing on identifying and understanding the needs of its existing and potential clients in developing new products and services, he added.

ABN AMRO Bank N. V. is a leading international bank with a total liquidity of €987 billion as of December 2006. It has more than 4,500 branches in 53 countries, employing more than 105,000 people. It is listed on the Euronext and New York stock exchanges.

ABN AMRO Bank opened its first office to serve the Czech and Slovak republics in Prague in 1991, and in 1993 this office became an official branch. It currently employs 115 people in the Czech Republic and Slovakia.

The map of districts changed again. Only three remain in the red tier