Ariadne another victory for modern stagings at the SND

THINKING about the Slovak National Theatre's (SND) updated version of Richard Strauss' Ariadne auf Naxos, which premiered on April 27, has led me to conclude modern opera productions are, in the words of Forrest Gump, like a box of chocolates: you never know what you're gonna get. 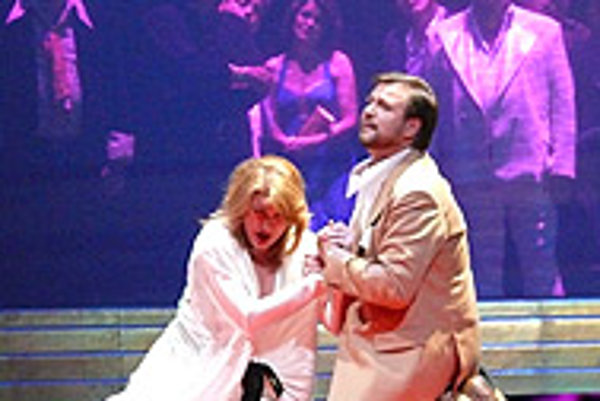 Composed by: Richard Strauss, Libretto: Hugo von Hofmannsthal, based in part on Greek mythology
Conducted by: Walter Kobéra
Where: Slovak National Theatre (SND), Hviezdoslavovo Square, Bratislava
Next performance: May 24 at 19:00
Performed: in German with Slovak subtitles
Rating:8 of 10

THINKING about the Slovak National Theatre's (SND) updated version of Richard Strauss' Ariadne auf Naxos, which premiered on April 27, has led me to conclude modern opera productions are, in the words of Forrest Gump, like a box of chocolates: you never know what you're gonna get.

Take, for instance, the SND's last four seasons, which have seen three major modern productions by as many renowned, international directors.

In March 2003, Jiří Nekvasil of the National Theatre in Prague imported his highly anticipated interpretation of Dvořák's Rusalka, in which he updated the plot by adding modern references, such as drug-addicted hippies, Coca-Cola cans, and an abandoned car. Though I supported the director's bravado, I had reservations about the production, which ended up being mercilessly panned by local audiences and critics alike.

But in September 2005, German director Peter Konwitschny's production of Tchaikovsky's Eugen Onegin was an all-around success. Though at least as revolutionary as Rusalka for its abolition of the fourth wall, it struck SND audiences as more genuine, and respectful of the opera's cherished libretto. On opening night, it was Konwitschny, not the evening's soloists, who received the loudest ovation.

And just two weeks ago, Ariadne auf Naxos, which originally premiered in 1912, opened at the SND with a set design modeled on Andy Warhol's art studio and singers dressed modernly in elegant evening wear. It was directed by Swiss director Dieter Kaegi, who's staged numerous provocative productions at Opera Ireland in Dublin since becoming its artistic director in 1998.

Knowing Kaegi visited the SND in 2005 specifically to see Konwitschny's production of Onegin, and admired it greatly, my assumption is he aimed for Ariadne to strike a similar balance between edginess and reverence. He succeeded.

Set in the house of "the richest man in Vienna," Ariadne auf Naxos has two distinct parts. The first, a prelude, gives a behind-the-scenes look at a histrionic young composer's struggle to maintain artistic integrity in the face of a meddling patron. The second is the composer's opera, a version of the Greek myth of Ariadne, in which she is rescued by Bacchus after being abandoned on the island of Naxos.

In the prelude, Kaegi and his costume/set designer, Stefanie Pasterkamp, evoked the colors, props, and frenetic energy of Andy Warhol's wild, drug-induced parties of the 1970s to give a present-day twist on the raw creativity and decadence of upper-crust, early Vienna.

And, in another bold move that was the centerpiece of the production, Kaegi connected the opera's two parts to make one complete work, in which the entire cast was constantly onstage, either observing the action from a couch on the sidelines or participating in it.

"I wanted to achieve a mixture of fiction and reality," Kaegi told The Slovak Spectator. "The images and characters were meant to overlap until the audience is left wondering whether it's all a dream - perhaps the composer's, or their own."

And it worked. The production's only downside was that some of the performers looked insecure, such as Iveta Matyášová (Ariadne), whose warm sound and delicate phrases perfectly matched Strauss' sultry harmonies, but whose dramatic moments with tenor Sergej Larin (Bacchus) lacked genuine commitment and abandon. Perhaps more rehearsal, or further discussion with the director, was needed.

Others seemed liberated by the staging. Ľubica Vargicová (Zerbinetta) brought the audience to its feet as she twirled in her pastel gown and soared through a stunning rendition of the showcase coloratura aria Grossmächtige Prinzessin.

It only goes to show that with the right director, audience, and performers, the SND can put on fascinating new productions.