THE NATION'S Memory Institute has published another list of former members of the ŠtB Communist secret police, this time of the counter-intelligence corps for Slovakia, the feared "XII Division". 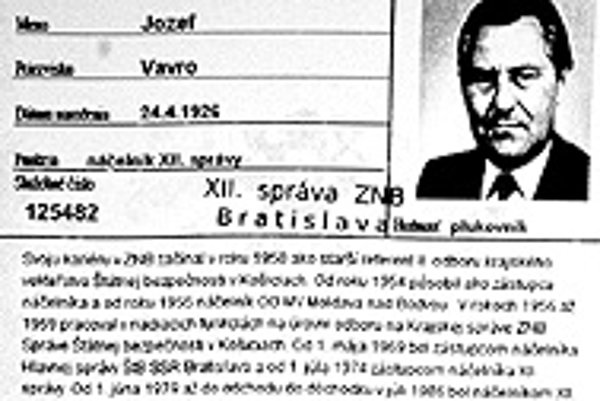 Font size:A-|A+
THE NATION'S Memory Institute has published another list of former members of the ŠtB Communist secret police, this time of the counter-intelligence corps for Slovakia, the feared "XII Division".

As an executive branch of the Czechoslovak Interior Ministry, the XII Division was in charge of counter-intelligence in the Slovak half of the federation.

The head of the Nation's Memory Institute, Ivan Petranský, said the 'outing' of 764 former ŠtB officers would provide new information on how the Communist secret service worked (the list of names can be found at www.upn.gov.sk). The published material also includes pictures and resumes of top XII Division officers, and classified documents.

"The names that we have published probably won't be known, because the public didn't know them, but they are not victims," Petranský said. "They are people who actively participated in the repressive activities of the state security forces and the Communist regime."

Petranský promised to publish the names of former officers with regional Communist security forces in the near future.

The Nation's Memory Institute administers and publishes documents related to the security activities of Slovakia's former totalitarian regimes: fascism (1939 to 1945) and Communism (1948 to 1989).

The Institute's Jerguš Sivoš worked on the XII Division project for an entire year. Sivoš said the division had been created in 1974 at the orders of the federal Interior Ministry, and that it had fallen first under the authority of the deputy interior minister, and from 1985-1988 directly under the minister. It was led by a director with two deputies

The XII Division had six sub-sections. The first combated "the enemy from abroad", i.e. foreign intelligence services operating within or against Czechoslovakia. It kept tabs on foreign embassies, the various UN institutes in Bratislava, the Foreign Ministry press agency, as well as travel agencies and foreign journalists.

The second sub-section fought "the enemy within", i.e. domestic opponents among "the right-wing", the cultural and scientific communities, youth, school and sports. A special group was set up in 1977 to handle churches and religious sects.

A third sub-section protected the economy, especially Czechoslovakia's foreign trade, keeping a close watch on branches of foreign companies in Slovakia, international fairs in Bratislava (especially at the Incheba expo site, which is still in use), and the penetration of foreign intelligence services and monopolies into the Czechoslovak economy. The economic section was also responsible for supervising research and development, and the planning and financing of the national economy.

The fourth sub-section XII Division was in charge of surveillance, while the fifth monitored correspondence, and the sixth placed bugs and surveillance equipment into buildings and other locations.

Previously, under the directorship of Ján Langoš, who died last year in a car crash, the Institute had published the names of ŠtB agents and collaborators in Slovakia.