INDUSTRY EXPERTS met in Bratislava on May 4 for the second annual Air Transport Conference, "Business in the Sky". The agenda included issues such as the role of the government in the air transport industry, traditional versus low cost airlines, problems at airports, and recent trends in the aviation business. 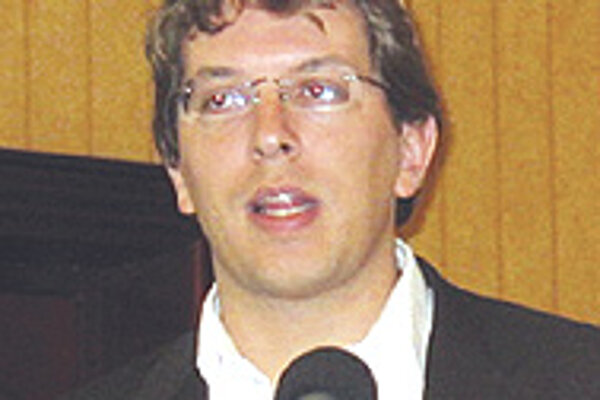 Font size:A-|A+0
INDUSTRY EXPERTS met in Bratislava on May 4 for the second annual Air Transport Conference, "Business in the Sky". The agenda included issues such as the role of the government in the air transport industry, traditional versus low cost airlines, problems at airports, and recent trends in the aviation business.

The conference, organised by EastEurolink (a company providing event management for Central and Southeast Europe), was held under the auspices of the Transport, Post and Telecommunications Ministry. Its aim was not only to present the latest ideas and research in the aviation industry, but also to give attendants the chance to network. The conference was opened by the state secretary of the Transport, Post and Telecommunications Ministry, Milan Moiš, who was standing in for his head, Minister Ľubomír Vážny.

Also in attendance were foreign government authorities, including Herbert Zulinski from the Austrian Transport Ministry, who spoke about the problems that Austrian airports have to deal with, such as security, climate change and capacity.

"Capacity is our greatest problem and will require the largest investment," Paulínyová told The Slovak Spectator. She added that the most critical time of the year is now approaching.

More than 1.9 million people passed through the airport last year, which was an 83 percent increase in the number of passengers since 2000. However, the airport is not expecting any complications during the peak season. Paulínyová said the airport has a capacity of 2.2 million people.

Paulínyová also said the airport is planning to modify processes in accordance with Schengen rules and will build a second terminal by 2011. When asked about financing, Paulínyová said the expenses will be partially covered by the airport's own financial sources as well as by European funds or bank loans.

The airport was almost privatized by the TwoOne Consortium last year. The consortium did not receive approval from the Anti-Monopoly Bureau, however, and thus the privatization was cancelled.

Jiří Pruša, Czech chairman of CEE Travel Systems (a travel trade technologies company), has been involved in the aviation industry for all of his professional life. When analysing the options of a state-owned and privatized airport, he said the privatization might be more efficient for the airport in general.

"When the airport is privatized, the decisions are made faster and the company pours more financial resources into the airport," Pruša told The Slovak Spectator.

Traditional and low-cost airlines in Eastern Europe were also compared at the conference. These discussions involved presentations given by David Henderson, an information manager from the Association of Europe Airlines, Kim Flenskov, the managing director of Lufthansa Consulting, and Christian Mandl, the chairman of SkyEurope Airlines.

Mandl, whose company is the market leader in the Slovak airline industry with a 47 percent market share, spoke about the next steps to be taken and the "Go East" strategy, appealing to a total estimated market of 401 million people, as compared to the US market with 297 million and the EU market with 383 million.

In addition to the fact that it is a significant market, Mandl said other reasons to expand east include "poor alternative means of transportation" in Eastern Europe and the fact that most competitors in the region are "weak or sub-standard".

The conference wrapped up with a presentation entitled "Future Traveller Tribes 2020", which offered a vision of the future of the aviation industry.