TAKE EIGHT co-workers whose daily personal contact is limited to a couple of phone calls and the occasional passing "hello", and send them all down the river in a raft. This is not part of a new layoff strategy, but is rather what human resource experts call 'experimental team building', which, when successful, should see the group leaving the raft as a functioning team. 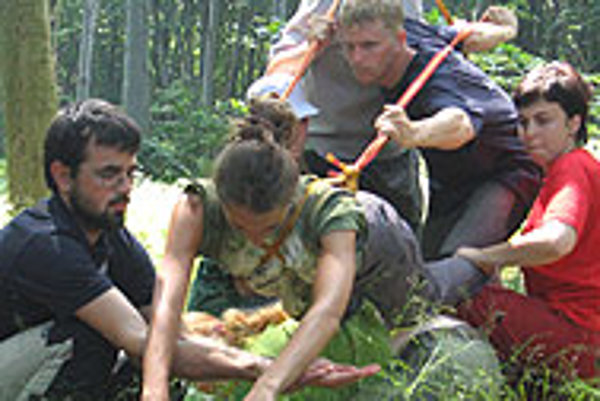 Font size:A-|A+0
TAKE EIGHT co-workers whose daily personal contact is limited to a couple of phone calls and the occasional passing "hello", and send them all down the river in a raft. This is not part of a new layoff strategy, but is rather what human resource experts call 'experimental team building', which, when successful, should see the group leaving the raft as a functioning team.

Event season has started for team building agencies and their closely related 'team spirit' agencies. Both types of agencies reported that there is an increase in demand every year, but also that this year has been exceptional.

"We don't even have to approach the companies because the firms contact us themselves," said Zuzana Martinovičová, the co-founder of Adventure-svk. Adventure-svk arranges company excursions, or 'team spirit events'. Martinovičová added that the busiest period for the company is between February and March and from September to mid-November.

May to October is the busiest time of the year for the Quinta Essentia team building agency, said its manager Miloš Zágoršek.

According to Zágoršek, they sometimes prepare programmes for up to 20 companies a month during peak season, compared to sometimes no more than three a month during March and April, the quietest time of the year for the agency.

Experiential team building aims to advance cooperation within a team, teach people to understand their roles and increase motivation.

"The core of experiential team building, unlike team spirit activities, is learning through experience, not just the experience itself," Surma told The Slovak Spectator.

Experiential team building agencies give teams a task to complete. This might involve building a wigwam camp, rescuing an "injured" person in difficult terrain or abseiling down a cliff. The activities are aimed not only at providing an experience for each participant, but also at strengthening the feeling of being part of a team.

Trainers observe the team members' behaviour while they are working on a task, direct them and afterwards provide them with feedback and analysis. However, Surma said that the result of the task is rather irrelevant.

"Participants test their own limits while at the same time relying on their colleagues," Surma said. "People in a team learn to trust each other, which strengthens the team as a whole."

Getting into the spirit

While team building normally involves about 30 participants, hundreds of people can take part in a team spirit event. Adventure-svk usually prepares team spirit programmes for 40 to 100 people. The price of a team spirit event for 40 people comes to around Sk70,000 (€2,080).

"We often prepare events for people who work for the same company, but have communicated with each other mainly by phone," Martinovičová told The Slovak Spectator. She added they usually get a lot of positive feedback from clients after the event.

One popular offering is a ride in an air-ball (a massive inflatable ball, 3.5 metres in diameter, with a smaller ball inside).

"Our aim is to create an informal atmosphere and ensure that the participants are entertained," Martinovičová said.

As to whether the team building events received positive feedback, Maťašovič simply said: "People like to play, especially adults".

The reasons for taking part in experiential team building vary with each company. It may be due to organizational changes in the team, such as when a new colleague or a new team leader joins the group. It could be because the company wants to set a new vision and new objectives for the work group. Maybe the team needs restructuring that requires that the team adapt to new habits and grow out of old patterns that no longer work for the company.

A common factor is the so-called burn-out effect, where the team starts to work inefficiently due to hidden conflicts or a lack of communication.

Team building is not intended to provide technological know-how or identify which employees should be laid off, Maťašovič said. However, companies sometimes use team building when deciding between two candidates for a manager position, he added.

"Team building shouldn't only be entertainment and socializing without a significant purpose", Maťašovič said. Surma and Zágoršek agreed that in team building activities, the company contacts the agency with a certain aim in mind. For example, the Coop Jednota Slovensko supermarket group hired a team building agency to improve interpersonal communication between three of its teams.

"We consulted with the agency and they tailored the activities for us," Lucia Špinerová, a personal manager at Coop Jednota, told The Slovak Spectator.

The company decided to organise a team building programme after seeing the results of a personnel audit. Participation in the programme was strongly encouraged though employees could discuss the issue if they had any objections, the result of the audit was clear - the three teams had to improve their communication.

"The employees were provided with a schedule of trainings several months prior to the team building activities," Špinerová said. She added that most of the employees were looking forward to the activities and the feedback was even more positive after the programme ended.

Surma said that experiential team building events usually start with an icebreaker activity that should get people relaxed and break down personal barriers.

The outdoor activities usually finish indoors at the end of the day. Team building participants can have some refreshments and chat or play games that do not require physical activity.

One of the most popular team building games is called Casino, a game where participants play for tokens.

"The game is very popular," said Zágoršek. "Especially when a manager puts in a token saying that he will make coffee for one of his colleagues."

The first Outward Bound was established by German professor Kurt Kahn in the UK in 1941. He created a team building programme for sailors aimed at teaching them survival skills, raising their self confidence and strengthening their ability to work as a team.

Outdoor experimental team building entered the Slovak market in 1998. The first company to offer the service was Outward Bound - Štúdio Zážitku, Surma said, adding that in the beginning they had to rely on people who had already heard about this kind of team building.

"Our first customers were foreign managers who had participated in experiential team building in their mother company," Surma told The Slovak Spectator.

Outward Bound - Štúdio Zážitku, along with Project Outdoor Slovakia, Maxman Consultants and eight Czech organisations, all belong to the Czech and Slovak Association for Experiential Learning founded in 2005.

The association regulates the agencies with the aim of guaranteeing the safety of clients, and ensuring that guidelines are followed.