Help in the fight for kids' attention

IN AN AGE of computer games, television and the internet, it is becoming increasingly difficult for teachers to hold their students' attention. In order to compete, many have taken advantage of the Innovative Teachers Network, a programme organised by the software giant Microsoft that includes an online portal for teachers (Modernyucitel.net) and workshops to help keep teachers up to date on the latest in information technologies. 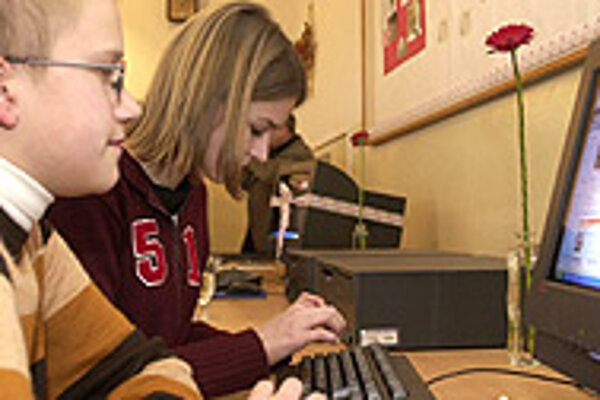 Font size:A-|A+
IN AN AGE of computer games, television and the internet, it is becoming increasingly difficult for teachers to hold their students' attention. In order to compete, many have taken advantage of the Innovative Teachers Network, a programme organised by the software giant Microsoft that includes an online portal for teachers (Modernyucitel.net) and workshops to help keep teachers up to date on the latest in information technologies.

The Innovative Teachers Network was started in Slovakia in April 2005 and the internet portal was launched in October 2005. Since then, hundreds of virtual communities of teachers have been created and thousands of educational materials have been made available to members.

Around 6,000 teachers have registered with Modernyucitel.net, and Miriam Madrová, Microsoft's spokeswoman in Slovakia, said the education community has shown great interest in the portal.

Jana Kamenská, a teacher at an elementary school in the town of Lučenec (Banská Bystrica Region), said the network helps teachers share materials and techniques they use in the classroom.

"Each teacher can use the materials there, offer their experiences, find colleagues that have come across similar problems and share the joy of success," she told The Slovak Spectator.

Kamenská said that the network helps her prepare for classes better and makes things more interesting for the students.

"I get the chance to review a lot of valuable material that I can, as an administrator, recommend to teachers in my school or use myself," Martina Chalachánová, head of a grade school in Zvolen (Banská Bystrica Region) told The Slovak Spectator. She said that thanks to the network, IT systems are more widely used at the school.

Chalachánová found out about the network at the end of 2005 and took interest in it immediately. She liked the idea of gathering a collection of materials on the internet and creating communities of teachers with the same specialization or style of teaching. She decided to be an active participant of the Innovative Teachers Network's internet portal and set up a community from elementary school teachers, supplying it with her own materials first.

The community now has 110 members and four teachers who actively contribute to it. In addition to contributing to the portal, Chalachánová is also a reviewer and lecturer for the Innovative Teachers Network's workshop programme.

Education Ministry spokeswoman Viera Trpišová told The Slovak Spectator that the ministry signed a memorandum of understanding with Microsoft in January 2004 and is aware that there is a virtual community of teachers being formed based on a Microsoft product. The materials are in line with the official school curriculum, she said.

The Education Ministry also organises its own projects to support teachers.

"Last year we finished a computer literacy project, training more than 53,000 teachers [in the use of IT]," Trpišová said.

Another project has been started to educate teachers in the use of IT systems in the classroom, and should see 40,000 teachers attending this year and next year, she said.

Almost all schools in Slovakia are equipped with computers and are connected to the internet. By 2010 the Education Ministry would like to see 80 percent of schools provided with a broadband connection to the internet.

"Approximately 400 schools this year will get mobile multimedia equipment consisting of a notebook computer, a projector and the eBeam [interactive whiteboard] system," said Trpišová.

This programme is being financed with EU structural funds. Trpišová said the Education Ministry will focus its efforts mainly on innovative schools on the cutting edge of methodology and technology, and struggling schools that have students with special needs or who are from a socially disadvantaged environment.