SLOVAKIA wanted a dignified commemoration of the 62nd anniversary of the end of World War Two, without the big fuss and ostentatious pomp that was so typical during socialism. After all, the point was to reflect on the bloodiest conflict in history, in which 60 million people were killed. 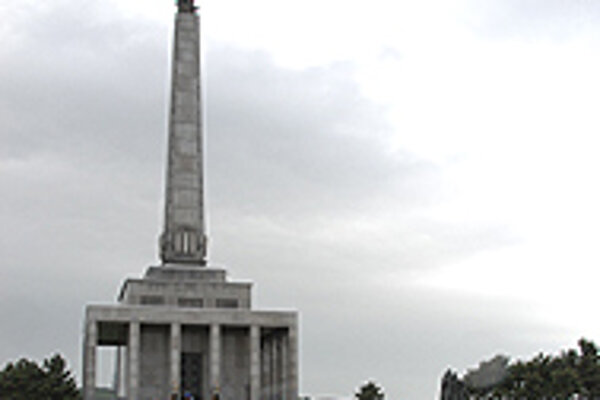 Font size:A-|A+
SLOVAKIA wanted a dignified commemoration of the 62nd anniversary of the end of World War Two, without the big fuss and ostentatious pomp that was so typical during socialism. After all, the point was to reflect on the bloodiest conflict in history, in which 60 million people were killed.

But Slovak Prime Minister Robert Fico had other plans for the day - an official visit to Austria, to be exact. So one day earlier, he led a delegation of top government representatives in a wreath-laying ceremony at Slavín, the Bratislava military cemetery in which nearly 7,000 Soviet soldiers who died liberating the capital during the final days of the war are buried.

"It is our duty to commemorate such events," he said, adding poetically: "The only cure to the cancer of indifference is deep interest, a solidarity of Slavonic hearts. Modern Slovak history is intertwined with the liberation and the Red Army. Nothing can change that, no revisionist historian."

In his speech at Slavín, Fico conveniently remembered to mention the 155th anniversary of the death of the father of Slavonic solidarity, Ján Kollár.

"Let us not be afraid to freely cultivate Slavonic solidarity," he said.

And he declared Slavín's solemn nature as a cemetery for fallen Soviet soldiers should always be preserved: "May this never become a place for skateboarding."

However, Slovak president Ivan Gašparovič was conspicuously absent from the wreath-laying ceremony. The president's spokesman, Marek Trubač, made this statement for the private TV-channel Markíza on May 8: "We only learned about the ceremony that took place yesterday on the Friday before, so Mr. President had his work schedule already set for that day."

But even the next day, the president didn't make an appearance at Slavín to honour the memory of those who died to free the city. His spokesman explained it this way: "It was not a national ceremony of a level requiring the presence of the president of the republic."

Several ambassadors attended the event at Slavín, including those of the United States and the Russian Federation. Alexander Udaľcov, the Russian ambassador, said for the TA3 news channel: "I am sorry that, for example, in Estonia, they do not have the same respect for the memory of the soldiers killed in the Second World War as Slovaks do."

On May 8, Defence Minister František Kašický also led an event at Slavín. At one point in the course of his speech, he perked people's interest by incorrectly referring to this year as the 60th anniversary of the end of the war, rather than the 62nd. Fortunately, he corrected himself.

By that afternoon, the defence minister was already attending another ceremony in Prešov, where he awarded medals to twenty war veterans after laying wreaths. In his speech, he repeated the points he had made at Slavín.

"The Second World War was mainly a fight of nations for freedom and democracy, a fight against fascist totalitarianism," he said. "It was a war, in which both soldiers on battlefronts and civilians made extreme sacrifices. And despite the division caused by this tragedy in human history, we overcame the remnants of the Second World War. Slovakia's entry into the North Atlantic Treaty Organization gives us today the best guarantee of a peaceful and universal development for the Slovak Republic."

During Minister Kašický's speech at Slavín, an elderly woman could be seen distributing small artificial carnations made of red crepe, and mounted on a wooden stick. "What did we do to deserve this?" The Slovak Spctator asked her. "You came," she answered in Russian.

For Vincent Lazor, 93, a retired colonel, who according to his own account earned thirty-four medals and decorations throughout his military career and had left the same number at home that day because he couldn't carry them all, coming to Slavín was about remembering the fallen.

"I was in the First Czechoslovak Army Corps," he told The Slovak Spectator. "We chased the fascists even after the war. Now I'm going to see one of my friends."

He pointed to the graves. "The head of the Tank Corps of Russia. He was supposed to go somewhere, and half an hour later, he was dead."

Lazor was a scout during the war. Interestingly, his memories are not all tragic.

"I was a specialist," he said. I like to think back to those times."

According to Lazor, the worst fight of the war was at Dukla, and at the end of the war near the town of Liptovský Mikuláš.

"It was hand-to-hand combat. It was dark and rainy. And because it was so hand-to-hand, I had to hit the person in front me to know whose side he was on. If he responded in German, he got a punch. If it was one of us, I said - welcome, Janko. Many soldiers were killed there. Many of us. In the morning, we found only about 10 more bodies of Germans than our soldiers."

Vladimír Švárny, a retired colonel and the Chairman of the Airmen Association, said fighters in the Slovak National Uprising (SNP) and abroad considered every battle in the war to be the worst.

"The indiscriminate killing is the worst thing about any war," he said. "That goes against the human conscience, against everything. But finally, when it is your duty to do it, you have to. We fought for putting Slovakia into the anti-Hitler coalition, to redeem it from the label of a fascist state. I fought in the SNP. First as a foot soldier, then as an executive pilot in the First Czechoslovak Air Division. We fought for the whole region of Ostrava, together with the Soviet Army. We were incorporated as the First Czechoslovak Air Division to the Eighth Airborn Army of the Soviet Union."

City representatives in Košice also honoured the end of war on May 8 by laying wreaths at Liberators' Square (Námestie Osloboditeľov), where part of a monument there acts as a cemetery for fallen Russian soldiers.

But strangely, no bodies are actually buried there. Instead, each grave is marked with a tombstone that reads only "XY is buried here" and the soldiers' remains are at the Košice cemetery.

Gabriel Kladek, an art historian, criticized this on the private JOJ TV-channel.

"I insist that we set the record straight," he said. "These people sacrificed their lives, and we're still playing games with their burial place."