From assault victim to defendant

HEDVIGA MALINOVÁ, the student from Nitra whose bruised face was splashed all over the media last August as proof of anti-Hungarian violence in Slovakia, was officially charged at the beginning of last week with making the whole story up. 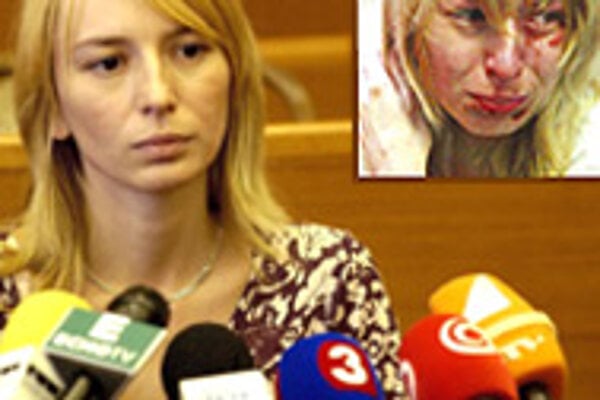 Font size:A-|A+  Comments disabled
HEDVIGA MALINOVÁ, the student from Nitra whose bruised face was splashed all over the media last August as proof of anti-Hungarian violence in Slovakia, was officially charged at the beginning of last week with making the whole story up.

"As the result of an investigation just completed, investigators decided on May 14 to charge Hedviga M. with perjury and making false claims," Martin Korch, spokesperson for the Police Presidium, told The Slovak Spectator.

Pressed on the specific reasons for the charges, and whether they were based on new information the investigator had learned, Korch answered: "As the investigation is still ongoing, we cannot reveal any further details."

Malinová's account at the time was that she had been beaten by two assailants in front of Nitra University who had heard her speaking in Hungarian while on her mobile phone.

Her story attracted wide public attention, and even responses from abroad, including Hungarian Prime Minister Ferenc Gyurcsány, who

called on Slovakia to distance itself from any manifestation of anti-Hungarian nationalism.

Complicating the matter was the fact the incident occurred just two months after the nascent Robert Fico government had assumed power in the form of a coalition with the Slovak National Party, led by controversial nationalist Ján Slota, whose notorious anti-Hungarian rhetoric once included a battle cry for Slovaks to "get into their tanks and go flatten Budapest."

The indictment against Malinová was officially delivered to her lawyer, Roman Kvasnica, several days after police went public with it. By that time, both had already learned of the charges from the media.

"This defies the principle of innocent until proven guilty," Kvasnica told The Slovak Spectator. "The decision clearly implies that investigators aren't even clear about what to charge her with."

In an interview with the Sme daily on May 15, Kvasnica again decried the treatment his client has received.

"They want to wear her down mentally," he said.

As part of its own investigation into the case, The Slovak Spectator tried to talk to witnesses who had come forward as early as last summer to say that, on August 25, 2006, they saw Malinová get beaten. But all the witnesses now refuse to talk about it, saying that they are too afraid.

An article about the case in the latest edition of the Týždeň weekly has provided some intriguing new information that the article's authors claim is based on Malinová's own testimony.

According to Týždeň: Malinová stated that on the night of November 21, 2006, someone "searched" her boyfriend Peter's apartment. When they woke up in the morning, they found all the cabinets and drawers open, as well as the door to the house and her boyfriend's car.

That same morning, while taking the bus to Nitra, Malinová encountered two women along the way. One of them sat next to her and started looking at some photographs. When the bus driver switched on a light at one point, Malinová noticed the pictures were of her boyfriend's ransacked apartment.

Malinová immediately tried to contact her boyfriend, but couldn't get through. She finally succeeded after arriving in Nitra and borrowing a mobile from her colleague. Her own mobile did not start working again until after 15:00.

Malinová gave the police the names of two friends who could confirm that until then she was not able to make any calls or receive text messages, whereas everyone else's mobiles worked without interruption.

Malinová's boyfriend confirmed the information from her testimony for The Slovak Spectator.

According to the weekly, police have already started to investigate who might have been in the house that day, but no conclusion had been reached yet as to whether it had any connection to the beating.

The case against Malinová builds

By the middle of September 2006, just three weeks after the beating allegedly took place, police had already suspended the investigation and come to the conclusion that Malinová had invented the whole story. Nonetheless, Malinová continued to insist she was attacked by two men with shaved heads, who beat her and scribbled an ethnic slur on her blouse.

Police say they came to this conclusion so quickly for a number of reasons, including the fact the handwriting of the slur on Malinová's blouse matched her own. Moreover, investigators say it was her own DNA on the stamp of the envelope in which her school papers were sent to her after the attack.

"The investigator has ceased its investigation, as it is clear no crime was committed," Interior Minister Róbert Kaliňák said during a press conference on September 12, 2006. "Several pieces of hard evidence attest to this."

Prime Minister Robert Fico took a similar tone on the case, stating for the public STV channel on September 13, 2006: "A girl was upset about not passing an exam, so she sacrificed the reputation of the Slovak Republic."

Malinová was indeed scheduled to take an exam the day of the beating, but the professor who was supposed to administer it remembers what condition Malinová was in when she arrived, and went on STV the same day as the PM to contradict his assertion.

"The student was about to take the exam for the first time, so it was not her second try. She was beaten up, assaulted, that was evident," the professor said.

Also on September 13, 2006, Béla László, the dean of the Faculty of Central European Studies at University of Constantine the Philosopher in Nitra, confirmed for the Pravda daily that Malinová was in fact beaten.

"She was in terrible condition, mentally as well as physically, so we are shocked by the results of the investigation," he said, adding that Malinová's lips remained swollen for days after the attack.

"I visited her in the hospital. She was psychically disfigured, with a red bruise on her face, and other wounds," he said.

On the other hand, Jozef Šátek, the former head of the Anti-Corruption Office, is convinced Malinová is telling the truth, and claims police have misled the public by overlooking certain important expert opinions.

For example, the handwriting expert who evaluated the slur on Malinová's dress never specifically matched it to Malinová.

"From the graphology point of view, it seems very difficult to inspect the signs of controversy, due to their minimal extent, type of script, [etc]. [Therefore], we cannot guarantee an unambiguous conclusion, even after having attained adequate comparative material," the expert's statement read.

Šátek also points out the existence of medical reports written by doctors who treated Malinová, including three that diagnosed a "concussion", "nose contusion" and "scratches on both ears."

Šátek also disputes the evidence the government has used to charge Malinová with "staging" the attack.

And finally, Šátek sheds light once again on that fact that Malinová has stated that police pressured her during interviews to recant her testimony about the assault.

Malinová has already taken her case to the Constitutional Court, where last December she filed a complaint against

the police for violating her human rights.